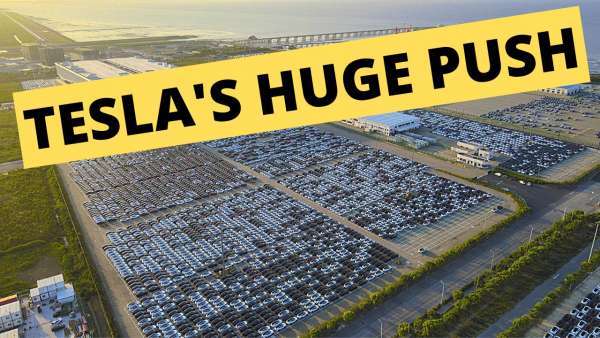 Shanghai's South Port Terminal is again filled with a huge batch of Tesla Model 3 and Model Y electric cars, ready to be shipped to reservation holders, showing Tesla is making a huge push toward its Quarter 3 results.

"Once again, the Shanghai Southport terminal surprised us with Glovis leaving just last week and the terminal was filled again this week," Twitted user Bentv_sh (Wu Wa on Youtube) who has been chronicling Giga Shanghai's production and operations for Tesla community from day one.

As could be seen in the footage, another massive batch of Teslas is about to be shipped from China, a good portion of which will likely be delivered to Right Hand Drive countries.

"Considering that Gigafactory Shanghai’s operations were slowed down last month amidst the company’s efforts to upgrade the plant’s Model Y and Model 3 production lines, it is no surprise that Tesla China is now ramping its Q3 exports. By the final weeks of August, Tesla China would likely shift its focus on meeting the demand for its vehicles in the domestic Chinese market," writes Simon Alvarez of Teslarati.

Once again, the Shanghai Southport terminal surprised us with Glovis leaving just last week and the terminal was filled again this week.@Teslahttps://t.co/c0Tc79jrlH pic.twitter.com/7lOVfIMIxq

Elon Musk wouldn’t it be amazing if the cars at the Shanghai port could FSD themselves to the ship, self - loading cargo - literally. How cool would that be?

Tesla Contemplates A New Strategy for China Retail even As Sales Boom
Jay Leno on Elon Musk & EVs: “I Think He Should Get ... Credit"
END_OF_DOCUMENT_TOKEN_TO_BE_REPLACED