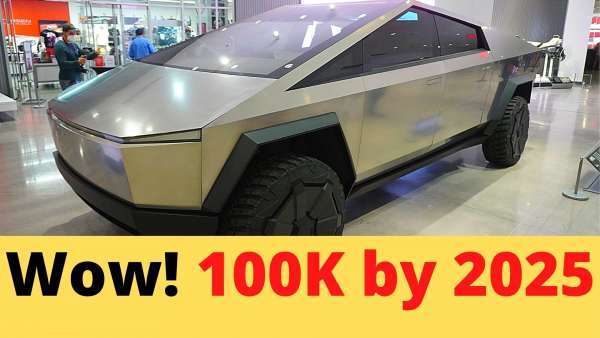 In a new update on Tesla Cybertruck Morgan Stanely estimated that Tesla would produce just under 100,000 Cybertrucks by FY 2025 in a report about 6 key considerations that mattered to the EV startup.

This is kind of a conservative update on the Tesla Cybertruck's production, yet, it has to do not only with Tesla's capacity, but also with its supply chain constraints.

Morgan Stanley's Tesla report, in which it speaks not only of the Cybertruck, but also updates on the Semi production plans - which Torque News covered yesterday - has six main points and is titled "What Matters for Tesla Here? 6 Key Considerations."

Ford produces about 1,000 trucks per day. "Tesla has not stated its target annual output for Cybertruck production yet. It is currently working on the construction of Gigafactory Texas, where the first Cybertrucks will be built. It may be difficult for some to justify Morgan Stanley’s production estimates for the Cybertruck partly because Giga Texas is also known as Tesla’s Cybertruck Factory," explains Maria Merano from Teslarati.

Some people in Teslarati comment saying this is a very bearish update on Cybertruck. They are appalled and shocked by this conservative update on the Tesla Cybertruck's production targets and expectations.

Others say, they expect virtually nothing this year from Cybertruck and the 2022 to be the ramp-up year and 2023 at 1/2 planned capacity. "I would think 250k that year for TX alone would make sense. If we consider 2025 to be the year it reaches full capacity (not counting other potential factories) 500k would be more realistic," comments a user, named ManuJi.

Tesla, according to some unofficial numbers has hundreds of thousands of reservations of Cybertruck. Some people put the figure between 600,000 and 700,000. And Indeed, why would any company with orders for so many electric trucks on the books take 4 years to deliver 100,000 per year?

I personally expect production rate of 100,000 per year by end of 2022, and ramping higher every year after, given Tesla's experience by then, and provided Tesla will not have supply and battery constraints. Tesla probably will wait until its tabless new battery comes into production.

In the meantime, as Torque News Tesla reporter Daniel Cappo reports Tesla is in full swing actively hiring workers for its Texas Gigafactory, to prepare them for the Model Y and Cybertruck production. In fact, as Torque News Tesla reporter Tinsae Aregay reports, the Giga Texas is going will only cost about 400 million US dollars according to internal documents: much cheaper than Giga Berlin.

Tsingshan's Threat to Tesla: EV Maker Is In Battery Crosshairs
Tesla-Funded Research Reveals One of The Biggest Mysteries of EV Battery
END_OF_DOCUMENT_TOKEN_TO_BE_REPLACED