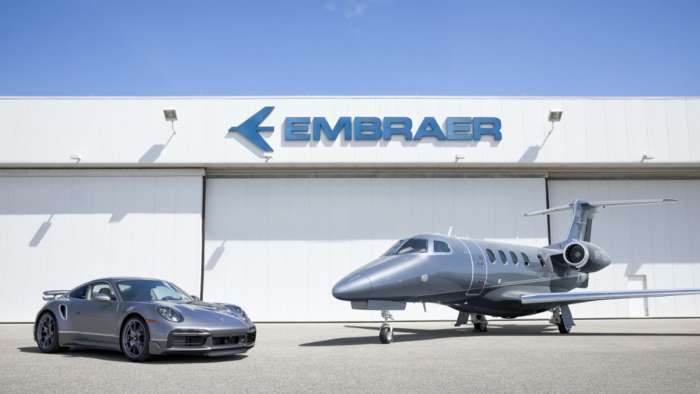 Porsche and jet manufacturer Embraer have come together to present a once in a lifetime “Duet”, matching both air and land performance.
Advertisement

Car manufacturers have been inspired by aviation from the beginning. BMW used to be an airplane manufacturer for their government and Porsche used to coach-build military equipment. The list goes on and on. But not only have car brands evolved from aviation to automotive businesses, but they have also tried to marry the two. Horatio Pagani famously created the interior of his Huarya masterpiece after the instruments and design elements of airplanes which only brought more attention to how spiritually connected they are.

Just 3 days ago, Porsche announced their own aviation-inspired project, but instead of trying to mimic the design of an aircraft, they are giving you both worlds in one exclusive package. This is the Porsche and Embraer “Duet”. 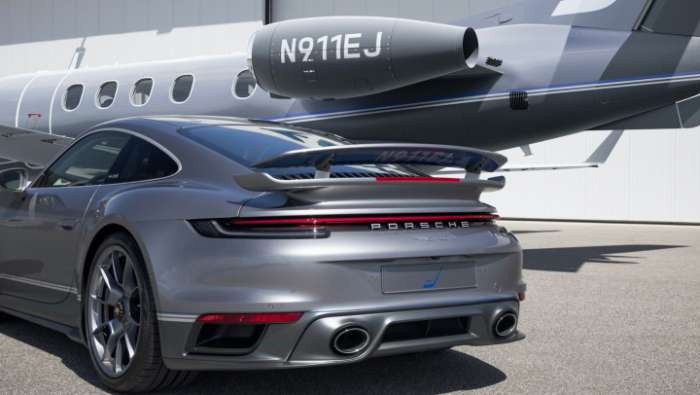 What They Are Offering

For the first time, Porsche and high-end business jet company Embraer have collaborated on a double-package of a lifetime. Porsche offers its current 911 Turbo S and Embraer, their Phenom 300E business jet. For a very special customer, Porsche and Embraer will sell the two machines together with ultra-rare options.

This isn’t just a very expensive option for a 911 Turbo S or a lazy third-hand combo purchase, this is a project that both companies have spent a long time developing. Both the jet and sports car are fitted with options that neither company offers to normal buyers... if you consider buying a jet a “normal thing”. 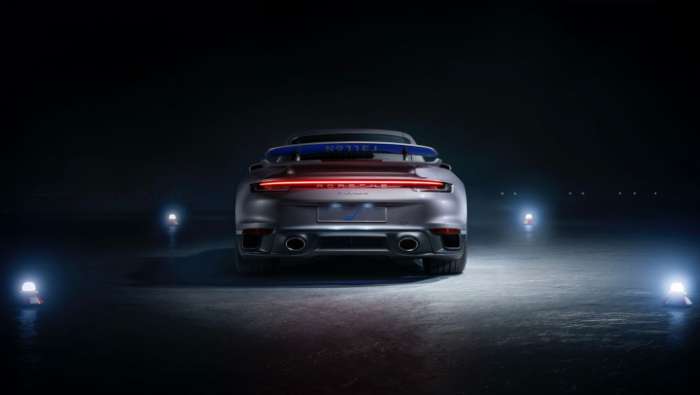 Let’s start with what you see first, the exterior. The two feature a special two-tone paint, Platinum Silver Metallic, and Matte Jet Grey Metallic. The accents of the car and plane have been done in Speed Blue that can be seen on the side of the two machines and everywhere in the interior of the 911.

They also have a special logo from which its inspiration is derived from the wing of the Phenom along with the rear wing of the Turbo S. Speaking of the rear wing; when it automatically raises up at a certain speed it reveals a Speed Blue underbelly with the jet registration number printed all the way across. All of this paint is completed entirely by hand, both on the Phenom and the 911. Talk about a lot of work. 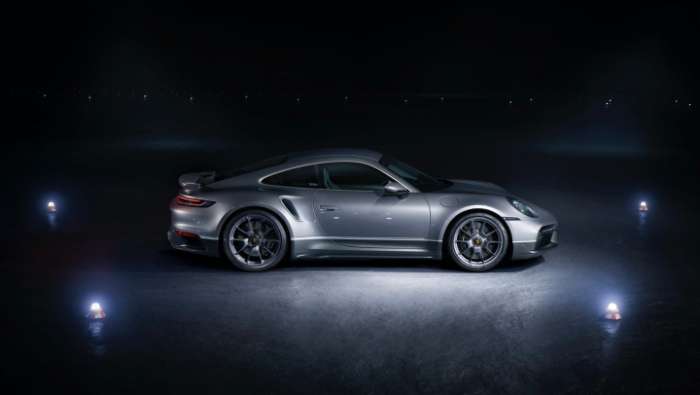 The wheels are an alloy that are painted with the same platinum and blue scheme. Take your eyes upward and you’ll see an unfamiliar badge stamped on the B-pillar, it is the special logo surrounded by 10 small rectangular light fields. The customer can decide which of the ten identical lights they want to be illuminated, as it symbolized the car’s 1 of 10 production number. Once chosen the badge can be duplicated and put on the outside of the customer’s jet. 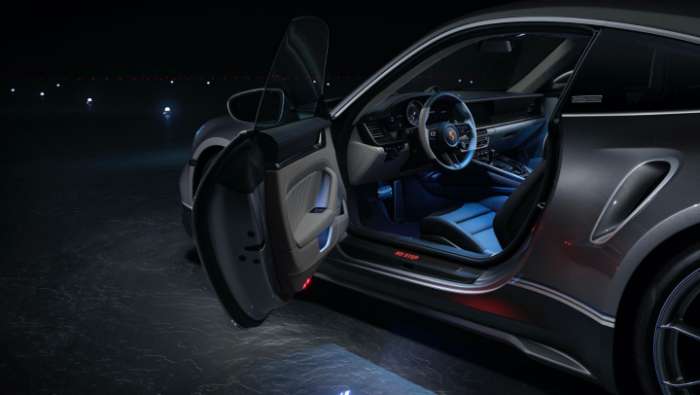 The Porsche has a one-of-a-kind interior that is only available to Duet customers, there is a lot to unpack here so bear with us. The seats are wrapped in both black and chalk leather and hand-sewn together in Speed Blue thread. The interior roof is covered in chalk Alcantara to match the seats along with the floor. Aside from all the rare elements, they also include Porsche’s Carbon interior package which fits the seats with high gloss carbon fiber along with the inner frame of the steering wheel.

They even went so far as to match the leather seat adjusting loop with the one in the jet, both wrapped in a vibrant red leather. The interior also reminds you that you have a rare car. The space right above the glove box has a “one of 10” text that will woo your passengers upon entry. 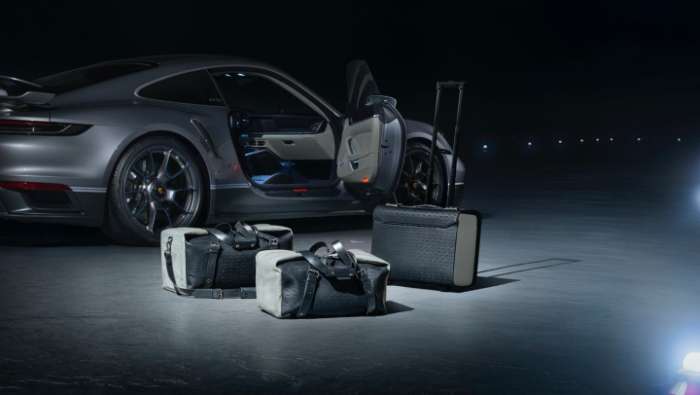 But before letting your friend in your car you’ll have to unlock it with a custom key. The housing for the fob is painted in Speed Blue and also features the big jet registration number on the sides. All of this work is done by Porsche Exclusive Manufaktur, who recently got a big budget increase to make all of Porshe’s high-end products more customizable.

Oh, but it doesn’t stop there. Remember Porsche Design, They’re high-end luggage and clothing branch? Well, they went all-in with this one. You get a specially made 1919 Globetimer UTC watch, or “timepiece” as the wealthy may prefer, that is paint-matched to both of your new toys. You also get a luggage set, including a pilot’s case and two weekend duffle bags that, yet again, match your car and plane. 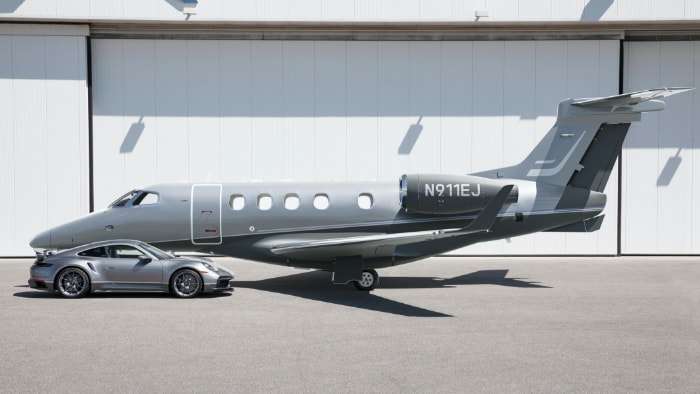 Embraer’s Phenom 300E jet is no slouch in the quality department either, and because we aren’t aviation experts, we will let Porsche’s media team explain. In the press release, they said, “The Phenom 300E is the fastest and longest-ranged single-pilot jet, with a high-speed cruise of 464 knots and a five-occupant range of 3,724 km (2,010 nautical miles) with NBAA IRF reserves. With the best climb and field performance in its class, the Phenom 300E costs less to operate and maintain than its peers. The aircraft is capable of flying at 13,716 metres (45,000 feet), powered by two Pratt & Whitney Canada PW535E1 engines with 3,478 pounds (15.47 kN) of thrust each.”

We can’t know exactly how much this 2021 model year 911 Turbo S will cost because it has so many one-of-a-kind options and expensive goodies, but the jet alone will cost you $10,000,000, enough to make whatever the Porsche costs look puny.