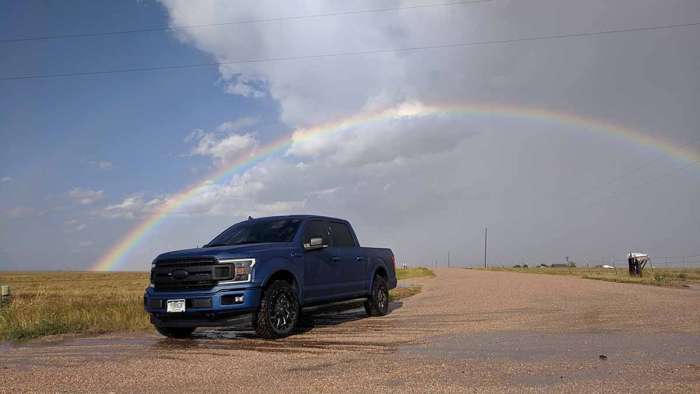 One of my favorite movies is Twister – the somewhat-hokey but still-fun-to-watch action move from 1996 starring Bill Paxton and Helen Hunt. It tells the story of scientists who chase storms, specifically tornadoes.

In the movie, Bill Paxton’s character drives a Ram pickup truck that runs through cornfields and literally gets sucked up by a hellacious funnel cloud. So, it was with great interest when I learned about Matthew Minnillo of Colorado who is an amateur storm chaser. And instead of a Ram pickup he drives a 2018 Ford F-150.

So you know I had to do something on it for Torque News. I interviewed Minnillo about what it was like being a storm chaser and also about his customized 2018 F-150. 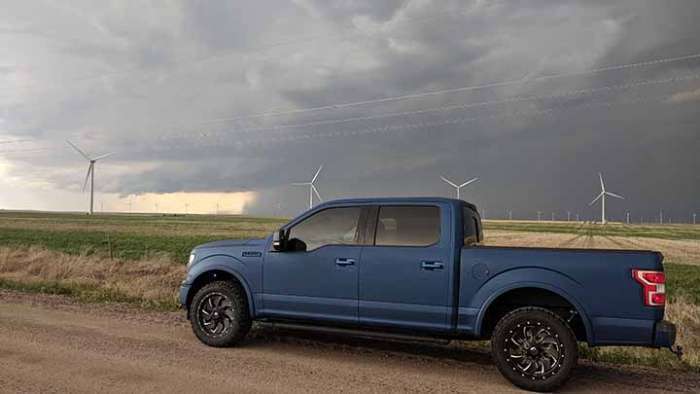 Life of a Storm Chaser – First Start With A Good Truck
Minnillo’s truck of choice is the 2018 Ford F-150 XLT nicknamed Blue Thunder. How apropos for a name.

I recently wrote about bull bars and bumper adjustments for the F-150. Minnillo made numerous modifications to the F-150 in order to make it more durable and to handle the rigors of storm chasing.

“The most attractive modification is the full coverage of spray on bedliner in matching Lightning Blue done by Bullet Liner,” Minnillo said.

“All of the windows are lined with RM Windowtint's windshield rock chip protector on the outside and inside have 30% tint and a safety film,” he said. For the bed of the truck, I have a Bakflip G2 tonneau cover, which helps to protect the air compressor and tank mounted on the back wall for the Hornblasters 244 Nightmare Edition Train Horn Kit.” 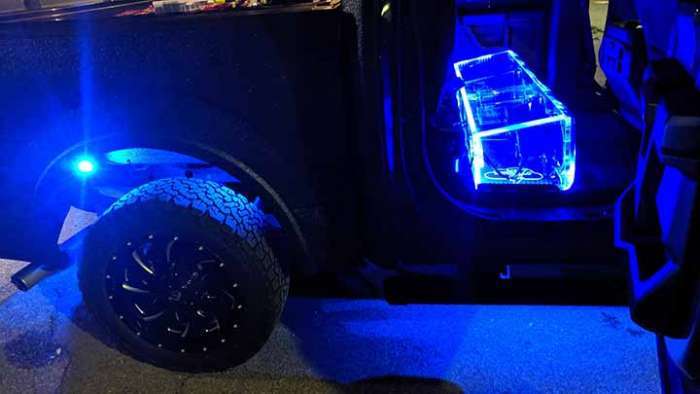 The horns are mounted underneath the front end. Other modifications include the addition of Alpharex Pro series headlights, Morimoto XB taillights and a Recon smoked third brake light.

“Being big into car audio, I upgraded the entire sound system as well. A DD Audio SS4B 4 channel amp powering DB Drive E6 components in the front doors and DB Drive PA speakers in the rear doors. A DD Audio M4b 5,000-watt amp for the four 8" DD Audio supercharged 2508 subwoofers in a Gately Audio full acrylic enclosure underneath the backseat.”

Helping to power all of that is a Singer 280-amp alternator and a Limitless Lithium 45ah battery, plus 100 feet of 0-gauge wire ran throughout the truck. DB Link Lighting Solutions help light up the inside and outside of the whole truck.

“It is hard to find anything else to upgrade, but I think customized leather seats is next on the list,” Minnillo said. “My brother Mike wants to make it faster, so maybe down the line a little engine mod as well.” 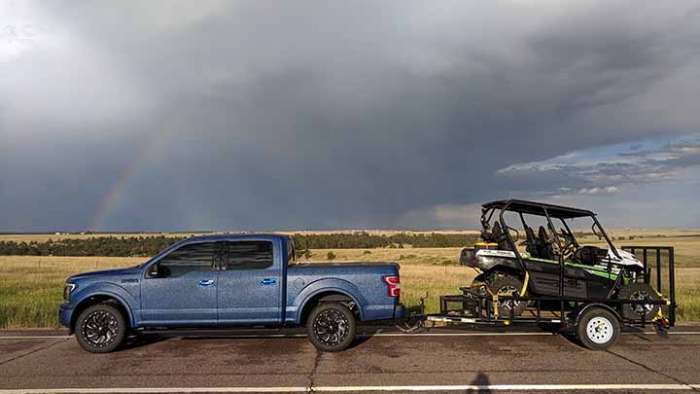 Why Ford and Why An F-150 Instead of a Wrangler or Ram?
I asked Minnillo why he chose an F-150 over another truck, like Paxton’s Ram in the movie Twister or something more off-road rugged like a Jeep Wrangler.
“It’s really more of a personal preference. I had a 2008 F-150 XLT prior to my 2018 and have always loved Ford trucks,” he said.

It seems clear to me that Ford’s mantra of Built Ford tough applies to storm chasing too.

“I like having my truck because 4-wheel drive and good tires definitely helps with muddy dirt roads,” Minnillo said. “I think it comes down to: What vehicle do you want to risk getting damaged? I have seen many chasers in cheap or older vehicles. Not many are as new as mine because who in their right mind would sacrifice a new vehicle to severe hail dents? (This guy LOL).” 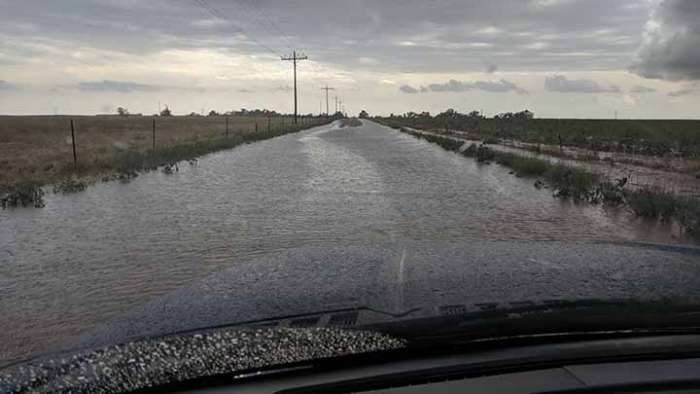 Where’s the Road Rabbit?
Obviously, there’s a lot of suspension of disbelief in the Hollywood film Twister. And for its time the CGI was outstanding. So realizing that some things are exaggerated and outlandish, I asked Minnillo how his storm chasing hobby compared to the movie.

“Storm chasing to me is a fun adrenaline rush. I love being out around storms and admiring the beauty and danger present within them,” he said.

“Some chasers like to stay outside of the storms to photograph and video the storms beauty and progression, and I respect that. I, on the other hand, like to be directly underneath the core of the storm witnessing the heavy rain, hail, and strong winds associated with it, pending there are no tornadoes nearby. As far as being similar to the movie Twister, there is lots of driving, especially on middle of nowhere back roads. I quote "Where's the road, Rabbit?" quite often out there. I have not been in close range to any tornadoes yet, nor have I seen any cows floating by, so I cannot attest to those parts of the movie.”

I wrote recently about Ford’s new GPS partnership that allows you to go off the beaten path, but still maybe not a cornfield.

“Nothing from tornadoes as I didn't see any this year since building the truck. I just drove into the biggest hail of the season on August 5th, where I picked up 2-inch hailstones that had just hammered Blue Thunder,” he said.

“After all of the outside mods, I knew it wasn't a guarantee against damage, so I wanted to find the limitations, and it seems 2-inch hail is it. After that hailstorm, I have a badly dented bed cover, a few minor dents on the hood, a broken plastic wiper cowl, and a cracked windshield.”

I sure hope he has good insurance, or an understanding insurance agent.
“I achieved the first 2 of 3 windshield cracks by driving 50 mph trying to catch up with the storm and hitting the first few hail stones which were about golf ball size.” 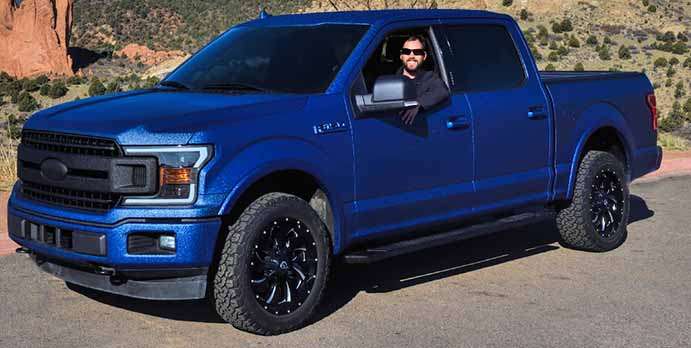 Flying Cows and Close Calls
Minnillo mentioned the 2-inch hail he encountered that battered his truck. The day before that storm, he told me about another close call.

“I was chasing another severe hailstorm. I had to drive pretty fast across very muddy, slightly flooded, and hail covered dirt roads in blinding rain, trying to stay with the storm. I could have slid off the road into a ditch at any moment due to a slight error, but 4-wheel drive, good tires and some skilled driving kept me on the road,” he said.

He continued the story, “by the time I did get just in front of the hail core, I was slammed with strong winds and ping pong ball size hail. Once it passed, I drove forward on a paved highway about a half mile and that is when I saw even bigger hail on the side of the road. I pulled over to gather a few hail stones and they measured 2.5"! That is tennis ball size. So I narrowly avoided really getting slammed by huge hail. And as I found out the next day with the 2" hailstorm, 2.5" would have really put a hurting on Blue Thunder. “

So, does Blue Thunder attract nature’s lighting at all?

“Being underneath storms, there is often close lightning strikes. I have videos from my dashcam of several lightning strikes hitting within 100 yards of me, instant flash then boom! Those are frightening because you don't see lightning coming. “

I do love a good storm. I’m not saying I’m going to chase storms, but I admire what Matt has done and Blue Thunder sure is a beautiful truck and seems to indeed be Built Ford Tough. Thank you to Matt for sharing your storm chasing story and providing me photos of your beautiful and tough F-150.

If you've got an interesting truck story let me know. Leave me a comment below and maybe I'll write up a story on your special truck.

Tesla-Funded Research Reveals One of The Biggest Mysteries of EV Battery
Tesla Tesla Buyer Nets a Whopping $12,000 Discount After Asking for Reduction
END_OF_DOCUMENT_TOKEN_TO_BE_REPLACED