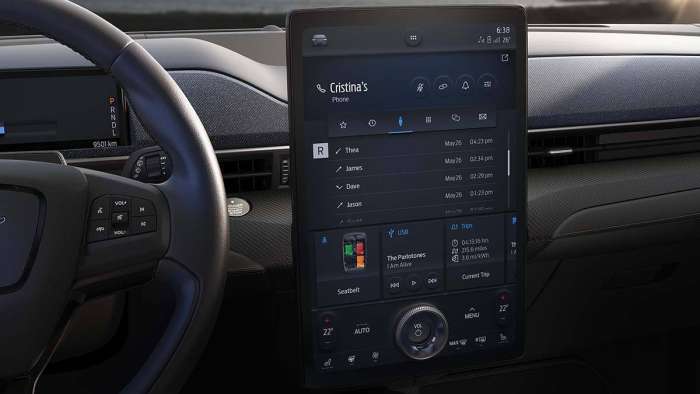 As Ford pushes toward a high-technology future, the need to better organize all that information and visually present in a safe, efficient way is always a challenge. Ford now has the largest infotainment screens in the industry (outside of Tesla) as it prepares to launch Sync 4.
Advertisement

I review a lot of different vehicles each year. And I always write about the intuitive nature of each vehicle’s infotainment systems. Some are intuitive, some are outdated, and some are over engineered. One thing they all have in common now is some form of touchscreen interface. We can partially thank Apple for that, since the iPad was introduced, and tablets became a thing. Now, many vehicles have tablets centered right smack in the middle of the dashboard. From smaller six-inch screens to screens that exceed 10 inches, today’s vehicles have a lot of technology to present.

Ford leads way now, especially as they are set to introduce the fourth iteration of their infotainment system Sync. When it first launched, Sync was pretty revolutionary, and then the industry caught up to them and even surpassed them. Sync 2 was widely criticized for failures in their voice commands. Since improving upon it, I’ve ranked Sync 3 near the top of my favorite infotainment interfaces. It’s intuitive and presents cleanly.

But, do we really need a 10-15-inch touchscreen to run it all? Some readers have noted how distracting they find these screens. I think I’m on the other side of the argument. The size doesn’t matter as long as it’s well organized and doesn’t block the line of vision or have an angle that allows for sun glare. There are so many nuances involved with these touchscreens that it’s not just about the size, but about the placement and how it flows as an integral part of a vehicle’s interior.

I recently drove a Ford Explorer ST that had a 10-inch screen that ran Ford’s Sync 3. I enjoyed pairing up my iPhone to it and watched my playlists flow perfectly onto the screen, while still being able to navigate around with the map present. I found it to be quite intuitive and I didn’t find the screen to overwhelm the interior or be a distraction for me as the driver.

Mustang Mach-E Has a 15.5-Inch Touchscreen
Just last week, I was able to get inside the Mustang Mach-E and saw a 15.5-inch touchscreen that encompassed a good part of the interior of this electrified crossover. 15.5 inches is bigger than iPad, by the way. Ford has said they will introduce the Sync 4 system on many vehicles starting in the 2020 model year, and the Mach-E will have this new system. This large screen looks eerily similar to that found in many Teslas, and that's certainly who Ford sees as the competitor for the Mach-E.

What Does Ford’s Sync 4 System Offer?
According to Ford, the bigger screens are necessary and serve a purpose as it relates to some of the features of the Sync 4 system. On all-new available 12-inch screens, multi-tasking will be enabled by splitting the screen into larger and smaller windows. For example, if a customer wants to keep their navigation route on the screen while changing songs, they can choose to display the radio or other streaming music services in the smaller display area.

Meanwhile, with large 15.5-inch screens, SYNC 4 features the addition of Adaptive Dash Cards, according to Ford. Instead of having to navigate menus every time you want to launch an app, recently used or popular features are listed horizontally underneath the main portion of the screen in individual dash cards. These cards display helpful information such as the next step on your route, but they are interactive as well. You can pause or skip songs directly through the card instead of having to bring up your music player, and similarly you can view your phone status or hang up calls through the card as well.

“No matter what size screen Ford customers choose, they will be getting an experience tailor-made for their vehicle,” said Gary Jablonski, chief engineer for SYNC technology, Ford Motor Company. “SYNC 4 puts these high-definition screens to work not only by offering even crisper displays, but also by making driving easier with new multi-tasking capabilities.”

Ford's SYNC 4 Modeled After Tesla’s Screen
Similar to Tesla, the new technology featured on these screens and in the Ford Sync 4 system include over-the-air updates and system downloads. This will mean fewer trips to the car dealer as well, and that’s always a good thing.

“SYNC has always featured the best of Ford innovation to help our customers stay connected to and manage their busy lives as they move about the world,” said Hau Thai-Tang, Ford chief product development & purchasing officer. “With this new fourth-generation technology, we’ve evolved SYNC into an intelligent, voice-activated, in-vehicle digital assistant.” 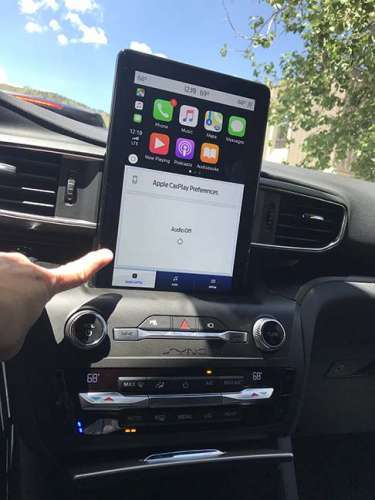 My colleague Mary Conway wrote about some more neat technology found inside the 2020 Ford Explorer. Here's what she wrote.

So do today’s infotainment touchscreens need to be so big? Well, technically no. But, as someone who loves as much (intuitive) technology as possible in today’s vehicles, I don’t mind the bigger screens. As long as the system is easy to use, aesthetically pleasing, driver-focused and still has some knobs and buttons, rather than all haptic touch commands, the size doesn’t matter so much for me.

Timothy Parker wrote on February 11, 2020 - 3:49pm Permalink
Although I prefer the interior of the Mach-E to that of the Model 3, I find the huge tablet displays to constitute a poorly-integrated, intrusive afterthought that diminishes instead of enhances. They need to trim it down and incorporate it as a component of the dash rather than something that looks like it is attached with bubble gum and duct tape. Add voice commands if necessary to simplify interactions, but a huge screen like this dominating the interior is nothing but a symptom of our overly screen-dominated lives. This is not a step in the right direction. I will always put such vehicles at the low end of my preference list.
Cj wrote on April 6, 2020 - 10:22pm Permalink
Wil current sync 3 be able to update to sync4. Or will sync 4 15 inch screen be able to fit inside 2018 f150 plat
Jimmy Dinsmore wrote on April 7, 2020 - 11:33am Permalink
I honestly don't know if it can be retrofitted. My guess is probably not, but I can't say for sure.