New information indicates range nearing 500 miles for F-150 Lightning, without load. Ford could be on the verge of increasing range of EV F-150 as they announce Ford Ion Park, a new global battery center. Ion Park is Ford’s equivalent to Tesla’s Gigafactory. Range extending-technology at the forefront of innovative Ion Park.
Advertisement

If reports from the highly reputable InsideEVs.com are true then Ford may be under promising and over delivering when it comes to range on the new all-electric F-150 Lighting. And that’s a good practice. Ford has held tight to their 300-mile range estimate when they’ve talked up the 2022 F-150 Lighting.

After the launch, I was critical of this range as being not enough, especially when you factor in how most people will use a truck (towing and/or payload). That 300-mile plateau seems far too low and not real-world practical for the average truck owner.

However, a respectable YouTuber and also a reporter from InsideEVs.com both recorded range estimates nearing 500 miles during brief times with the F-150 Lightning. In the full story here, reporter Tom Moloughney took a fairly innocuous photo of the screen of the F-150 Lightning where he capture a nearly fully-charged Lighting showing a range of 472 miles. See image below, courtesy of InsideEVs. 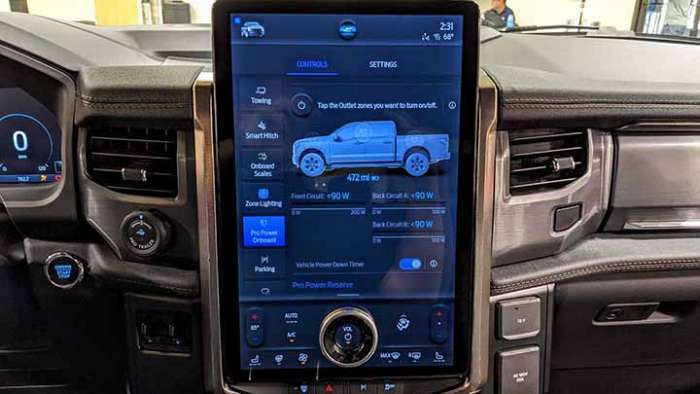 When he asked Darren Palmer, Ford's Global General Manager Of Battery Electric Vehicles about the image, he deflected the question. But Palmer did point out that Ford’s range estimation software on the F-150 Lighting would be highly accurate factoring in payload, towing and tongue weight.

Palmer told Moloughney that the range estimator would be accurate within 5% essentially meaning that an F-150 Lighting, without any load could approach 500 miles of range.

YouTuber Marques Brownlee said on one of his videos that a spokesperson from Ford indicated the 300-mile range is with 1,000 payload. So two different reputable sources seem to show that the F-150 Lightning’s range might be much better than the 300-mile level Ford touted. I certainly hope that’s the case.

Related story: If Cybertruck is a bust, Ford should double down on F-150 Lightning. 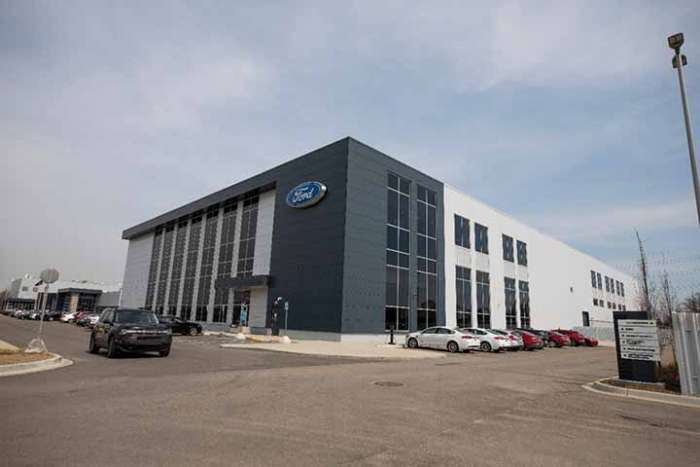 Ford Ion Park Hub of Battery Technology
Today, Ford announced that Romulus, Michigan would be the home of the Ford Ion Park, which will serve as Ford’s global battery center of excellence. The research and development that will take place at Ion Park, which is similar to Tesla’s Gigafactory, will advance battery cell technology.

“Ford already is delivering on our plan to lead the electric revolution with strong new vehicles including Mustang Mach-E, 2022 E-Transit available late 2021 and the 2022 F-150 Lightning available from spring next year,” said Anand Sankaran, Ford Ion Park director. “The new lab will help Ford speed up the battery development process to deliver even more capable, affordable batteries and is part of Ford’s renewed commitment to making Michigan a centerpiece of its focus on EVs.”

Ford Ion Park represents $100 million of Ford’s $185 million investment in developing, testing, and building vehicle battery cells and cell arrays. It is part of the company’s $30 billion investment in electrification by 2025 and a renewed commitment to making Michigan a centerpiece of its focus on EVs.

“Ford’s investment in battery research and development in Romulus will support hundreds of good-paying jobs, attract innovative talent to Michigan, and help us continue leading the world in advanced mobility and manufacturing,” said Governor Gretchen Whitmer. “Ford is an American icon that has left its mark on the world over a century, and with the research that will take place at Ford Ion Park, they will shape the next century while reducing emissions and accelerating electrification.”

“We are thankful for the support of the MEDC and the Michigan Strategic Fund in helping establish Ford Ion Park in Romulus,” said Sankaran. 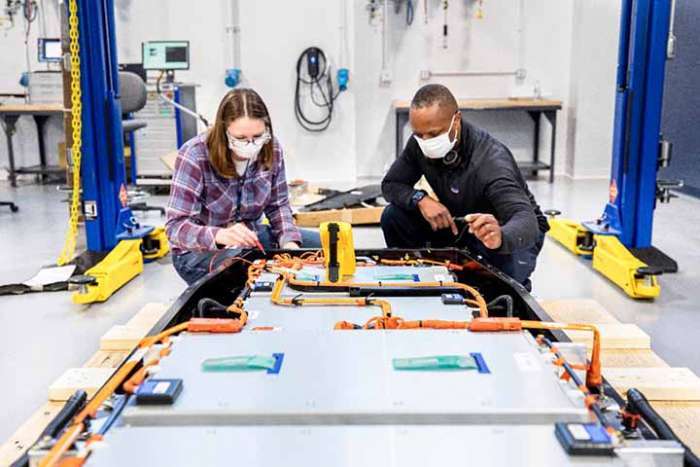 Battery Technology Could Lead To Advanced Range of Ford’s EVs
Assuming what we heard is true, that the F-150 Lightning might exceed its range expectations, that’s a good thing.

But at the Ion Park, Ford’s team will advance battery technology in general to improve range for their long-term electrification plans.

Part of a $185 million investment, Ford Ion Park will help develop and manufacture lithium ion and solid-state battery cells and arrays to accelerate our electrification efforts. The lab will use state-of-the-art technology to pilot new manufacturing techniques that will allow Ford to research and quickly scale breakthrough battery cell designs with novel materials as part of its plan to vertically integrates battery cells and batteries.

From mines to recycling, the Ford Ion Park team is working with experts across the company, including experts at Ford’s previously announced Battery Benchmarking and Test Laboratory, Ford Customer Service Division, plus key suppliers and partners.

As I’ve driven several pure EVs this year, I’ve quickly learned that range anxiety is not much of an issue. The average consumer will think it is a factor. But drive an EV and you’ll quickly have your mind set at ease.
That being said, more range and better battery technology, especially in the area of solid-state batteries is much needed. So only good things can come from Ford Ion Park. And the fact that it’s based in the U.S. with American jobs is a win for Ford too.

Related story: How Ford F-150 Lightning contributes to the city of tomorrow.

As always, you get the final word. What do you think about the range of the F-150 Lightning and battery range in general for EVs? Leave me your comments below.