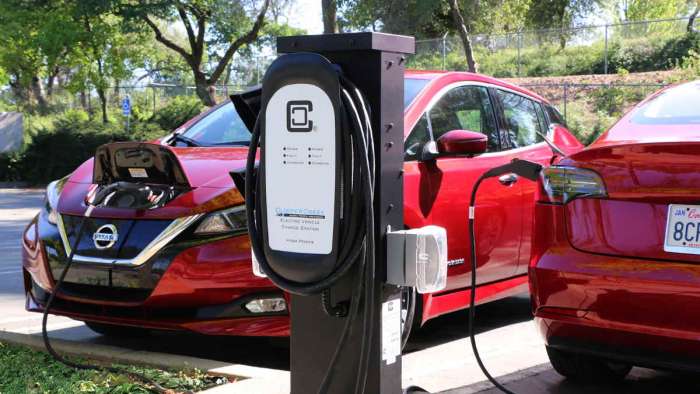 Electric car sales grew 46 percent worldwide in 2018, amid a slump in overall vehicle sales. But what hasn’t been as well publicized is where all those new electric cars are going to charge.

As options for public fast-charging have begun expanding, so has the selection of so-called Level 2 home chargers, which can deliver more than 100 miles in an overnight charge.

We recently had an opportunity to look into the latest trends in home chargers and found them worth sharing here.

As always, chargers are getting faster, more capable, and cheaper. And new electric cars come on the market with bigger batteries and longer ranges, it will be important to have faster chargers to supply them with enough energy in an overnight charge to meet their owners’ expectations.

Lower costs and more flexibility have attracted many more players into the market for fast chargers. When the Nissan Leaf and Chevrolet Volt were first introduced in 2011, most buyers purchased chargers through the automakers. There were only three main suppliers: Aerovironment, a military contractor which kept its hand in improving chargers since a wave of electric cars hit the streets in the 1970s and was sold through Nissan dealerships; European supplier Bosch, which made smaller, slower more basic chargers for General Motors for the Chevrolet Volt; and Clipper Creek, another supplier from the 1970s which had stayed afloat building power pedestals for RV parks.

Now a new wave of chargers has emerged, often from China, as well as a handful of new units from some of the big companies that build fast-charging stations for electric cars besides Teslas: ChargePoint and Electrify America, as well as a host of startups.

These home chargers that run on 240-volt electricity are known as Level 2 chargers. (Level 1 chargers have been mainly portable cords that run on 110 volts and can take days to charge the big batteries in the latest electric cars. Level 3 chargers are the public fast chargers, such as Tesla Superchargers, that can charge even long-range electric cars in about a half-hour, but need specialized power connections and can cost tens of thousands of dollars to install. It’s not realistic for most people to install them at home for the same reason most people don’t build gas stations in their garages.)

The biggest change in the market for home chargers is an explosion of affordable portable charge cords that operate at 240 volts. These chargers cost as little as $180 and come from a wide variety of suppliers, mostly from China. They come under brands such as AmazingE (a division of Clipper Creek), Bouge RV, Couplago, Duosida, Morec, and Mustart. Most deliver 12 or 16 amps at 240 volts, which would take 16 to 20 hours to charge the 258-mile, 62-kWh battery in a new Hyundai Kona Electric. In fact, see how Electrify America is handling Kia Niro EV, Hyundai Kona Electric, and other charging issues.

Some buyers are buying them as extra cords to carry with them while they leave their original 110-volt charge cords at home. Some cost much less than buying a second cord from an automaker. Other buyers may use these portable aftermarket cords to plug into a clothes-dryer outlet at home as their primary means of charging their cars. Many of these cords also come with 110-volt adapters to plug into standard household outlets when a 240-volt plug isn’t available.

Not a lot has changed in more mainstream chargers that operate up to 32 amps (enough to charge a Kona Electric in about 8 hours.) Electrify America, though, the large fast-charging network being built with funds from Volkswagen’s diesel emissions settlement, now offers a 32 amp home charger for $450. A couple of Chinese brands, Lefanev and Morec, also offer lower-cost units for a little over $300. Like higher-powered chargers, these can be either hard-wired or plugged into a wall outlet for a few extra dollars.

Many of these original charging station suppliers have moved up-market, building faster chargers for the longer-range cars coming out today. At this point, the fastest chargers (other than Teslas) develop 40 amps at 240 volts. That’s enough to charge a Hyundai Kona Electric’s 62-kWh battery pack in a little over seven hours. The Kona Electric is rated at 258 miles of range.

Fast Chargers Are Getting Smarter

These fast chargers are also getting smarter. The ChargePoint Homeflex, for example, delivers an even faster 50 amps and uses software to communicate with a homeowner’s electric company and only charge when rates are lowest and to slow down charging when possible to avoid grid blackouts and still leave the driver with a full charge before they need to leave.

All the chargers at this level are internet enabled and can communicate with cell-phone apps that can control and monitor them. If the charge quits in because of a power outage, for example, or because a creature bumped the connector the wrong way, the owner gets notified on his or her cell phone.

Clipper Creek recently introduced a new 40-amp charger that can charge two electric cars, albeit only at 20 amps each if they’re plugged in and charging at the same time. The HCS-D40P Dual Charging Station costs $1,369.

Many of these chargers have to be hard-wired, so they have to be installed by a professional electrician which adds additional cost. Some are available with plugs that can plug into a special 240-volt outlet. You may still have to have such an outlet installed but at least it makes it easier to upgrade the charger or move it to a new home.
Bear in mind that to operate these fast home chargers, you need a dedicated electrical circuit with at least 10 amps more power than the charger’s rating.

Electric car experts have long calculated that 80 percent of electric-car charging will be done at home. A new study by research firm Escalent has found that 85 percent of all new-car buyers are homeowners, solidifying the need for a more robust market for home chargers. Electric-car buyers and those who hope to be can take heart that the market for home charging is becoming more flexible and capable.

Eric Evarts has been bringing topical insight to readers on energy, the environment, technology, transportation, business, and consumer affairs for 25 years. He has spent most of that time in bustling newsrooms at The Christian Science Monitor and Consumer Reports, but his articles have appeared widely at outlets such as the journal Nature Outlook, Cars.com, US News & World Report, AAA, and TheWirecutter.com and Alternet. He can tell readers how to get the best deal and avoid buying a lemon, whether it’s a used car or a bad mortgage. Along the way, he has driven more than 1,500 new cars of all types, but the most interesting ones are those that promise to reduce national dependence on oil, and those that improve the environment. At least compared to some old jalopy they might replace. Please, follow Evarts on Twitter, Facebook and Linkedin

DeanMcManis wrote on March 14, 2020 - 3:14pm Permalink
Thanks for the thorough article Eric. I had a level 2 charger installed at my home 7 years ago and it is great. It cuts my charging time in half compared to the standard 110V plug in charger. One point is that is not always clear to the consumer is that the charger plug or unit is not actually a charger. It passes the AC power to the vehicle's on-board charger where it is converted to DC power to charge the vehicle's battery. The charging cable is called EVSE (electric vehicle supply equipment) and your car's onboard charger and computer tells the EVSE how much power that it can take. My Chevy Volt and Cadillac ELR were limited to 3.6 kW charging regardless of the EVSE's amperage capabilities. But that still allows me to recharge my 40-45 miles of EV range in about 3.5 hours, and I can set the charging time to 12AM-7AM to get the lowest charging rates. My neighbor had to petition the local power company to allow a 60amp service to charge his Tesla Model S more quickly. Many people have a 20/40amp 240V plug already in their garage for the clothes dryer, and you can buy an inexpensive plug in, level 2, EVSE today that can charge relatively quickly a home. BEVs are getting bigger batteries, so even with a level 2 charger and high amperage EVSE it could require overnight charging to refill the battery. But most people drive less than 40 miles a day and recharge their battery every night or every other night because it is convenient to just plug it in when you get home and have it automatically charge up to full while you are sleeping.
Gleb Nikiforov wrote on March 14, 2020 - 9:41pm Permalink
What about Grizzl-E? You did not mention 40 A Grizzl-E by United Chargers from Canada at price below $400
Electrical Serv... wrote on September 16, 2020 - 4:48am Permalink
You will get to know about the charge it more affordable and powerful options arrive charge electric cars This article is very helpful and interesting. I enjoyed reading this article as it provided me lots of information regarding it. You will get best review over here and would suggest others too. Great blog indeed, will visit again future to read more!!
Residential Ele... wrote on November 2, 2020 - 9:06pm Permalink
Here we get to know about the charge it more affordable and powerful options arrive charge electric cars are discussed in detail. It helps us to decide that which one is best among its types. I enjoyed reading this article and would suggest others it as well. Thank you for this article! This is really very informative for us.
Christmas lights nz wrote on November 30, 2020 - 6:09am Permalink
Thank you very much for sharing about charge it more affordable and powerful options arrive charge electric cars here. I really hope I can work on your tips and it works for me too, I am happy to come across your article. Great post I must admit, keep sharing more…
Heat Pumps Porirua wrote on December 18, 2020 - 12:28am Permalink
This is really appreciated that you have presented this data over here charge it more affordable and powerful options arrive charge electric cars, I love all the information shared. It will be very helpful to understand the 2020 home decor trends. Great post to share!!