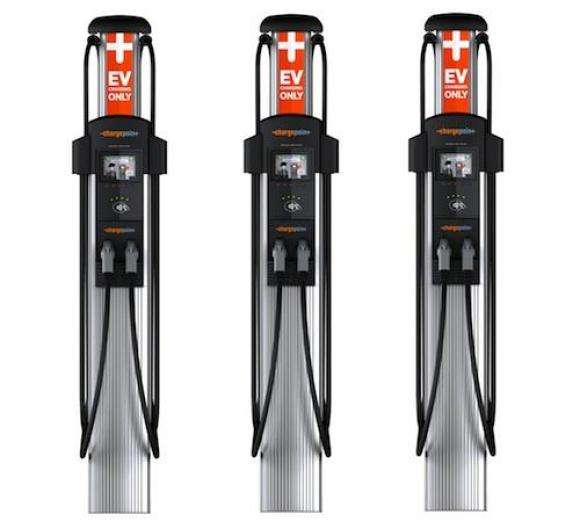 According to data from the Electric Drive Transportation Association, electric car sales have jumped by 40% in the first half of 2013 over 2012. That's almost certainly due to introduction of the Tesla Model S, and the 2013 Nissan Leaf. But the more important factor is this represents the growth in electric car ownership, and the necessity for building out charging infrastructure.

“The electric vehicle market is accelerating at an incredible rate and electric vehicle infrastructure needs to not only pace that growth, but stay ahead of it,” said Pat Romano, President and CEO for ChargePoint. “The CT4000 Series changes the equation by offering more charging ports at every station while dramatically cutting installation costs. The CT4000 is truly a customer-centric EV charging station. Its creation is the result of understanding the needs of both drivers and station owners alike.”

Another first, for ChargePoint stations, is that the CT4000 has self-retracting power cords eliminating some of the mess at charging sites when power cords get criss-crossed.

It has a color LCD screen that can display video delivered wirelessly through ChargePoint's cloud network. Station owners can choose the video to show, and there is a highly informative instructional video available from ChargePoint.

The result should be an even more rapid expansion of the electric car charging networks.