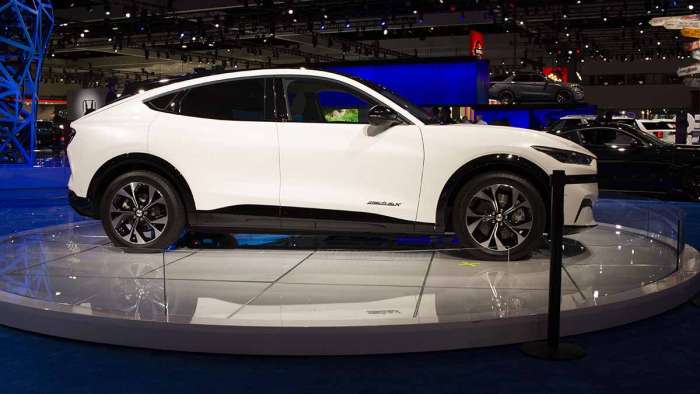 Take a tour with me around the 2019 LA Auto Show while I point out some of the electric vehicle highlights and standouts.
Advertisement

The 2019 LA Auto Show is about to open its doors to the public, showcasing the latest and greatest from automakers around the world. My primary focus is electric vehicles, and though internal combustion cars still dominate the displays, most automakers now have at least one electric or plug-in vehicle to show.
In this story, I will share some of the electric vehicle highlights from the LA Auto Show, so if you have a chance to go, I encourage you to check them out. If not, hopefully my quick overviews give you an idea of what to look forward to. These are exciting times for electrification!

Bollinger B1 and B2
I finally got the chance to speak directly with Robert Bollinger, CEO of Bollinger Motors. Bollinger’s display was in the same location it’s always been at the LA Auto Show (right in front of the South Hall entrance), but this time, they had both the B1 and B2 trucks on display. 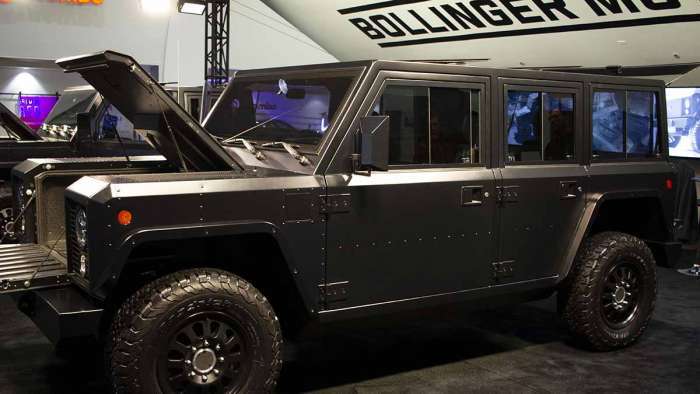 I had wait for Robert to finish a couple of interviews, but when he started to wipe down and clean the display trucks (yes, a CEO getting his hands dirty), I knew it was my chance speak with him about pricing, production, and competitors.

Previously, I had tried to predict the Bollinger B1 and B2’s cost, but I had been way off. Rather than getting the price down to about $60,000, these trucks are starting at $125,000. It turns out that I was right about some of Bollinger’s efforts at cost cutting, but it simply wasn’t enough to compensate for battery costs. According to Bollinger, it’s simply not possible at this point to sell an electric truck with a 120 kWh battery for $75,000 and still make a profit.

The good news is, Bollinger confirmed that they are almost sold out for their first year’s production, which will be limited to a few thousand trucks. As I inspected the trucks more closely, it was clear to see all of the handcrafted features, ranging from bent body panels to real wood liners and inside door handles. 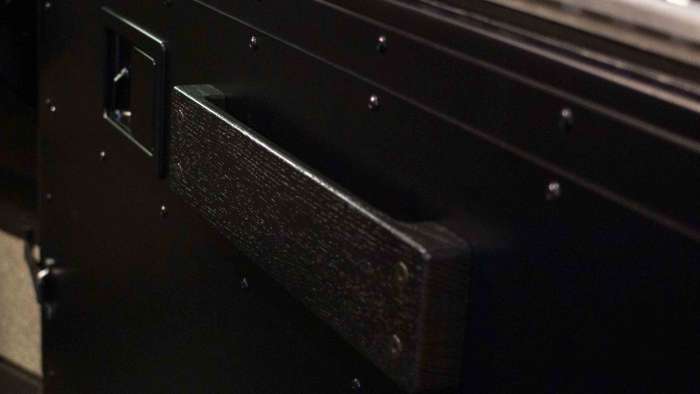 At this point, buying a Bollinger B1 or B2 is like having a custom shop build you a vehicle, so it makes sense that they have to charge custom-shop rates. Overall, I’m still as excited about the B1 as I was when I first saw it on display at the LA Auto Show three years ago, but as I told Robert, this poor journalist will have to watch from the sidelines for a while longer.

Mercedes EQC
I the Mercedes EQC is flying under the radar a bit – it’s being outshined by some of the more publicized electric vehicles – but I don’t feel like that should be the case. In my opinion, it is one of the most compelling electrics to come out in the last year or so. After sitting in it, I can testify to Mercedes’s quality and craftsmanship, all of which found their way into the EQC. 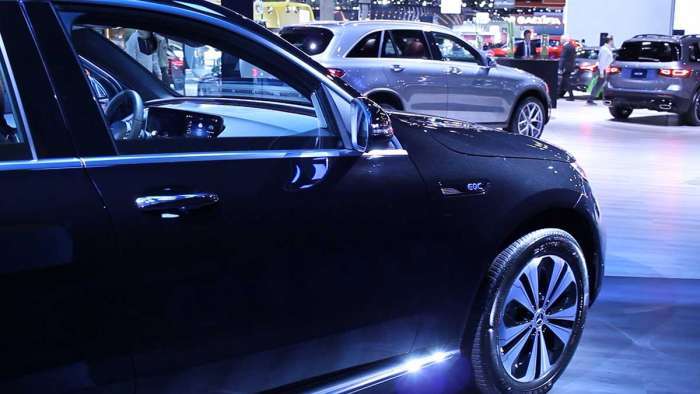 This all-electric, luxury SUV is diving right into the fray with everything from the Audi e-tron and Jaguar I-PACE to the upcoming Ford Mustang Mach-E and Tesla Model Y; however, in my opinion, the EQC might be the best executed of them all.

The Mercedes EQC comes standard with all-wheel drive, 402 horsepower, 561 lb-ft of torque, and a completely decked out interior. What is more, Mercedes took the time to set up a seamless payment structure for public charging as well as providing the EQC with one of the most consistent and comfortable charging rates on the market. Of all of the electric vehicles currently available, it might be the best touring car.

My biggest issue with the EQC at this point is that it’s not available in the United States, so I made sure to ask Mercedes when and where. According to a representative, Mercedes is targeting the first half of 2020 for U.S. deliveries, and they plan a nationwide rollout. They didn’t provide exact numbers, but they did say that a majority of their Mercedes dealerships in the United States opted in for being electric vehicle ready. That means they will be able to both sell and service the EQC and Mercedes’s other upcoming electric vehicles.

The biggest takeaway, though, was that customers who are interested in the EQC can contact their Mercedes dealership today to set up a reservation.

Ford Mustang Mach-E
Ford also had their Mustang Mach-E on full display. Torque News has covered the Mach-E in detail in previous stories, but at a basic level, it is a crossover addition to Ford’s iconic Mustang family. The Mach-E comes in a number of configurations, enabling the customer to choose between rear-wheel and all-wheel drive as well as two battery pack options (the largest of which provides 300 miles of driving range in rear-wheel drive configurations). 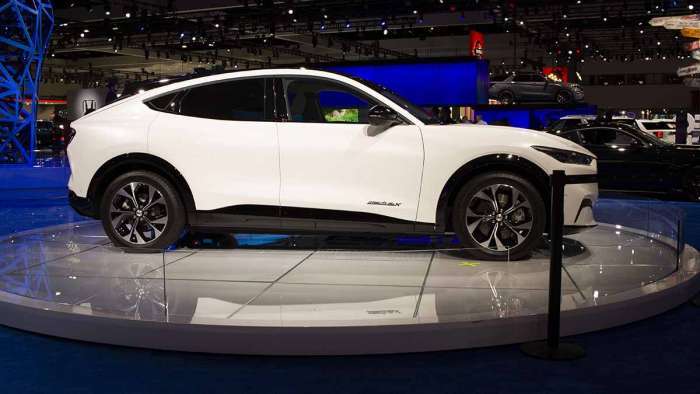 The big takeaway here is that Ford is serious about selling the Mach-E. After the recent live stream event where they unveiled the Mach-E, Ford started accepting refundable $500 deposits, and they carried that over to their display at the LA Auto Show. Not only is the Mach-E one of Ford’s most prominent displays, they also provided a kiosk with ordering information. A number of Mach-E options are laid out, including all of the paint options, while the blue Mustang Mach-E GT quietly sits in the background. 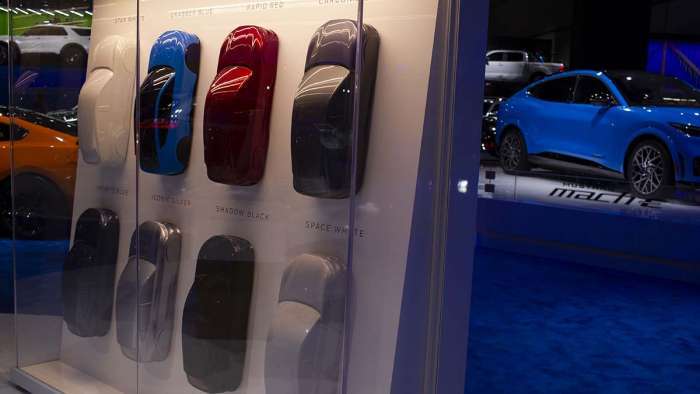 After speaking with a representative, Ford is well aware of the variety of customer needs, so they wanted to provide options with the Mach-E that would appeal to people from across the country. When I asked why they chose the Mustang brand, their response was that, for electric vehicles, performance sells.

Ford did mention that they haven’t announced any immediate plans for selling the Mustang Mach-E in Europe yet, but it definitely sounds like something Ford is considering.

KIA Soul EV
Initially, I was a bit disappointed with KIA. I walked through their auto display, and I couldn’t find a single electric vehicle. It was only later when I realized that KIA actually separated their vehicles into two displays. Essentially, they displayed their internal combustion cars in one area and their plug-in vehicles in a completely different area. 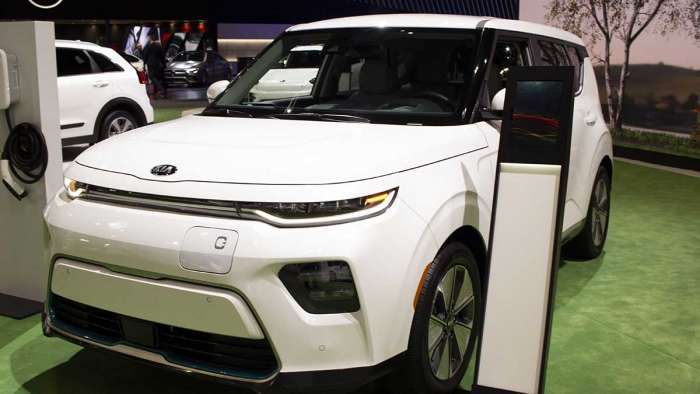 One of the most anticipated upcoming electrics is the KIA Soul EV, and for good reason. It is affordable, utilitarian, and just funky enough for hip-hopping hamsters. The 2020 Soul EV was preceded by a KIA Niro EV (a vehicle that I was able to test and review in depth), and this all-new Soul EV will have very similar underpinnings. 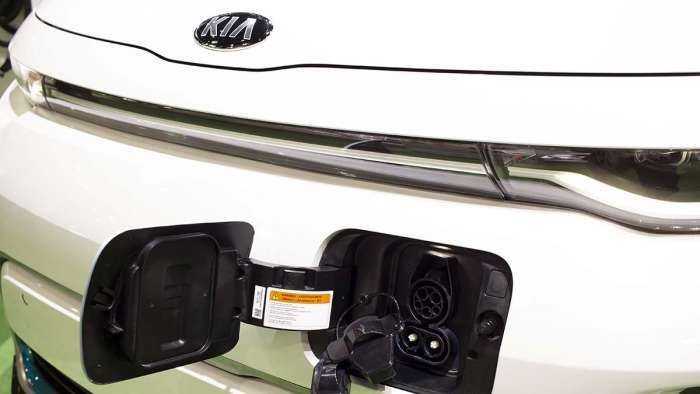 The new Kia Soul EV has 243 miles of EPA range per charge, and rather than the CHAdeMO DC fast charging port that was included with the original Soul EV, the 2020 Soul EV will be equipped with a CCS DC charging port. This is an important update because not only are CCS chargers being built out at a faster rate than CHAdeMO chargers but they are also now the fastest charging standard available. 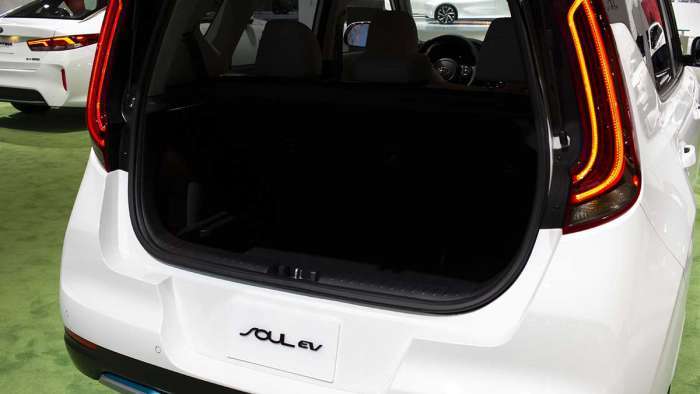 The Soul EV is still very similar to the Niro EV in terms of its powertrain, features, functions, and interior; however, it also has a different body configuration. Based on my initial inspection of the Soul EV, it does address one of my biggest issues with the Niro EV, which was limited vertical cargo space. The cargo area of the Soul EV is significantly larger than the Niro EV’s with better vertical clearance. 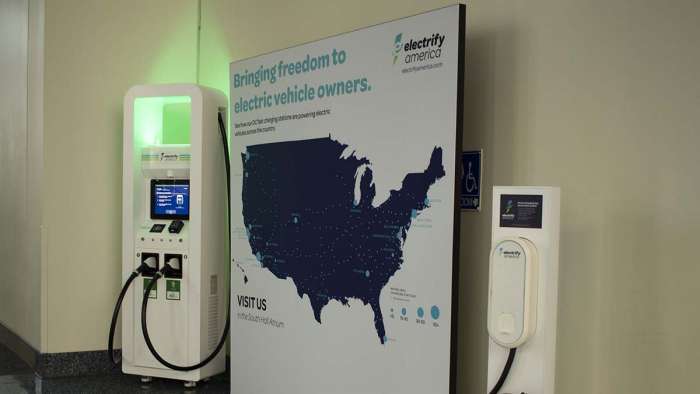 This is in keeping with Electrify America’s strategies for outreach and promoting electric vehicles because one of the main questions the public still has about electric vehicles is where they can recharge while traveling. The staff was there to answer questions about charging and dispel myths and misconceptions. For instance, one representative explained that only one charging head on the charger can be used at a time.

When speaking to one of the representatives, I did bring up some concerns I had about the Electrify America network. In particular, I wanted to know how they were addressing the pricing difference for certain electric vehicles. I noted that if I were to take a long trip in a Hyundai Kona Electric using the Electrify America network, it would literally cost me twice as much as making the same trip in my Chevy Bolt EV. According to the representative, they are working with automakers to correct these issues, but it appears to be something the automaker needs to correct with the vehicle’s software. Tesla wasn’t present at the LA Auto Show; however, their live stream unveiling of their new “Cybertruck” went up right after I had returned. It was an interesting presentation, to say the least, and it included a futuristic cyberpunk theme with a few gaffes along the way (I don’t think insurance is going to cover those broken windows, Elon). I have some serious concerns with what Tesla is trying to promote as a “truck,” and I might dive deeper into those in a future story. At a basic level, Elon emphasized that Tesla was moving away from the old, modular design of trucks in order for a new, unibody design. As a truck guy, my problem with that is that modularity is part of what makes a truck, a truck. People who actually use their trucks for work typically customize them for the task at hand, and a modular platform allows that while a unibody platform does not. So with the Cybertruck, it is essentially a take it or leave it proposition.

That being said, Tesla did announce a very aggressive starting price of $39,900 before incentives, which is good. Tesla claims that version will have 250 miles of range with 250 kW charging capability, so it’s more than likely equipped with a similar 75 kWh battery to what the Model 3 is using. You can order one now, but I’d still wait for some more detailed specifications.