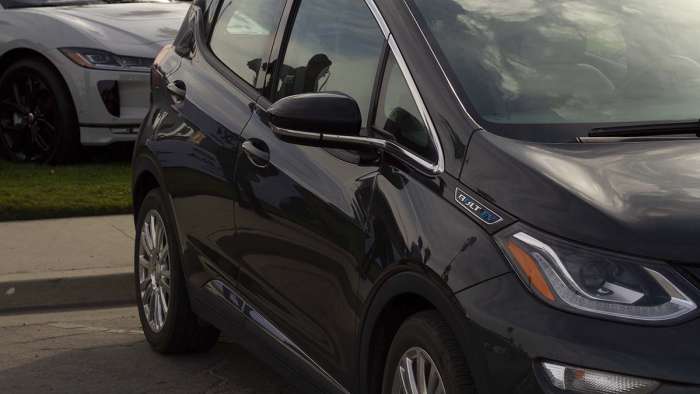 The first ever Chevy Bolt EV fire was reported. I look at why it might have happened and explain why Bolt EV owners have nothing to worry about.
Advertisement

In a recent story (translated to English by Google) out of Kiev, Ukraine, a Chevy Bolt EV suddenly burst into flames on the street, prompting a response from the fire department. The car burned to the ground, but the nearby buildings were saved with only minor damage. Despite numerous accidents involving Bolt EVs, this is appears to be the first ever report of a Bolt EV catching on fire.

EV Fires Are Not Common
Much like any rare event, electric vehicle fires tend to be over-reported relative to their actual frequency. It will probably take less than a week before this news story spreads to many major media sites, who will in turn question the safety of electric vehicles. So far, Tesla seems to be the most impacted by this fascination with electric vehicle fires, both in terms of the number of Tesla vehicles that have caught on fire as well as the amount of press those fires have received. However, Tesla is not alone in this.

A couple of Chevrolet Volts have caught fire over the years, with causes ranging from damage due to crash safety testing to a faulty 12 V battery. Recently, a new Hyundai Kona Electric caught fire in Montreal, Québec in Canada, and it blew up the garage in spectacular fashion. The actual cause of that fire appears to still be under investigation.

What Makes Electric Cars Burn?
When it comes to gasoline powered cars, it’s easy to understand why they catch fire so easily and burn so intensely. Most of us understand that gasoline is highly flammable and that oil burns very hot. However, in the case of electric vehicles, it might not be so obvious.

The truth is, just about anything in a car (ranging from cloth and plastic interior materials to some of the metals used for body panels and structure) will burn, and the batteries themselves are massive energy storage devices that can burn just as intensely as a tank of gasoline. While it’s true that some battery chemistries are more volatile than others (for instance, Tesla’s nickel-cobalt-aluminum batteries), all lithium batteries will burn.

So just like gas-powered cars, EVs can also catch fire and burn, but the fires in electric vehicles tend to be electrical in nature: Faulty wiring, shorts, corroded contacts, etc. Also, much like a ruptured gas tank, accidents or physical damage that breaches the battery case can lead to a fire inside the battery case that will eventually consume the entire car.

Yes, people like to point out that the electrical and battery fires in EVs can be more difficult to put out than fires in gasoline powered cars; however, that has more to do with equipment and firefighting strategies. Gas powered cars simply catch fire far more often than electric vehicles, so fire fighters are more familiar and better equipped to deal with those incidents. 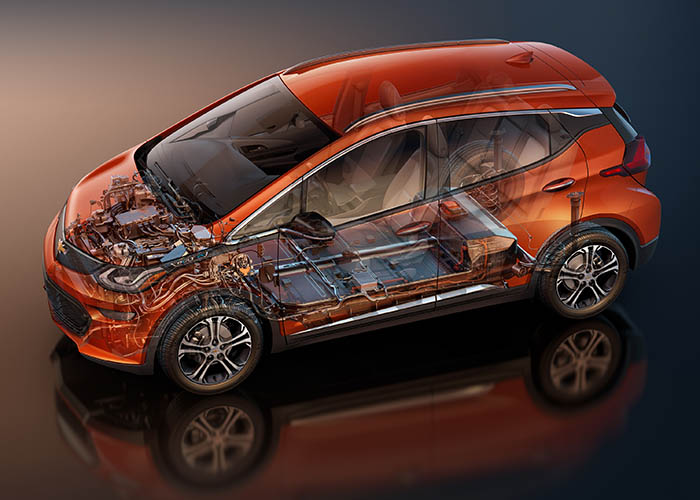 In this case, witnesses claim to have seen the fire start under the left rear wheel well, and the story references that that is the location of the battery. While it is true that a portion of the battery is located near the left rear wheel, it’s worth considering that that is also the location for both the battery’s BMS (battery management system – the control module that manages the battery’s charging, balances cells, monitors temperatures, etc.) as well as the main battery Service Disconnect lever.

Chevy Bolt EV in Ukraine
There are still a number of questions surrounding how a Bolt EV caught fire on a street in Kiev, and the first question is how it even got there. A quick glance at the smoky, low-resolution photo makes the car appear to be an Opel Ampera-E (a car someone could have actually driven to Ukraine from its original point of sale in Europe); however, the car was actually a Chevy Bolt EV. That means this car had to be privately imported to Ukraine, and GM did not design or build the car to use the power grid and infrastructure available in that region.

So, in order for this Bolt EV to get to Kiev, it had to be purchased from another market (most likely the United States), shipped, and modified to use the local power grid. Any one of those things could have eventually resulted in the car’s catching fire.

A number of U.S. Bolt EVs have been involved in accidents ranging from fender benders to serious collisions that resulted in structural damage and salvaged titles. It’s difficult enough for American car buyers to verify that the vehicle they are purchasing has never been in an accident, so purchasing a vehicle from abroad could open foreign buyers to an even higher potential for fraud and other risks.

Even if a Ukrainian buyer was able to purchase a legitimate, clean title Bolt EV from the United States, the buyer then needs to have it shipped, most likely by sea. Third party shipping by sea could also result in physical damage to the vehicle or some of its more sensitive components. For instance, a forklift could easily rupture the battery case, leaving it susceptible to corrosion and eventually catching on fire. 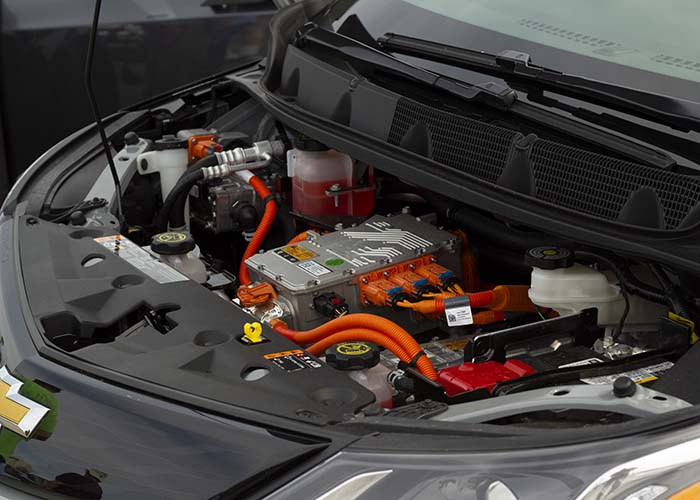 Finally, if the buyer was able to buy and ship a completely pristine Bolt EV to Ukraine, the car’s electrical system would then need to be modified to accept local power. While electricity is universal, power grids around the world vary. If this was a U.S. Bolt EV, it was designed from factory to function on a 60 Hz power feed. The Ukraine power grid runs on 50 Hz. If anything was damaged or incorrectly installed while modifying this Bolt EV to recharge off 50 Hz power, it could result in a fire.

Should Chevy Bolt EV Owners Worry?
While we might never know what truly caused this Bolt EV fire in Kiev, Ukraine (the story even referenced the possibility of arson), I think it’s safe to say that this was an exceptional circumstance. A U.S. Bolt EV shipped to Ukraine and modified to work on local power would be at far higher risk of fire than a Bolt EV (or any electric vehicle) operating in the region where it was sold. 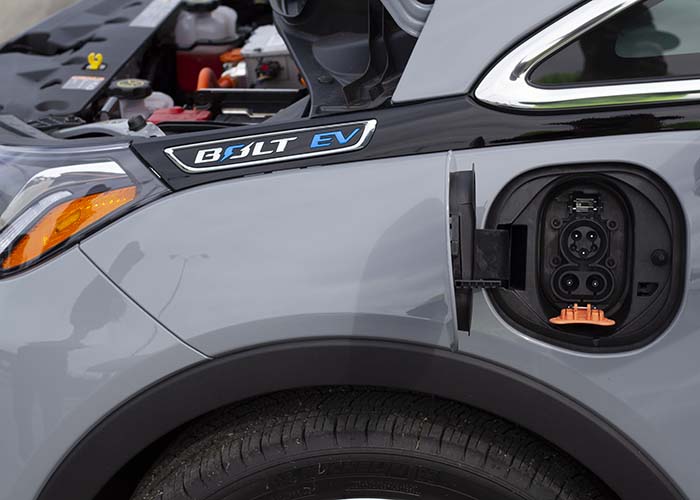 See you next time when I dive into recent Chevy Bolt EV spy shots and what they might mean!

RC wrote on September 26, 2019 - 12:02am Permalink
I see that the specifications of several EVSE's state that they support 50-60Hz input. Are you certain that the charger in the Chevy Bolt (charger, in vehicle, not the EVSE which is the "thing you plug in to the car") is not able to handle 50Hz input?
Sam Hsu wrote on September 26, 2019 - 6:18am Permalink
Large liquid spill in the trunk will short out some circuits too..
KJ wrote on October 27, 2019 - 8:01pm Permalink
Well, here's another Bolt accident with a following fire. No idea what part the battery played in the crash aftermath, but the crash was pretty severe being a head on where a Camaro crossed the center line and then a GMC Yukon rear ended the Bolt. The fire was sever too, as they are needing DNA tests to id some of the victims.
anon wrote on May 25, 2021 - 2:26am Permalink
Sorry, but this just isn't correct. I love my electric car as much as the next person, and gas cars definitely do catch fire disproportionately more often than electric cars, but this car caught fire because Chevy put a faulty battery in it. This car was almost certainly not modified, and would have no reason from a physical or electrical standpoint to need any sort of modifications to accept 50Hz power as long as the voltage is correct. Nearly all electronics can handle 50Hz power with an adaptor, sometimes requiring a voltage stepdown, just fine. The only time this causes issues is with old clocks that use line frequency for time keeping. No one can say for certain that this wasn't caused by physical damage to the vehicle unless its owner came forward and said so, but that's pretty unlikely. These things just have a tendency to become expensive pyrotechnics when charged to 100%. Wouldn't stop me from getting one, since it's been recalled already and I park outside anyway, but assuming an individual had to be at fault and turning a blind eye to the possibility that the manufacturer made a mistake is giving a corporation way too much credit.

Tsingshan's Threat to Tesla: EV Maker Is In Battery Crosshairs
Tesla-Funded Research Reveals One of The Biggest Mysteries of EV Battery
END_OF_DOCUMENT_TOKEN_TO_BE_REPLACED