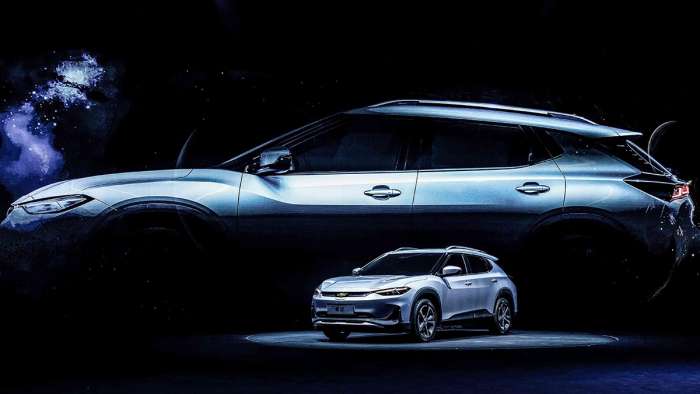 Chevrolet unveiled its new, all-electric 2020 Menlo EV. This is the first all-electric under the Chevy brand in China. It's a compelling EV; however, unfortunately, its release has been overshadowed by the fact that it is only for the Chinese market. Join me as I review the Menlo EV's specs and explain why it won't be sold in the United States.
Advertisement 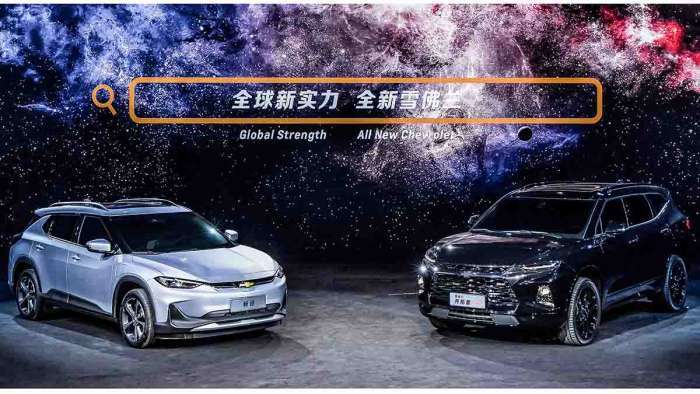 In this story, I will present some of the reported specifications and features for the Chevy Menlo EV, but I will also explore some of the reasons the Menlo EV won’t be available for the U.S. or global markets. Many reports seem to be confused about why the Menlo EV won’t be made available for the U.S. market, and I’ll share my thoughts on the potential reasons. 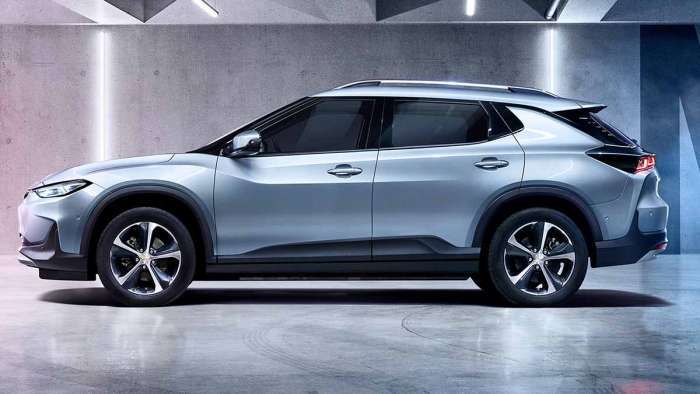 These overall proportions make the Menlo EV longer and wider (with a slightly longer wheelbase) than the Bolt EV; however, the Bolt EV is significantly taller. Despite the Menlo EV’s having a layout and size more consistent with modern crossovers, in its press release, Chevrolet referred to it as a “sporty-looking sedan.”

However, the range on the Chevy Menlo EV appears to be identical to the Buick VELITE 6 Plus, with both reporting 255 miles (410 km) on the now outdated NEDC testing cycle. We still do not have details about the Menlo EV’s battery size, but the VELITE 6 Plus is able to achieve that range with a 52.5 kWh battery pack.

Even though the Chevy Menlo EV will be launched in the first half of 2020, we are still missing detailed information and a full press release, so we currently don’t know a lot about its features. What we do know is that the Menlo EV will have the next-generation MyLink+ infotainment systems, including features such as a virtual car key, remote control functionality, and intelligent voice recognition.

Chevrolet Menlo EV Only for Chinese Market
Several media outlets have already published stories lamenting GM’s decision to not bring the Chevy Menlo EV to the U.S. market. They believe that the size and styling of the Menlo EV would be more popular with U.S. car buyers than the Bolt EV. While there is some validity to that (and the Bolt EV will be undergoing a styling refresh for the 2021 model year), a number of other factors that must be considered. It’s not as simple as manufacturing a boatload of Menlo EVs in China and shipping them to the United States for sale.

Of course, this also leads to the appearance that GM is focusing its electrification efforts solely on China while only building a single electric vehicle for the U.S. market; however, that is working from the false assumption that GM isn’t developing new platforms for the United States. One of the more confusing aspects of GM’s plans to electrify their fleet is that they are addressing the Chinese and global markets very differently. In GM CEO Mary Barra’s presentation to Barclays in 2017, she outlined a path for GM to achieve “Zero Crashes, Zero Emissions, Zero Congestion.” One of the key aspects of that vision is electric vehicles, which support GM’s mission toward zero emissions. 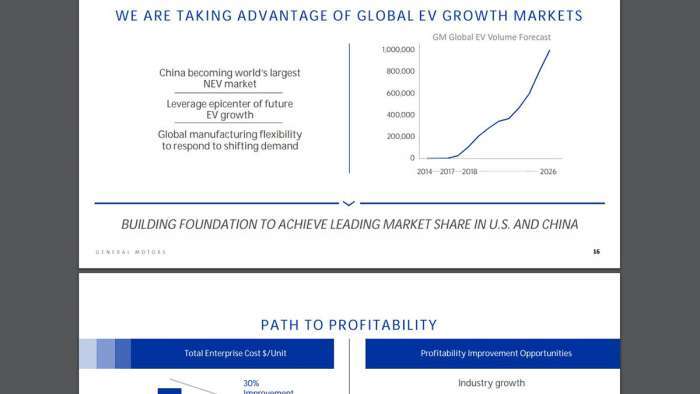 Unfortunately, that presentation and its timetables have been misinterpreted because it is addressing both GM’s global efforts as well as their Chinese market efforts. To understand those markets better, we must look at the specific announcements for each market. For instance, when GM stated that it would have several new electric vehicles to market already, it’s not that GM is behind schedule but rather that those vehicles (such as the Buick VELITE 6) were made available on schedule in the Chinese market.

In the following sections, I want to address a few of the key reasons why the Chevy Menlo EV isn’t available for the U.S. market, but I will also note why that isn’t a big deal.

Chevrolet Menlo EV is a Joint Effort
The Chinese domestic market is a bit tricky to work in, and the Chinese government tends to be very protectionist. That means that foreign companies doing significant business in China must partner with Chinese businesses.

In the case of the Chevy Menlo EV, GM actually partnered with SAIC Motor Corporation (a Chinese state-owned automotive design and manufacturing company). While we know that the Chevy Bolt EV is built on GM’s proprietary BEV2 platform, the Menlo EV’s platform is still a bit of a mystery. What we do know is that it was a joint design between GM and SAIC.

What that means for global manufacturing and distribution is that it likely cannot be done without the approval and consent of the Chinese Government. Essentially, if GM wanted to bring the Chevy Menlo EV to the U.S. market, they likely couldn’t do so without also bringing SAIC, which would significantly cut into the already marginal profitability of electric vehicles in the U.S. domestic market.

The Chevy Menlo EV Isn’t Good Enough for the U.S. Market
There, I said it. I’m not one to mince words on these issues, so here are my thoughts. While the exterior design of the Chevy Menlo EV is very compelling, it’s what’s underneath that really matters, and the Menlo EV would be very limited in the eyes of the average U.S. consumer. 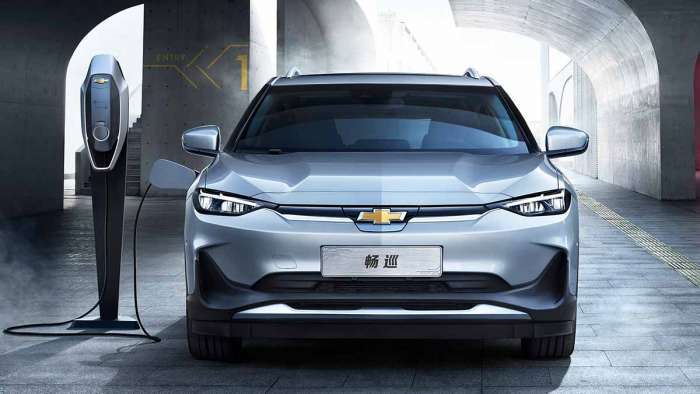 Not only is the 174 hp a bit low for what is supposed to be a sporty vehicle, it simply lacks the range that U.S. buyers find compelling. The Chevy Menlo EV’s 255 miles on the NEDC cycle leaves it nearly 70 miles short of the 2017Chevy Bolt EV (measured as the 2017 Opel Ampera-e). Translating the NEDC to EPA rated range is difficult, but most electric vehicle sites estimate that the Menlo EV would see a real-world range of 187 miles, which simply isn’t good enough to win over a significant number of U.S. buyers.

Safety is also a concern, and we simply don’t know how these Chinese domestic market vehicles would handle U.S. crash safety testing. It’s possible that they could do well; however, why would GM (or any other U.S. automaker) take that risk? GM already has dedicated electric vehicle chassis and platforms that can pass those safety tests ready to go, so why would they import one from a foreign partner?

The Chevy Menlo EV Would Compete with GM’s U.S. Products
The final reason GM has no incentive to bring the Chevy Menlo EV to the U.S. market is that it would compete with some of GM’s upcoming electric vehicles. As I stated above, a vehicle built with a foreign partner isn’t going to be as profitable for GM as an electric vehicle they build in-house for the United States Market.

TorqueNews has covered earlier stories about GM’s testing their new, upcoming electric platforms, including the rumored “Chevy Bolt EUV.” Whether the larger electric crossover ends up being called the “Bolt EUV” is still up for debate; however, what we do know is that GM is developing at least one mid-size, all-electric to join the Chevy Bolt EV in the United States by next year.

Given that the Chevy Menlo EV will be similar in size, will share similar exterior design cues, and won’t be available in China until early 2020, I don’t see why GM would even consider bringing the Menlo EV to the United States.

Conclusion
I’m excited that we are seeing GM producing more electric vehicles globally, even if the Chevy Menlo EV will be restricted to the Chinese market. The Menlo EV is a very compelling vehicle, and it might help GM maintain its spot as one of the top foreign automakers in China by annual sales.

However, I’m not at all concerned that the Menlo EV won’t come to the U.S. market. GM’s timeline and plan for “Zero Crashes, Zero Emissions, Zero Congestion” appear to be exactly on track from when CEO Mary Barra outlined it two years ago, and while the Menlo EV is a piece in that larger puzzle, we need to understand that it is just a piece.

I do think that GM should take stock in the responses to the Chevy Menlo EV, though, because its design has clearly won over a number of people who normally don’t have nice things to say about GM’s electric offerings. The Menlo EV’s exterior design and the Bolt EV’s engineering and capabilities would make a very compelling electric offering in the U.S. market.

See you in my next story where I am comparing the Chevy Bolt and Spark electric car charging port issues and corrections.

DeanMcManis wrote on November 12, 2019 - 5:39pm Permalink
I think that the Menlo is a nice looking car (if not a sedan), and it would be good if GM was offering more than one EV, especially after they stopped building any other economical cars including PHEVs. One thing that the Menlo highlights is the fact that different countries have different requirements and expectations for vehicles. In the U.S. we like generous performance, not merely adequate. Many parts of the world buyers will accept fewer features and amenities, and less expensive materials in exchange for a lower price. But not here or in Europe, so having lower power, possibly cheaper materials, and questionable safety and reliability, would be a deal-killer, even if it came at a relatively low price. So we will have to wait for the Bolt refresh and EUV model. I also really doubt that EUV is anything but a code name for Chevy's upcoming larger crossover EV. Menlo actually has a nice ring to it. Since GM announced that Cadillac would be leading the EV charge into the future for GM, I think that the next GM EV will be a Cadillac model. But with the Tesla Model Y coming out sooner than planned, and Ford's Mach-E reveal looming large, plus VW's upcoming ID.4, GM needs to escalate efforts to get the EUV in showrooms very soon, because the Bolt is about to have a lot more EV company/competition released over the next year, and GM has been silent (outside of the vague Cadillac CUV announcement) regarding specific EV products. I would hate for them to lose their EV advantage in the same way that they gave up on the EV-1. Here's hoping that they surprise us with an amazing EV (line-up?), as they did with the refreshed Corvette.