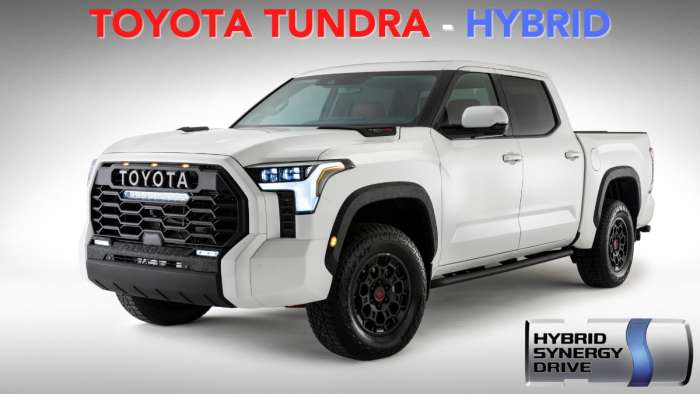 Hybrid Toyota Tundra: What To Expect in 2022

Toyota has given us some awesome hybrids over the past few decades. With the all-new Tundra headed our direction, it is only a matter of time before we see a hybrid version. Take a look at what I suspect some of the features will be.
Advertisement

As a "car guy," I have a passion for certain vehicles. Two of many I have a particular interest in are the Tundra and Prius. I own a Prius (for many reasons) so that I can afford to drive the Tundra.

At a steamy 17mpg (being gentle), it does not exactly win me over to drive it daily, though I enjoy the horsepower and room. My Prius is a fuel-sipping maniac at 50 miles per gallon and typically wins the battle of what to drive.

With Toyota set to release the all-new V6 Turbo Tundra, my heart began to race. Toyota is turning their entire vehicle lineup into hybrids (or having the option), which means Tundra will have a hybrid powertrain.

So, what does this mean for me, you, and the loads of other people that will want it? Here is why I think Toyota is going t produce another winner in the hybrid lineup.

Why A Hybrid Tundra?
Prius gave us a window into making every vehicle more fuel-efficient. With the push for better fuel economy, there is only so much we can do to try and hit those numbers.

Start-Stop technology is one of those ridiculous attempts at "helping" the issue. All it does is further complicate vehicles with unnecessary tech that is more prone to breaking. The more complicated the tech, the more money it costs to repair.

Hybrid cars are a great solution, though. You get intermittent EV driving range; they shut off when idling and use less complicated (but proven) technology. Can we say win?

A hybrid Tundra makes sense. The worst offender of fuel econ ratings needs to have an option that gives us more bang for the buck. Sure Toyota could make an all-electric pickup, but why do that when they have the proven technology now to provide you with a better pickup?

Ford, I think, is playing a dangerous game; how long has the F150 been in testing? What is the actual life span of their battery? Why are we stopping all the time to charge?

Of course, these are questions that can be answered, and I want to let you all know I do not hate Ford, but I feel the F150 all-electric is premature.

A hybrid pickup is far more thoughtful. You can efficiently fuel and have all the benefits of a vehicle with which you are familiar. It is an aging technology for sure, but Toyota has the future of transportation mapped out, and I am not talking about Fuel Cell.

What Are Some Features We Could See?
I hear people arguing already that the F150 will provide power to houses in case the electricity fails. OK, that's cool; Tundra can do that. If you have not seen what Toyota Hybrids can do, check out this article here.

Tundra can go longer (the ability to fuel up) and do all F150 does. Did I mention when you run out of power on the Electric F150, and you cannot charge, you are out of energy? Yeah, that is a thing. 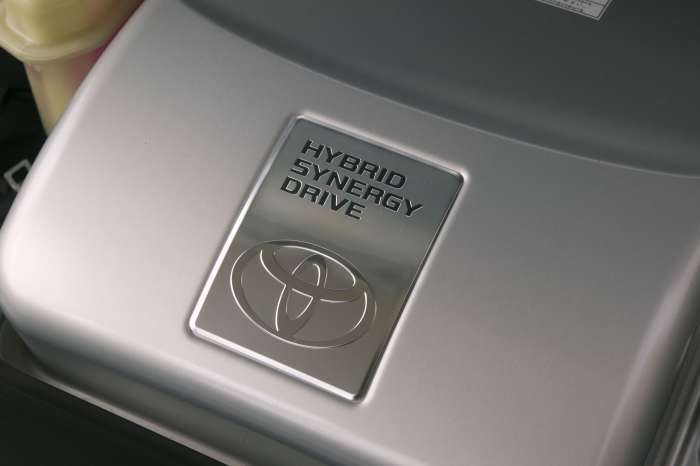 Features will, of course, include the hybrid drive system that Toyota is famous for, also the option for a power outlet (I would be severely disappointed if it did not come with the option), and more than likely AWD-e.

I think the 4x4 option in hybrid Tundra will be limited IF they use AWD-e technology found in Prius and other Toyota hybrid models. We will see, though.

I believe Toyota will offer the same engine (V6 Turbo) coupled with a hybrid transmission. I think the hybrid pack will still come in two options: Li-Ion and NiMH (Toyota cannot seem to let the old tech go).

Other features will be standard, like Apple Car Play or Android auto. Power everything is standard, and then all the safety sense hoopla comes included too.

Conclusion
The Toyota Tundra hybrid will be the new leader in the pickup market once people see the versatile benefits and fuel savings. The internet is claiming 30mpg right now, so we will see what life can bring us next year.

Which reminds me, we will not see this truck for another year at least. While this saddens me, I hope that Toyota takes the time to get it right the first time. A lot is riding on the Hybrid Tundra, and it needs to deliver.

Is the 4th Generation Prius the best one out there? take a look and see what I have to say.