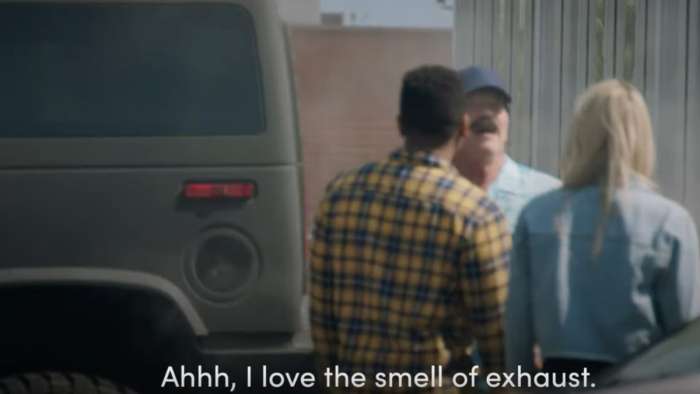 In a prank piece for ElectricForAll.org, Arnie goes undercover as a car salesman to explain, like recent Audi eTron ads, why electric vehicles aren't right for you. Or are they?
Advertisement

Electric vehicles and advertising haven't made good bedfellows over the past decade.

Whether it's the limited airtime afforded to the Chevy Bolt EV by General Motors or the preference of Tesla to focus on word of mouth rather than TV and billboards, traditional ad channels simply haven't seen much EV action. In fact, you may also want to read Audi E-Tron vs Tesla Model 3, Luxury EV has a New Player.

That changed with recent Audi eTron advertising, which focused on tongue-in-cheek anti-selling, and now Arnold Schwarzenegger is getting in on the act.

In the video above, Arnie goes undercover as a car salesman on behalf of ElectricForAll.org. His mission? Take the Californian customers who approach him with an interest in electric vehicles and convert them back to a gas guzzler.

Here's a sample discussion to give you an idea just how ridiculous it gets:

Arnie: "You know the planet is too crowded, right? Gasoline creates pollution, that curbs population. It brings it down!"

Silly, of course, but so far it's fairly effective, as the video is approaching one million views and has been shared widely across the EV community and beyond

Throughout the video, Arnie raises several fuel-efficient vehicle clichés that actually sell the benefits of EVs, such as the near-silent ride ("it's so quiet, you have to hear everything your family says!") and access to carpool lanes.

This tongue-in-cheek, "anti-selling" approach recalls the ads run earlier this year to promote the 2019 Audi eTron.

In Audi's "Not For You" ad campaign, the automaker openly raises common concerns about electric vehicles, such as charge times and winter performance, and tries to bust them wide open with sexy shots of the Audi eTron in action (please click to also subscribe to Torque News Youtube channel for daily EV and automotive news analysis).

All of this attention for electric vehicles, though approached from a potentially frivolous angle, is a good thing. It serves to address common misconceptions about EVs, showing that some are dated and others are rapidly being addressed by new technology in vehicles like the Audi eTron and, of course, every Tesla on the market.

A report from AAA last month concluded that only 4 in 10 Americans are considering an electric car for their next vehicle. The majority of respondents (59%) were concerned that EVs still don't have the range to meet their needs.

With multiple concerns around range, charging, and other areas of misunderstanding, it's clear that many Americans haven't been exposed to models that can travel more than 300 miles on a single charge.

This lack of awareness continues to undermine adoption of electric vehicles, despite the promising EV growth reported by ICCT in 2018. With advertising like the campaigns above serving to raise awareness, things can only accelerate from here, even if we have to dress more celebrities in silly disguises to get there!