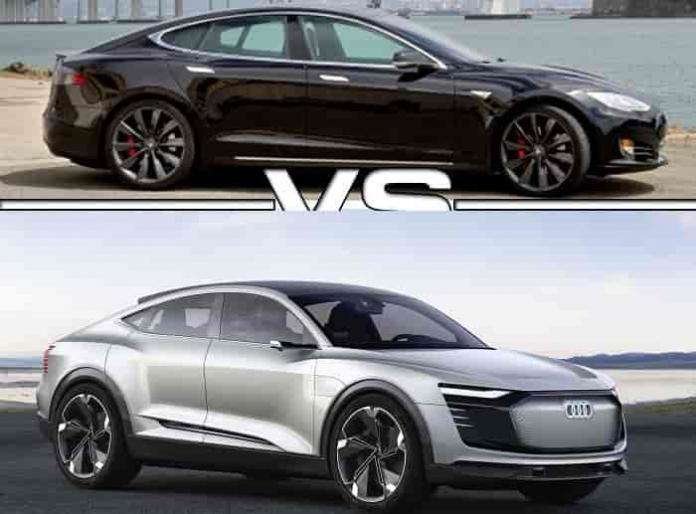 Tesla has enjoyed almost total domination of the luxury electric vehicle market since the launch of the Model S in 2012. It has continued that success through with the Model X, and now look, is poised to make a third mark on the EV market as the Model 3 is beginning to be delivered in late 2017.
Advertisement

Tesla has had very little competition in the full electric market, there was a brief stint from Fisker with the Karma. A sedan directly aimed at being a competitor to the Model S, after Mr. Fisker himself had worked with Tesla to design the Model S. The Karma, however, was not full electric it was still hybrid generator technology, but it was designed for luxury clientele, including Justin Bieber at one point. Fisker went under in a relatively short amount of time due to the serious gambles taken on component selections that did not pay off. BWM has taken the plunge into the electric sector as well, however the i8 has not been gaining the kind of ground on Tesla one might expect, many would point to an MSRP of more than $140,000. On top of the fact that the i8 is not all electric, but again technically a hybrid, and the i3, BMW’s only all electric vehicle, has no direct competitor to anything current produced by Tesla.

Now, though, as the first Model 3s have been delivered and Tesla begins to ramp up production for mass delivery in 2018, Audi had announced testing of its new concept all electric vehicle. They’re calling it the E-Tron Sportback, interestingly the “E-Tron” name has been applied to a few Audi concepts and vehicles in the past whenever electric drive is involved. The Sportback seems poised to give the Model 3 a run for its money.

Here’s what we know about Audi E-Tron

The E-Tron will come equipped with a dual motor, one rear and one front, 429-hp electric drivetrain that includes a “boost” mode supposedly upping the power output to 496-hp. All this juiced by a 95-kWh lithium-ion battery pack, that Audi says will provide up to 310 miles of range on a single charge, and a 30-minute fast charging ability, that would replenish more than 200 miles of range. Sounds very closely aligned with Tesla’s current vehicle capabilities, which should help make Audi’s formal entrance into the EV market even stronger. Although we do not know a price point of the E-Tron, the timing and sedan appearance seems to hit towards a Model 3 competitor.

As Audi helps to fulfill Volkswagens strategy of leaving the electric vehicle category by 2025, consumers can look forward to more options for all electric transportation. I’m not sure what a new competitor to the market will bring but in the past competition has been very beneficial to consumers in the automotive industry. With a heavy hitter luxury brand like Audi entering the market, consumers could see price reductions and more availability soon.