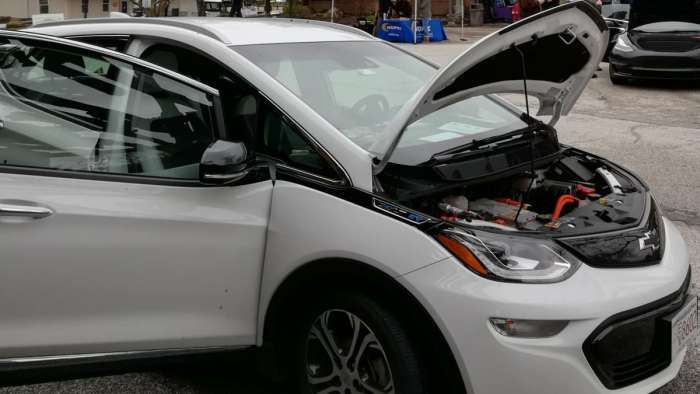 GM’s first all-electric vehicle hit some dealerships in late 2016, so how is the Chevy Bolt EV’s reliability holding up as some early adopters hit six figures on the odometer?
Advertisement

General Motors comes in for a lot of flak from many corners, but the reliability of its electric vehicles is not often one of those criticisms leveled at the automaker.

Despite the frequent and unsubstantiated assertion from critics that the battery will be the most troublesome part of any electric vehicle to maintain, long-term owners of the Chevy Volt plug-in hybrid report excellent performance from the electric portion of the much-loved car.

Relieved of the burden of so many combustion engine parts, it follows that the all-electric Chevy Bolt EV reliability is shaping up to deliver an even better record than its now-retired predecessor. Let’s explore several key aspects of the vehicle and see if the Chevy Bolt EV is a reliable car to drive so far.

Although GM’s Voltec powertrain was established and widely respected by the time the Bolt EV came along in 2016, the automaker had no track record with all-electric cars -- the EV1 fiasco notwithstanding. In fact, the Bolt EV was the first of its kind for any manufacturer at this mid-range price point, with Tesla still a year away from widespread delivery of the Model 3 and the first-generation Nissan Leaf’s range unable to stretch past the 200-mile mark.

At the same time, Nissan experienced some criticism about its battery management system and premature pack degradation, fueling concerns that new electric models like the Bolt EV would see similar problems two or three years down the line.

Well, here we are almost three years later, ready and able to judge just how reliable the Chevy Bolt EV has been to date.

Chevy Bolt EV Recalls
As with most cars, the Chevy Bolt EV has seen a handful of recall notices over its three model years.
One of the most recent, posted in September of 2018, covered an issue with the brake pistons that could reduce braking performance. The recall involved various models across GM’s stable of brands, including the higher end Cadillac and GMC labels, and was easily fixed by a free service at a local dealership.

To find recalls specific to the Chevy Bolt EV, we have to travel further back to the 2017 model year (the car’s first) and an issue unique to electric vehicles. In the spring of 2018, GM issued a voluntary recall for the 2017 Chevy Bolt EV and some early production 2018 models, involving a software issue in the battery management system.

While that issue was also a relatively simple fix with a new software update delivered by dealers, it does highlight an ongoing limitation for General Motors and other legacy manufacturers: the lack of OTA updates. This was one of our three items for GM to fix on the Chevy Bolt EV last month and remains a feature that would quickly raise the company above its immediate rivals, as well as that little bit closer to Tesla.

Going back further still, to the earliest 2017 Chevy Bolt EV model year, we do begin to find more serious teething problems for individual owners, such as replacement battery packs and problematic charge ports.

I recall a handful of tales on various Bolt EV forums about owners noticing diminished range and visiting their dealership expecting a minor fix, only to be told that they would receive a completely new battery pack for the vehicle.
It’s important to note, however, that these were individual issues that never received a wider recall.

GM reportedly went out to around 100 early owners to diagnose and remedy the cell leveling problem, so that those who follow them would never experience the issue. They are isolated cases in the first year of a new vehicle, driven by new technology and a new drivetrain.

All things considered, out of more than 50,000 Bolt EVs sold to date, the relatively small number of battery-specific problems - and the fact that they have largely occurred in early production vehicles - can be taken as a positive sign that General Motors has a firm handle on the monitoring and maintenance of its EV platforms.

(Anecdotally, I drive a 2017 Chevy Bolt EV that falls into the early production category and have only good things to report about battery capacity and performance!)

General Wear and Tear
This is perhaps the most vulnerable category for Bolt EV on reliability, because Chevrolet is positioned as a more affordable vehicle brand. As such, the components used in the Chevy Bolt EV are cheaper and more susceptible to scratches, dings, and other minor malfunctions that are nonetheless annoying for the owner.

Having never been as active in owner forums as I am with those of the Bolt EV, it’s hard to judge just how much of the criticism is commonplace for any vehicle in this class and how much of it is specifically down to the Bolt EV.
It isn’t unusual, for example, to have a couple of posts every week about unidentified noises and minor frustrations with parts of the car. Needing to reboot the Bolt’s infotainment system or having a wiper settle in the wrong position might not seem like reliability issues, but they speak to a broader view of overall quality and upkeep.

In terms of Chevy Bolt EV reliability, though, very few of the reported issues around wear and tear restrict the daily operation of the vehicle.

Perhaps the only true glitch that I’ve personally encountered over 25,000 miles that would fall into this category is phantom signals from the blind spot detection system. These started to appear around 17,000 miles in and are genuinely distracting, as they take the driver’s eyes off the road for something that isn’t there. Again, though, this was quickly fixed at a routine maintenance visit to our dealership. The technician also noted it as an issue that has appeared on other non-electric Chevrolet models, laying this issue more at the door of the brand, rather than one specific to Chevy Bolt EV reliability.

Allowing for a certain degree of cost-cutting and the inevitable fact that this brand doesn’t come with the same robust build and attention to detail that a high-end automaker might bring, general wear and tear on the Chevy Bolt EV is roughly what one would expect to see.

Battery Degradation
Tracking battery degradation is not as simple as it could be on the Chevy Bolt EV. Whereas first-generation electric vehicles like the Nissan Leaf offered a clear battery bar system and the Chevy Volt had a relatively low electric range that made it more noticeable when several miles disappear from a full charge, the Bolt has neither of these.

If I get fewer miles on a full charge than expected, it’s unlikely to show battery degradation. It’s typically because I’m going faster, using the HVAC system more often, or driving in significantly different temperatures than were experienced over the last full charge.

In order to accurately measure the Chevy Bolt EV’s reliability in terms of battery longevity, we would need to accumulate various data points from a broad section of Bolt EV drivers with diverse use cases. We know that General Motors has access to such data through its OnStar diagnostics system, as this is how the company flagged the isolated battery pack issues mentioned earlier.

Whether or not the automaker will share results with owners is another question, but CEO Mary Barra has proudly announced, on the topic of Chevy Volt and Bolt EV reliability, that no battery on these models has ever been replaced due to common degradation through everyday use.

For what it’s worth, the video below documents one high mileage owner’s attempt to calculate degradation and current battery reliability on his 2017 Chevy Bolt EV.

Again, it should be noted that this is just a single data point and other owners have questioned whether it can be applied to newer models. Measuring by range or available battery capacity can vary significantly across different vehicles and possibly even model years, as we can see from the improvement of battery management software in the 2019 Chevy Bolt EV.

Battery degradation is by its very nature a long-term concern and it really is too early to say for certain that the Chevy Bolt EV’s reliability in this area is assured. What we do know is that drivers with almost 100,000 miles under their belts report remarkably little degradation, even after potentially debilitating user habits such as regular DC fast charging and driving in extreme heat.

From what we know so far - and coupled with the proven reliability of the more complex Chevy Volt - the Chevy Bolt EV’s battery is carefully managed and can be relied upon to keep delivering more than 200 miles per charge well into the car’s life.

That being said, we’ll be taking a deeper dive into battery management and Chevy Bolt EV reliability in this area for a future story, so stay tuned if it’s a subject that interests you.

In summary, the Chevy Bolt EV has had its share of early battery teething problems specific to electric vehicles, as well as minor quibbles that would affect any vehicle, whether electric or combustion engine.

On its third model year, however, and backed up by the impressive track record of the Chevy Volt, Chevy Bolt EV reliability appears to be very good. General Motors has the battery pack management in a place that may feel conservative to some drivers, myself included, but which stands to deliver greater longevity to the car’s most critical component. The thermal management system is likely to negate some of the problems that afflicted the first-generation Nissan Leaf models and which continue to dog the brand to this day.

Here's more on why Nissan lost its lead as the premier non-Tesla EV brand.

A visit to any Chevy or GM electric vehicle forum should confirm the reliability of the Chevy Bolt EV, as well as highlighting a few niggling issues that owners still experience. In the grand scheme of things, the car's record is starting off very well given the troubles that more other manufacturers are facing.

If you drive a Chevy Bolt EV or a Chevy Volt, let us know in the comments how it’s holding up. See you in the next story where I am discussing what should be the minimum acceptable range for electric cars based on the case of 2020 Mini Cooper SE.

If you avoided the car on grounds of reliability, share what the problem was with us and if your alternative worked out as expected. See you in my next story where I am discussing 6 tips to prepare your electric car for the winter.