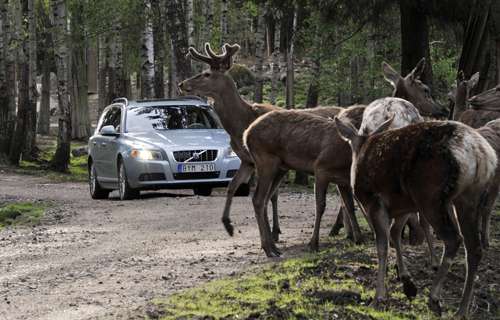 Volvo working on technology to avoid collisions with wild animals

It's not quite ready for prime time, but Volvo is expanding its remarkable Pedestrian Detection with Full Auto Brake, a system that automatically applies a vehicle's brakes when a collision with a pedestrian is imminent, to include a similar response to animals in the vehicle's path.
Advertisement

The Volvo animal-detecting system is based on a radar sensor and an infra-red camera, the latter important because the system must work at dawn and dusk, when most collisions with wild animals occur, and as Volvo notably puts it, "during the dark winter months."

The Volvosystem works with the camera scanning the road ahead, the system's computer recognizing an animal and then alerting the driver with an audible signal. If the driver does not respond, the system applies the vehicle's brakes automatically. The system is capable of bringing the vehicle to a complete stop.

"In cases in which it cannot help the driver entirely avoid the collision, the system will slow the car sufficiently to help reduce the force of impact and thus serious injuries," said Andreas Eidehall, a technical expert at Volvo in Sweden.

Recognizing different animals is one challenge for the system. Volvo says that the development team "spent an evening at a safari park digitally logging film sequences of animals and their various behavioral patterns." Fodder was laid out to attract animals along a trail, and while driving slowly along the trail, the team collected data to use in developing the system.

Volvo's development team has been working primarily on moose, red deer and fallow deer, large animals that pose a risk to passengers in an impact. "In an impact with a moose there is relatively high risk of personal injury since it is common for the animal to end up on or roll across the front of its windscreen," said Eidehall.

Following the deployment of the human detection system in 2010, work on Volvo's system to avoid animal collisions has been underway for about a year. Volvo's development team is working not only on the recognition system but also on the decision-making mechanism, or when and how the system responds.

Eidehoff said, "We can see in our accident statistics that this is an important area to prioritize. What is more, we know that here is considerable market interest in this type of safety system. During demonstrations of Pedestrian Detection with Full Auto Brake, we were often asked about protection from accidents with wild animals."

A commercial version of the Volvo system to avoid collisions with wild animals will debut, said Eidehoff, "within a few years."

Judith Salyer wrote on June 13, 2011 - 8:52am Permalink
This is AWESOME! Once again Volvo proves that it is the PROGRESSIVE automobile manufacturer!
Grace wrote on August 19, 2011 - 5:23am Permalink
As far as technology is concerned Volva have always come up with latest technology and this collision avoidance technology is pretty impressive. I hope this technology will help Toyota users and will offer a great driving experience. <a href="http://newcars.indiandrives.com/carmodeldetails.php?make=Volvo&model=Volvo_XC60">Volvo XC60 Prices</a>