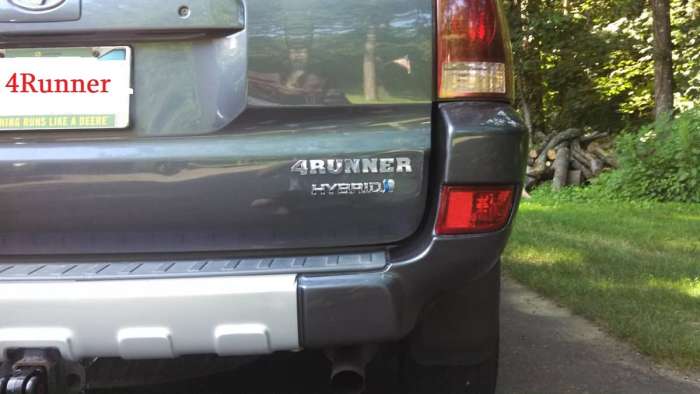 The Toyota 4Runner is a proven commodity for many reasons: dependability, off-roading capabilities and for being really fun to drive. Could a 4Runner Hybrid be next?
Advertisement

Toyota is in the midst of a remarkable shift in philosophy from a gasoline mindset to one of electric. The giant automaker recently announced an aggressive company-wide plan toward electric-driven sales. This includes EVs (electric vehicles), along with hybrid and hydrogen vehicles.

In fact, Toyota plans for 50% of its global sales to be electric-related by the year 2025. This is not the entire story, though. The most remarkable fact is that Toyota originally planned for this lofty goal to be accomplished by the year 2030. They recently bumped this deadline up by a whopping 5 years.

With sales skyrocketing for popular models like RAV4 Hybrid and Camry Hybrid, I can see why public demand has altered Toyota’s thinking. People want fuel efficiency. They also want to protect their environment.

This leads me to wonder what models will follow suit in the coming years. Could Toyota 4Runner be next?

What does 2019 Toyota 4Runner bring to the table now?

First off, the 2019 4Runner is available with a 4.0-liter V6 engine that produces 270 horsepower and 278 lb.-ft. torque. This is paired with a 5-speed automatic transmission.

People in the market for a durable and reliable SUV often look to the Toyota 4Runner for a variety of reasons. As it is a body-on-frame design, it was built to withstand the challenging twists and pulls and strains that treacherous, uneven ground and terrain can put on an SUV. The 4Runner is often referred to by industry enthusiasts as “the last true SUV on the planet.”

For those owners who plan on staying mainly on city streets and long stretches of highway, a 4x2 rear-wheel drive (RWD) 4Runner is a logical choice. Part-time 4WD is most common in the 4Runner, and this is for those folks who need four-wheel drive performance in heavy rain, sand, mud, snow and for challenging terrain.

Why would a Hybrid Toyota 4Runner make sense though?

All auto manufacturers must constantly monitor government requirements and respond accordingly. Continuously changing industry-wide mandates will force automakers to improve their individual model and brand fuel efficiency within the next few years. This will affect not only passenger cars, but also trucks and SUVs as well.

It is expected that a new redesigned Toyota 4Runner will make its way into dealerships for the 2022 model year. With it should bring not only updated exterior and interior styling, but also an updated powertrain as well.

Not every driver of a 4Runner plans on using it to its maximum limits while traversing that next difficult mountain pass. Many use it as a commuter or family road trip vehicle. This may fit perfectly with the development of, dare I say it, a 4Runner Hybrid.

Toyota 4Runner Hybrid – it has a certain ring to it

Offering a Hybrid alternative to the 4Runner lineup makes sense in a number of ways. First off, improving that all-important MPG will satisfy higher government fuel expectations. Also, it will save owners tremendously in their wallets.

What could fuel estimates be for a 4Runner Hybrid?

Toyota already has an extremely impressive fleet of Hybrid models to offer its customers.

The all-New RAV4 Hybrid features fuel mileage of 40 MPG combined. The Prius offers drivers up to 56 MPG combined, while Prius Prime can back up its estimates of an unbelievable 133 MPGe. Drivers can expect up to 52 MPG combined with its very popular 2019 Camry LE Hybrid.

What about the SUV market? Excitement is building for the arrival of the all-new next-generation 2020 Highlander that will hit dealerships around December. The Highlander Hybrid will show incredible MPG estimates rated at an incredible 34 MPG combined.

This brings me to my speculation on what a 2022 Toyota 4Runner Hybrid would look like at the gas pumps. Do you think we can expect to see it would rate at a combined 25 MPG? Could it reach or surpass 30 MPG? Also, would you be interested in purchasing a 4Runner Hybrid if it was made available?

Thanks for reading everyone. See you next story…

Tesla-Funded Research Reveals One of The Biggest Mysteries of EV Battery
Tesla Tesla Buyer Nets a Whopping $12,000 Discount After Asking for Reduction
END_OF_DOCUMENT_TOKEN_TO_BE_REPLACED