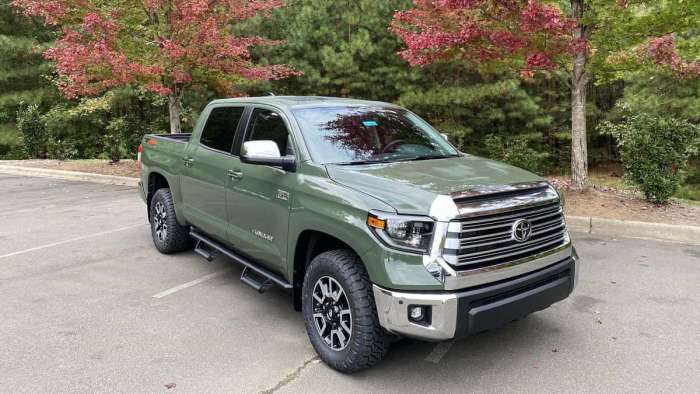 Next-gen 2022 Toyota Tundra: When We Could See New Hybrid for Sale

When will next generation 2022 Tundra and Tundra Hybrid be available to the public? What we know so far.
Advertisement

The truck world is waiting for Toyota to announce more details and specifics about its third generation full-size Tundra. Yes, that is right – there have been just two generations before this upcoming one.

Toyota Tundra was last redesigned in 2007, although there have been refreshes and updates since then.

Related: Top updates to look forward to with 2020 Tundra 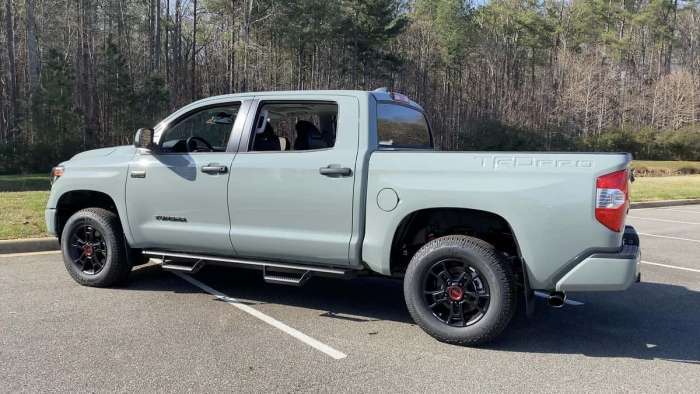 Many Toyota fans and truck enthusiasts are playing the guessing game these days about potential 2022 Tundra specs.

We know the powertrain will change and “assume” this will be the last model year for the Tundra and 5.7-liter V8 engine marriage.

More than a few people are counting on some form of a twin-turbo V6 engine. Potentially a 3.5-liter twin-turbo V6.

Matching with Toyota and its aggressive initiative to offer every one of its cars, trucks and SUVs with a hybrid or alternative fuel option, Toyota Tundra seems to be following suit.

As a matter of fact, Toyota is shooting for 40% of its total vehicle sales to be hybrid, EV, plug-in hybrid, BEV or hydrogen fuel-cell by the year 2025. This number jumps up to 70% of total sales by 2030.

I recently wrote a Torque News story speculating that 2022 Toyota Tundra could also come equipped as a plug-in hybrid, in addition to a traditional hybrid.

This was, of course, just speculation, since Toyota announced recently that there will be a new plug-in hybrid launched in 2021. I am not so sure I think this vehicle will be the Tundra anymore.

All signs point to 2022 next-gen Tundra trucks beginning to reach local dealerships across the country by the end of the year. This means around December time, which of course could spill into January of 2022.

In the past, when Toyota introduced a new hybrid vehicle, that hybrid option is released a few months later than the gasoline-only version.

VIDEO YOU MAY ENJOY: New features and trim levels coming to 2021 Toyota Tundra

With that being said, I would not be surprised to see a 2022 Toyota Tundra Hybrid for retail sale in the spring. It could be March or near that timeline.

Your thoughts on Toyota Tundra

Again, nothing is known. There has not been any confirmation from Toyota to the public yet. No specifics. No release dates.

What reasons do you have for either pursuing this next generation or for keeping your current one?

Thanks for reading everyone. See you next story when I compare RAV4 Prime vs Prius Prime.

Biff wrote on February 24, 2021 - 11:41pm Permalink
On my 3rd Tundra. I feel the recent media excitement about a Tundra hybrid is a disconnect with what most large truck buyers want, a V8. I would never buy a hybrid Tundra. I also won't be too keen on a V6 only Tundra. I don't like the idea of a smaller, revved-up, higher stressed engine for a truck powerplant. My Tundra dream would be that they bring back the 4.6L V8 and put a twin turbo on that engine, along with a ten-speed automatic transmission.
Rick Wainio wrote on February 24, 2021 - 11:54pm Permalink
These companies are talking about Hybrids. Meanwhile, Elon Musk and Tesla are going to blow them all out of the water and they'll all be wondering what happened lol.
Keivan wrote on February 25, 2021 - 9:16pm Permalink
Well, we have to wait and see. The snowstorm in Texas showed how crappy the power grid is in the US. Just imagine having 300 million EVs on top of that. For EVs to become a reality, the power grid needs to be fully modernized. I have not seen anything that points to that. Without a modern power grid and delivery, EVs cannot become commonplace.
Ben wrote on March 1, 2021 - 12:11am Permalink
You really cant compare what happened in Texas to the rest of the US seeing as Texas runs an independent power grid and refused to set up the power grid for winter conditions.
Craig Winters wrote on February 25, 2021 - 12:56am Permalink
I'd be more interested in a diesel option.
Leonard Swann wrote on February 25, 2021 - 12:29pm Permalink
I would never EVER buy a first year anything again! Many manufacturers push out their products without nearly enough research and testing for reliable and quality products. They rely on the consumer to do the testing of the Beta product and wait to see what problems the consumers brings to them and in the meantime the comsumer gets stiffed!
Ramzi wrote on February 25, 2021 - 1:12pm Permalink
If Toyota don’t show us the new tundra by March I will go and buy gm truck I’m sick and tired of waiting I have tundra now it’s time to upgrade So if they don’t reveal any real news about the tundra I will just switch companies
Yota wrote on February 26, 2021 - 10:55am Permalink
Completely agree, this has been rediculous!! I love toyota, but they are going to loose customers like ourselves if they don't clean up their act and get on with releasing the hybrid trucks!!! Been waiting way to long for this tundra hybrid release!!
Thomas Wheeland wrote on February 26, 2021 - 3:02pm Permalink
We are all waiting for next Gen Tundra. The waiting is driving most of us insane!!! Get on with the reveal already... Auto Shows are cancelled... just do it already TOYOTA!!! Show us what we should wait to buy or if not then we will all go buy something else soon bc wait is rediculous at this point LOL
Sportsman207 wrote on February 27, 2021 - 12:28pm Permalink
Totally agree! I have a 2018 platinum and really want to get a pro but won’t do anything until a new design. Already have had two of basically the same truck and want something different. Toyota is falling behind and I will look into other trucks if they don’t hurry up and release this long awaited redesign.
Tim wrote on February 28, 2021 - 9:45am Permalink
They need to hurry up. If currently drive a ridgeline and love it but need more towing capacity and I'm tired of driving a "pilot w/ a box" that only gets 14mpg. I'm considering rivian at this point. Toyota is just too slow to change lately and recent comments from their ceo don't inspire much confidence.
Manuel wrote on March 11, 2021 - 11:01am Permalink
I live in Europe and I would live a full size truck. For me, Toyota is clearly first option. Unfortunately, Europe is dumping diesel engines. They also talk about phasing out gasoline engines. So it has to be a hybrid or EV. The EV technology is not mature yet. Even more for trucks. So... Toyota, what are you waiting for??? People are waiting!

Tsingshan's Threat to Tesla: EV Maker Is In Battery Crosshairs
Tesla-Funded Research Reveals One of The Biggest Mysteries of EV Battery
END_OF_DOCUMENT_TOKEN_TO_BE_REPLACED