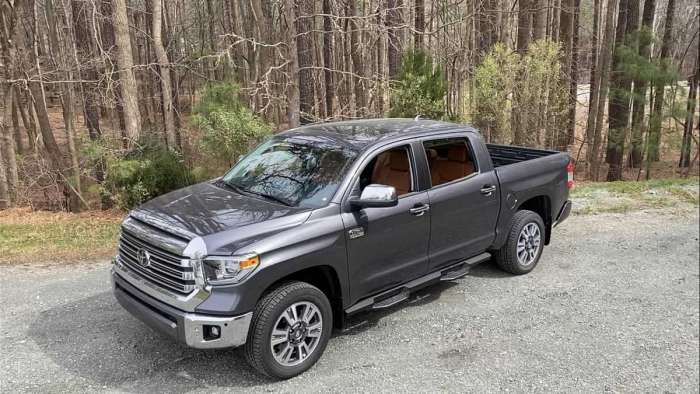 I have been experiencing this phenomenon for fifteen years since I have been reviewing vehicles.

When a popular model is redesigned, or even refreshed, current owners and enthusiasts speak out on both sides of the love / hate meter.

Some will absolutely fall in love with the changes, while others will not care for them at all.

These new changes and updates are polarizing.

Everything new for 2022 Tundra 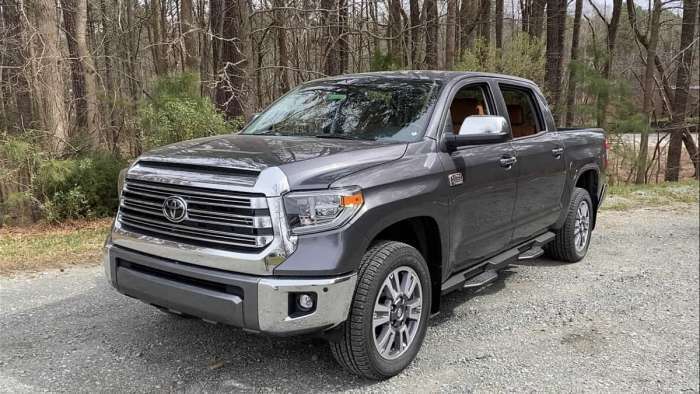 I recently wrote a story for Torque News detailing fan feedback on a potential new transmission coming for 2022 Toyota Tundra.

It is like a Star Trek movie. “Toyota Tundra: The Next Generation.”

Why is this one so special, though? Not the movie, the truck.

Well, Toyota Tundra has not been fully redesigned since 2007. This was the year where Tundra instantly became “Truck of the Year.” Tough. Reliable. Dependable. Still going strong.

But it has been nearly 15 years in one body. That is 83 years old in human years according to almanac.com.

In short, it is time, and we cannot wait.

And a new powertrain. 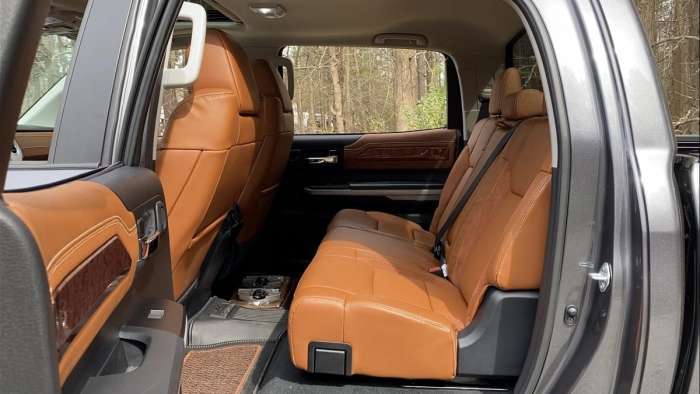 The first point I can make about next-gen Tundra is that no news has been released by Toyota on either the engine or transmission being used.

I would not be allowed to reveal specifics anyway until Toyota releases this information. As the Mandalorian states, “This is the way.”

However, I can tell you some of the rumors I am hearing all over social media.

A 2022 Tundra may come with both a gasoline-only and a hybrid engine. I have been hearing talk of either a 3.5-liter or 3.7-liter V6 twin turbo engine. Probably no more 5.7-liter V8 engine, although many fans would like this to stay as an alternative.

As for transmission, Tundra next-gen could come with either an 8-speed or 10-speed automatic transmission. There is plenty of chatter pointing to the 10-speed, at least for the gasoline-powered 2022 Tundra. Not sure what a Tundra Hybrid will come with.

I do think whatever Toyota chooses, we will see a big increase in horsepower, torque, mpg and towing capacity.

We might even see a new 2022 Toyota Tundra cab configuration.

There will be a controversy no matter what powertrain combination is revealed by Toyota.

Since my story was published, I have gotten plenty of feedback and opinions and suggestions related to 2022 Tundra. Here is a sampling. 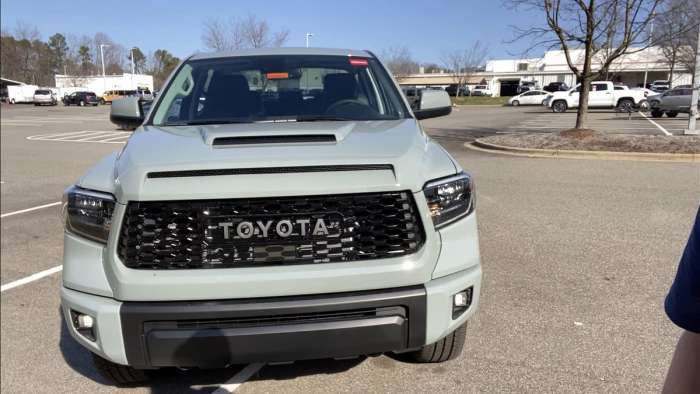 Tron commented. “All I want is a hybrid version with close to mid 20’s mpg. If I get that then I’m fine. I feel everything else they will work out. I’m on the edge. I love the new Highlander. I’m holding out for this to be announced. They are making it really hard.”

“I have had 4WD Tundras since 2006 my current truck was bought new in 2012 and has 70k miles. Why would I think of myself as being more qualified to choose a tranny than the Tundra team? Tundra is a wonderful vehicle and at age 75 my current Tundra may be my last-who knows? In any event, if I buy a new or not, I hope the folks at Toyota don't listen to some fanboy.” Said Bjorn.

“I work for Ford. 10spd suck. New F150/Mustangs/Expeditions in the shop all day long with issues. No thanks.” Commented Brandon.

Ramon is going 8-speed with his pick. “The 8 speed from the Lexus SUV is fine.”

“Hope they stick with 8 like what is in the Land Cruisers. The zf 8 speed has proven that 8 is just right.” Replied Pranav.

“10 speeds in the Ford F series trucks have been pretty awesome.” Added Harold.

“I'd prefer 8. Too much seeking for the right gear with 10. But I'm keeping my 2019 forever so my opinion doesn't matter.” Your opinion definitely counts Patrick.

Allen is in a different but popular camp. “They need a diesel to compete. I’d be sold if they came out with a 12 valve Cummins Tundra.”

“If Toyota does a 10-speed they’ll do it right I’m just hoping they keep the 5.7 or do the next generation of the iforce v8s.” Adam had great suggestions.

It is clear that opinions are running strong in many different directions over Toyota Tundra next generation.

Do you have a guess or a hope for either 2022 Tundra engine or transmission?

How about a Tundra Hybrid? What type of mpg ratings do you need to see in order to have interest in the Hybrid?

See you next story when I discuss whether this funky fresh new Toyota release could soon make its way to the United States.

Patrick wrote on March 17, 2021 - 8:30pm Permalink
Twin turbo v6, gas and hybrid options. 8 spd for now, maybe 10spd later. Maybe a diesel option. A Toyota version of the rambox and mega cab. Maybe an onboard generator too. For them to wait this long, they gotta come out swinging.
Jean wrote on April 10, 2021 - 8:18am Permalink
Agree with Patrick and we hope for 6 places crewcab with lot of space and a box of 7’ to be able to close tailgate with a atv. 6 places cab became the future way with family reconstituted. In F150 the 6 places can be very well equiped. I hope to 2022 Tundra will be more than a base version.
Robert Muniz wrote on March 18, 2021 - 12:42am Permalink
Hi Jeff, I like your videos a lot keep the good work and honesty. Now, me personally I like either one meaning v-8 or v-6 turbo charge or not but, have it withe 8 speed transmission. It won't sleep at all.
Ramzi wrote on March 18, 2021 - 1:23am Permalink
Toyota stop playing games and release it already Im Sick and tired of playing the waiting game I have my tundra for almost 6 years already need to upgrade ASAP I will wait if I see the official release from Toyota but if they don’t do it by end of April I will go to GMC Or Ford raptor Just do it Toyota release the Beast
Conkuer Customs wrote on March 18, 2021 - 1:18pm Permalink
I had a '14 Tundra SR5. Loved and miss the truck. Why did I get rid of it, didn't tow for $%&! Toyota is losing so much commercial presence from that very problem. Dropping the V8 would end the true TRUCK following it has built. We need a 3/4 ton truck for the people that actually use a truck as a TRUCK. Keep the V8, just upgrade it for highway mileage, not the engine killer system GM has, and change the transmission tuning that "protects" it while towing in cruise. "You should never tow in cruise" BS!! I went to a '12 Cummins Billy Goat for that very reason. To tow across the country, IN CRUISE, and enjoy the experience. The 8.0L Hino Diesel would be a nice power plant for the 3/4 Tundra, just sayin ;-)
jacob wrote on March 18, 2021 - 6:06pm Permalink
I think that the next Tundra will only come as a hybrid as it seems to be that the newest Toyotas like the new Venza and Sienna are only offered as hybrids Likely have 2 options a base single turbo 3.5 V6 and a twin turbo 3.5 V6 hybrid as a option
Keivan wrote on March 18, 2021 - 11:32pm Permalink
I don't understand this obsession with Turbo V6 in a pickup. GM, Ram, Ford, Toyota, and Nissan ALL offer a naturally aspirated V8. Only Ford offers a Turbo V6. The idea of a smaller displacement turbo V6 was to improve MPG. But EcoBoost gets the same MPG as 5.0 V8 in everyday driving, and gets worse MPG when towing. It does not have the engine braking of a V8 (essential for towing in mountains), and there are reports of it heating up when towing uphill in the summer (Haven't seen any such report for 5.0). Tundra gets worse MPG because its 600# heavier than other pickups, has a 6 speed auto, and 4.3 axle ratio. If Toyota sheds 200# of weight, put an 8 speed auto in Tundra, and maybe reduce the axle ratio to 4.10, the MPG becomes competitive. No need to fix something that ain't broke.
Joe wrote on March 18, 2021 - 11:48pm Permalink
Would love to see a dually with a diesel capable of pulling a fifth-wheel camper. 5.7 dually capable of pulling a fifth-wheel camper.
Charles Wright wrote on March 19, 2021 - 7:06am Permalink
I own a 2008 Tundra. Best truck ever! 220,000 miles never a problem. This 5.7 v8 is absolutely awsome!
Brian wrote on April 20, 2021 - 10:16am Permalink
I have a 2019 tundra TRD with dual exhaust and would be very disappointed if they drop the V8, people these are trucks if you want hood gas mileage buy a car, I was told that once. If they offered different rear gear options your mileage would change
Nick wrote on May 24, 2021 - 9:16pm Permalink
Bought 2007 back then it was one of the first to offer a 6speed. It is a tow beast . Have NEVER had any issues at all. Besides tires and brake replacements. Quality in build is exceptional .love this truck!

Tsingshan's Threat to Tesla: EV Maker Is In Battery Crosshairs
Tesla-Funded Research Reveals One of The Biggest Mysteries of EV Battery
END_OF_DOCUMENT_TOKEN_TO_BE_REPLACED