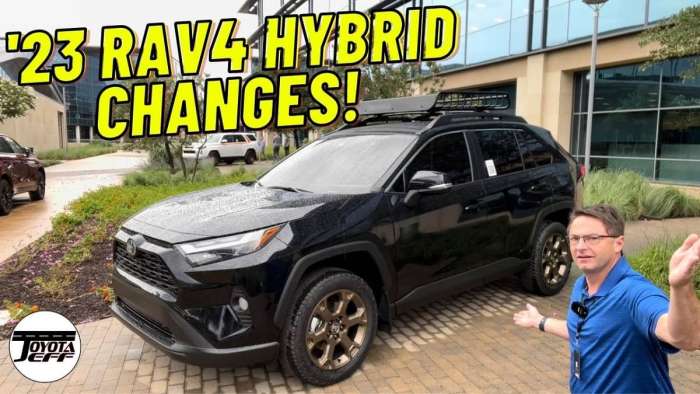 Full list of what is new for 2023 Toyota RAV4 and RAV4 Hybrid. You will like these updates.
Advertisement

Advanced technology. Improved safety systems. Off-road capable new trim level. These are all things fans and enthusiasts of Toyota RAV4 have been asking about for years. 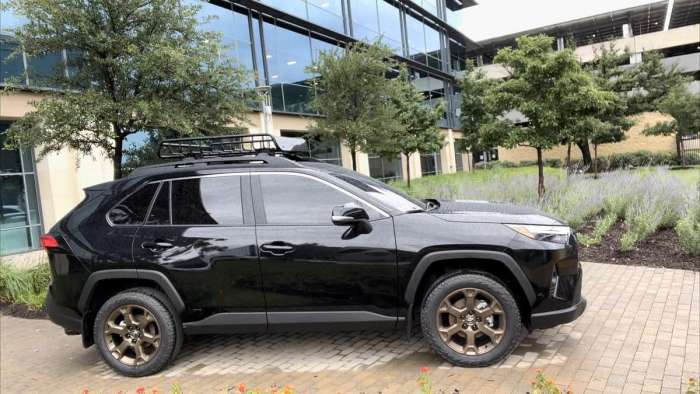 The top-selling SUV in the country is getting important updates and additions. Key changes that will give drivers more capabilities, connectivity, and peace of mind.

RAV4 TSS 2.5 can alert you if it detects vehicles or pedestrians while you are making a turn at intersections. Also, your RAV4 and RAV4 Hybrid can stabilize your evasive steering maneuvers to help prevent lane departure if it senses potential obstacles in your path.

I have received many emails and comments from viewers of my “ToyotaJeff Reviews” YouTube channel asking when Toyota will upgrade Toyota Safety Sense and multimedia systems for RAV4.

People should be pleased.

You may have already seen this state-of-the-art system in the latest next-gen Tundra and Sequoia. You will also now find it in popular Toyota models like Venza and Highlander as well.

Toyota Audio Multimedia provides more music, phone, text, navigation, and vehicle information than ever before. Graphics and functions are extremely user-friendly and easy to understand and learn.

To me the biggest benefits are wireless Apple CarPlay and wireless Android Auto, along with the ability to simultaneously pair two phones at the same time.

Multi-information displays will be offered in 7-inch or 12.3-inch sizes.

My “ToyotaJeff Reviews” YouTube video gives more detail, but here are the highlights.

RAV4 Hybrid Woodland Edition features TRD-tuned suspension, which will smooth out bumps on the trails and give smooth ride comfort on the road.

Fuel efficiency numbers have not been released yet, but I would expect figures to be similar to the 40mpg combined (some drivers are getting better mpg) seen in other RAV4 Hybrid trim levels.

Time for Your Toyota RAV4 Comments

What experience do you have with either Toyota RAV4 or RAV4 Hybrid? How is your gas economy?

Are you interested in any of the upgrades coming to 2023 RAV4? Will this help you decide if you want to buy one or not?

Is 2023 RAV4 Hybrid Woodland Edition for you?

Barbara Green wrote on June 26, 2022 - 4:16pm Permalink
I enjoy watching and watching your videos is running about Toyota but I have lost respect in Rava4’s. Add a 2015 RAV4 with less than 48,000 miles on it had it for only 4 months before the battery caught on fire why was driving on I 15 in Victorville California. It’s a Toyota place and they did nothing Toyota Corporation did nothing even though they knew 2013 to 2017 RAV4‘s had a tendency of catching batteries on fire. So I don’t know if I’ll ever go back to bed by Natasha Yoda I’ve had for Toyota two cameras to Highlander’s my kids have had them but now I’ve almost always trust in them in their cars and they deathly don’t have customer service
Rod Woolley wrote on June 28, 2022 - 9:20am Permalink
I have a 2019 RAV 4 hybrid. It is a great car in many respects and I really like it. However, it has a weakness in relation to its steering. It is hard to describe, but is best summarised by saying the car “lacks a sense of direction” and I find I can never fully relax my attention for fear of drifting off-course. The problem is not really noticeable at speeds less than 60 kph on trips around town. It is far more evident at higher speeds particularly in windy conditions or on a bumpy road. I find I have to be very careful not to over correct the steering and to hold the steering in a fixed position. Sometimes the car wants to drift left slightly and sometimes right. It feels like there is not enough castor angle designed into the steering. I wonder if the car’s structure is stiff enough, or whether the steering ratio is set a little too high or whether it is a characteristic inherent in electric steering systems. I have experienced a similar feeling about a couple of friend’s Camrys when driving them, but I never experienced the problem with an older Corolla. I hasten to add that there is no “slop” or dead-band in the steering, and my tyres are new and properly inflated. i would rate this car ten out of ten were it not for this problem in its design.
Steve wrote on July 2, 2022 - 7:38pm Permalink
No disrespect to your experience. I just want to point out that I have the exact same vehicle and have never had anything remotely like the experience you described. I’ve had zero problems with my steering or handling since day one. Maybe yours has a bad set up in some way?
Paul Rivers wrote on July 21, 2022 - 9:05pm Permalink
I rented a rav4 thinking of buying one, didn't because I had the same issue. There's something really "off" about steering. The only thing I can compare it to is like comparing it to driving a semi-truck - it's heavy when it should be light, light when it should be heavy, and I feel completely detached from the road. And I'm no over-enthusiast, my car for years has been a prius which handles very normally and fine.
Peter Jordan wrote on June 30, 2022 - 10:16pm Permalink
Jeff...will the RAV4 have a redesign for 2024? The current styling is growing old. Too masculine as well. If a redesigned looks like a Venza more females would purchase.
Al Goody wrote on July 6, 2022 - 9:44am Permalink
I have owned 4 Rav4's, the last 2 are hybrids a 2018 & 2021. With the 2018 I got 28mpg the 2021 gets 39mpg. I find you can't compare the two. The ride is much better on the 2021. The only complaint with the 2021 is the lane assist. I had to turn it off because I had to fight with it to steer the car. Lane markings are not always visible or faded & my idea of staying in center of lane is different from the cars computer.
B. Fischer wrote on July 8, 2022 - 7:41pm Permalink
Does the new 2023 RAV4 line have spare tires, "donut" tires and a jack or an inflatable unit as standard equipment? Don't care much about badging and floor matts when I'm stuck out-in-the-boonies with a flat tire! Would like to see a full-size spare and jack in every trim level.
Mengistu Sida wrote on July 10, 2022 - 7:44am Permalink
I'm interested to buy a Plug-In -Hybrid RAV4. But there is no mention of this model for the coming year in your update. Thanks!
kristi cochran wrote on July 25, 2022 - 3:53pm Permalink
Will the 2023 Woodland edition and/or other models come in the Lunar Rock color? When will they be available to order? If I order a 2022 now, they say it will be 6-9 months to come in for the same color, but that seems to be overlapping when the 2023 will be out. Should I wait?