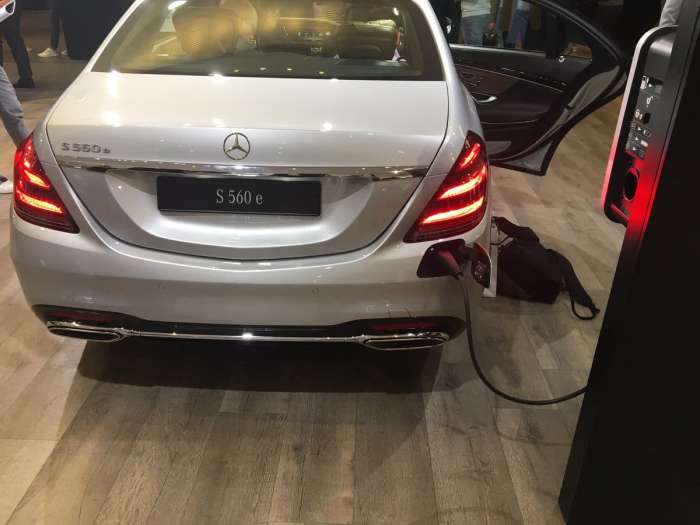 Mercedes Benz's PHEV move is disappointing, but why do carmakers insist on PHEVs? There are three reasons for it.
Advertisement

Mercedes Benz recently announced it is pulling the plug on its entire present PHEV lineup to replace it with longer range PHEVs. I actually find this disappointing. Here is why.

Beverly Hills is banning them from public charging stations at risk for a fine.
The UK has put them on that list of banned polluting cars by 2040.
They are being banned from HOV lanes, and preferential treatment like special EV parking lots everywhere!
In the end PHEVs will be remembered as the EV that goes back to dirtying, after mile 30ing!

What Mercedes Benz and other car makers need to do is pull the plug on their entire PHEV lineups period, and replace them with a full line of battery electric vehicles called BEVs. But like most car makers they’re hesitant to do this for a variety of reasons which adds not abates the problem. Unfortunately you will soon see the end result of this decision in just a few years when you’re waiting at a charging station with your BEV while someone with a PHEV who doesn’t need to recharge as urgently as you do, is in front of you. Let me explain what I mean.

PHEVs are what we commonly refer to as plugin hybrids. Mercedes creating a longer range PHEV hybrid only prolongs an inevitable problem by kicking the can down the road. With the current progression of battery technology, the only exception I can see for a PHEV now, is for a camper or SUV for off grid living. In fact a PHEV is perfect for that scenario. But a PHEV hybrid system is not needed any longer in an ordinary passenger car for daily road driving. That’s it.

And let me be clear, I’m talking about the PHEV hybrid you plug into a charging station, not any other, like a regenerative HEV. HEVs are a different segment for another post. Remember this rule of thumb with PHEVs: the tinier the battery the more frequent the required trips to the charging station if you want to keep your fuel costs low.

A segment created by GM with the first PHEV, the Chevy #Volt almost 10 years ago, was recently sent to committee for cancellation by them-PHEVs like the Volt are not needed anymore. GM even said so as their reason for possibly cancelling the Volt that’s under review. We are now ready for all out full electric cars called BEVs, battery operated electric vehicles.

The sooner manufacturers get rid of them (PHEVs) the shorter the lines will be at charging stations in the next 3-5 years. PHEVs even with longer ranges cannot still compete with BEVs. Like a tiny bladder at a bathroom, PHEVs require more trips to a charging station. And trust me, you’ll thank the manufacturers for getting rid of them finally in the soon coming future when you pull into a charging station with your BEV to see someone with an old Volt, Prius, or Lincoln Aviator charging their paltry 35-50 mile battery with a long line behind them when they can drive their car on gas. It’s already causing resentment! This experience will intensify nationwide if we don’t get rid of PHEVs (and frankly start building charging stations much faster) ASAP. The sooner the better.

Why are car manufacturers kicking this can down the road by insisting on making some kind of PHEV?

1. They’re afraid: they’re not sure their customers are truly ready for electrification, especially the North American market. Unlike Asia and Europe, we Americans are not building charging stations fast enough because we are continuing to get over our denial about things like climate change, our fear and hesitance about electric cars, and fear or uncertainty about the upcoming EV and AV proliferation.

2. They’re listening to their North American dealers: this is the same reason car dealers are trying to steer you away recently from buying an electric car. I’m reading all kinds of recent car dealer horror stories online. Be prepared: some them shamefully and/or falsely are unfamiliar with their electric products. Also their service department isn’t going to make much money on repairs with electric cars as they do with gas and hybrid cars. A car with 2 propulsion systems means double the money especially out of warranty.

3. Car makers are cheap. They’re waiting for Washington to spend money on charging stations and visa versa for Washington with the car makers. And frankly, we like to give tax breaks but we don’t like to spend money on infrastructure like the Chinese and Europeans do. That’s why our roads are crap. Everyone’s expecting the manufacturers to follow the Tesla model of charging stations to build them on their own, but there’s a reason why a Model S And X cost around $100,000. They include free charging. Not all consumers can afford electric cars like that.

BEVs with longer ranges and more home charging means less cars at public and refueling charging stations! Like the gasoline car whose time will soon come to an end, time has already past for the hybrid. Instead we insist on clinging to both. Let’s start pulling plugs on PHEVs.

REPORTER’S EDIT 7/10/18: An earlier version of this report indicated that the Chevy Volt was cancelled by GM. That’s not entirely accurate, the car has been put on review to committee for cancellation. And in that regard that it is under review, there’s a good chance it will be cancelled. I’d like to thank my loyal reader Dean for enabling me to correct this fact. Thanks Dean!