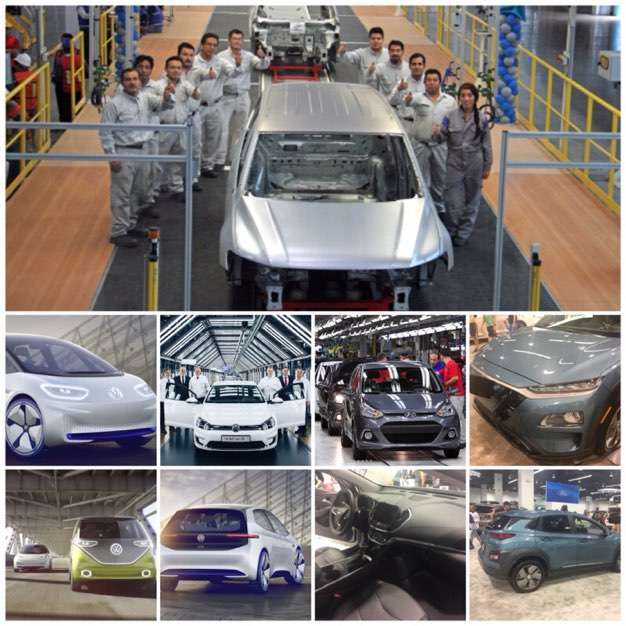 The Mass Incursion of BEV’s Begins! Hyundai Imports “Production Hell” onto the Pacific, While VW Gets Ready for Theirs onto the Atlantic

D Day Reversed! As Tesla prepares for Cheap Model 3 “Production Hell,” the competition takes a Last Stand: Hyundai is ready to unleash a manufacturing fury of a “Production Hell,” with Kona to invade America via the Pacific. While VW and Ford sign a war pact treaty to enact their diabolical anti-Tesla master plan to unleash triple flanking fury coming soon from Dearborn, Chattanooga, and from the North Atlantic shores.
Advertisement

It seems like the planning of D Day in reverse, maybe industrial revenge, as two major foreign auto makers, Hyundai Motor Group and VW Group have separately and recently made moves to put themselves in positions of unleashing a furious manufacturing flurry of electric cars across North America in as little as a few weeks. VW ends merger rumors to shore up its alliance with Ford Motor Company with a firm agreement to collaborate building commercial vehicles together, and to share electrical technology. Hyundai Motors meanwhile is ramping up its popular Kona electric with a 258 mile range to whip across America via the Pacific shores. As Hyundai cars go to driveways as early this winter, VW begins its wrath early next year to have their cars in driveways as early by the end of 2019:

What’s Going On Here Between Hyundai and VW:

While not collaborated bi-coastal, each maker has an effort coordinated on each shore by its master planners; plans to unleash a saturation of electric cars by foreign auto makers at such a furious pace, that neither the legacy makers or Tesla has the resources, supply chains, financing, production capacity, or preparedness as these makers do, to leave their mark on the North American electric car market. By the time one maker is finished by the end of next year 2019 setting up dealers and driveways with adequate supplies of Hyundai Konas from the Pacific shores, the other will just be ready to unleash their fury to saturate the other side of the market with Volkswagens starting in 2020 onto the shores of the Atlantic. And in VW’s case a little help from their factory in Chattanooga and from their new war pact partners at Ford who’ll both add the finishing touches.

Both cars both manufacturing giants are using are undercutting into either Tesla’s price point or their market, of producing a mainstream BEV product American families can more afford. In the case of the Hyundai Kona, its MSRP for the North American market will sit around the same price point as Tesla’s economy model Tesla targets at $35,000 for a sedan. Hyundai’s is an SUV. VW is going for the throat with a subtle marketing message by revealing an industrial plan that nobody can do economy better than VW can, they’re the king of all that: an electric hatchback utility BEV starting at $21,000 USD before incentives.

In their press conference last week after a board meeting, CEO Herbert Diess laid an BEV landscape in which he saw the economics of consumers having compelling reasons to go electric by 2020, and few reasons not to: “For those who drive less than 30,000 kilometers a year, electric will be their first choice,” he said. As far as using Chattanooga, Thomas Ulbrich, the VW brand's head of electric cars, told reporters in Zwickau, Germany, that talks are ongoing with a final decision expected in a few weeks.

So as Tesla ramps up to sell whatever economy version of Model 3 they can through the winter, those efforts will eventually be mitigated with what both Hyundai and most especially VW and Ford have planned for Tesla, in the coming next two years. This story is not finished. Torque News coverage of this industrial war between the auto makers at year six of the Electric Car Revolution continues.

All images taken from VW Group and Hyundai Motor Group Media or Pressroom with the exception of Hyundai Kona, by Al Castro

What do you think of the double invasion? Let’s us know below!