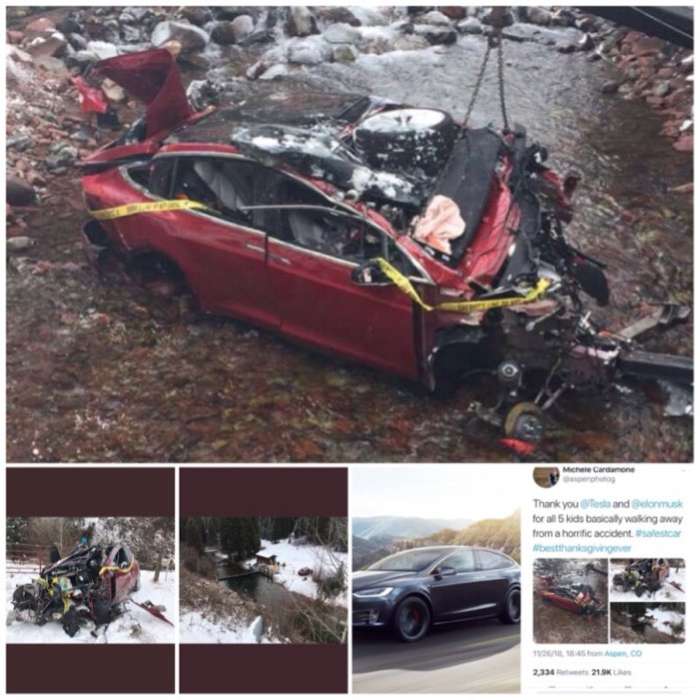 Traditional and conventional engineering wisdom dictated for years that the purpose of a Mercedes Benz was to enable you to withstand a crash, so that you can survive to buy another Mercedes. Perhaps that conventional thinking now also applies to a Tesla. Five kids driving and riding in a high speed Tesla crash their Model X into a tree and creek. The car was destroyed. Fatalities: 0. The hero: the Tesla.
Advertisement

It looks like five teenagers will be alive to have turkey, ham, and/or lamb for the holiday, to gather round the table with family and friends to tell the tale of the Model X that crashed into a tree then into a creek. And how they all lived to tell the story there and then. Earlier this month five teenagers in a red Tesla Model X driven by an 18 year old was apparently driving at a high rate of speed to miss a curve to swerve off the roadway onto a steep declining embankment ravine which sent the CUV 100 feet mid-air and crashing into a Colorado creek way down from the roadway. Recently one of the pictures on social media showed the wreckage in which all five teens survived. The vehicle appears to be an insurance total loss. And it looks like all five will be okay for a happier and more thankful holiday, thanks to the Tesla, that apparently will be sacrificed to be parts-salvaged then crushed, to go to that great EV parking space in the sky for eternal recharging, knowing it was a hero.

According to the Aspen Times about three weeks ago, five teens swerved off a local Colorado road over a steep declining 20 foot ravine and crashed a late model Tesla Model X into a creek, destroying the car, but saving the five teens. Although reported then by the Times, the reason the incident is now coming to light is because of the pictures recently posted on Twitter that went viral:

Thank you @Tesla and @elonmusk for all 5 kids basically walking away from a horrific accident. #safestcar #bestthanksgivingever pic.twitter.com/SSQuIagvXq

According to the Times, Trooper Gary Cutler, a CSP spokesman, says they received the call on the evening of Wednesday, November 7, 2018 at 7:55 pm local time. He says the 18 year old man who was driving the vehicle, and for unknown reasons missed a curve, swerved off the right side of the road and became airborne, hitting a large tree, then the car rolled into Maroon creek where the car rested, apparently upright, but with all sides damaged. Cutler said the driver was taken to Aspen Valley Hospital as he suffered serious injuries and an 18 year old female passenger was taken to intensive care as she suffered life threatening injuries with broken ribs and an arm, with a brain hemorrhage. Her mother later posted on social media, “All OK.”

Another 18 year old female suffered moderate injuries, another 18 year old man was seriously injured, and a 17 year old man escaped with minor injuries. Although the Times reported one of the injured passengers may have been flown medi-vac’d to another area hospital, Trooper Cutler stated all were taken to AVH.

Jesse Deane is a local resident who reached the crash shortly after it happened said three of the five occupants were already back up on the road walking around, and by the time he got down to the creek, two were still inside the car, but all were conscious: “we wanted to make sure everyone was safe and stable.” Deane, according to the Times, praised the safety features of the electric BEV SUV Model X by Tesla: “They were extremely fortunate. For all intents and purposes, it flew 100 feet before landing.”

The Times reports James Gordon, at the crash scene that Wednesday as saying, “I can’t believe these kids walked away from this, trees usually win.”

It was not known if the driver will face any charges in connection with the crash. It appears to be just an accident without the experience of realizing speed relative to control of a vehicle, something the youthful driver can contemplate as he sits down with his family this holiday season, to be grateful all are alive to tell the story, and that he had good fortune and fate that they were inside a Tesla, and not just any other vehicle.

There are only two confirmed fatalities in a Tesla Model X, both apparently while engaged in AutoPilot, both controversial. The most recent was on March 23, 2018 when Wei Huang apparently had his AutoPilot feature activated when his Model X slammed into a highway concrete divider, sending him to the hospital where he died died later. According to Tesla, Huang should have had about five seconds, and 150 meters of unobstructed view of the concrete barrier, before the crash. Huang’s hands were not detected on the wheel for six seconds prior to the impact. Earlier in the drive, he had been given multiple visual warnings and one audible warning to put his hands back on the wheel. The AutoPilot controversy, which appears to have nothing to do with this incident in Colorado, continues.

The hero itself of this story, however, debuted at the Tesla Design Studio in Hawthorne, CA in 2012, as the Tesla Model X is the SUV/CUV variant of its flagship vehicle, the Model S, in which it shares 30% of its parts, and has been in production since 2015. Its controversy is usually when it’s AutoPilot feature is engaged. As of September 2018 Tesla has sold nearly 107,000 units of the car worldwide. In 2017 the National Highway Traffic Safety Administration gave the already storied car a highest 5 star crash rating in all assessed categories. Tesla attributes these ratings to its now industry de rigueur battery tray platform, and the vehicle’s low center of gravity.

The low center of gravity is an attribute that prevents the car from flipping over in a high speed engagement as this video shows with a Model 3, similarly designed, as reported recently was tested by the driver who almost lost control at 137 mph at the Bonneville Flats:

As for the now Legendary T-Lazy Ranch Model X, the viral tweet summed it all: “Thank you @Tesla and @ElonMusk for all 5 kids basically walking away from a horrific accident. #safestcar #bestthanksgivingever”

All photos are from Twitter except Tesla Model X from Tesla Media.

What do you think of the T-Lazy Ranch Model X? Let us know below!