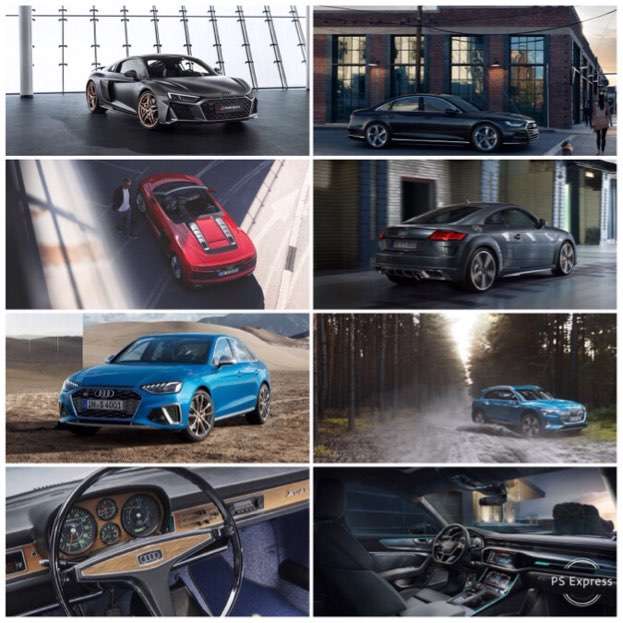 Off to the Electric Chair! Unlike other legacy car companies with their so called 5 and 10 year plans toward electrification, this is how I know VW Group is pretty damn serious about meaning what it says about an electric future. Its lead luxury brand Audi plans on electrifying or eliminating some of its iconic signature vehicles way sooner, and in doing so, it’ll send a shakeup message to the luxury car market that electric cars are now the new marque to be judged.
Advertisement

ANALYSIS: Other car companies are starting to compose their gasoline swansongs, but it is the dawn of a new era for VW Group’s lead luxury brand Audi, when they announce some of their signature vehicles are on the chopping block for electrification and much sooner than anticipated by either 2023 or 2025, depending on the vehicle. We’ve been so focused on e-Tron and its variants, it seems we forgot about the rest of the portfolio. Gone from gas stations soon forever will be hallmark new Audis, like the bread and butter A4, the mini stylistic sports car coupe the award winning TT, even the flagship saloon the A8 may see sooner electrification, and gone forever with no gas replacement foreseen, might possibly be the halo R8. Could the next R8 be a Roadster 2 racer matchup?

“We’re shedding old baggage,” Chief Financial Officer Alexander Seitz said. Because of tighter emissions regulations, “combustion cars are getting more expensive in the medium-term, and electric cars are getting cheaper.”

When you hear that Audi is contemplating cancelling cars like the TT, R8, A8, and A4 to give many Audi fans heart attacks, you know Audi means serious business with electrification, and in such a short time period. These cars as we once knew then will be soon gone forever, maybe not by name, but by the driving dynamic we once knew them to have. This is serious business and big news in the auto industry.

But let’s not fool ourselves by the same token. We knew this day was a long time coming, to be fair to ourselves, we didn’t realize it would come up on us so quickly like it’s doing right now.

All Part of the Plan

But in a way this all makes sense. Over the past year, VW Group has been a in frenzy of revamping and retooling factories around the world to have gasoline vehicle production take a backdrop and battery electrics become the forefront. They’ve been opening and expanding battery manufacturing plants globally. They’ve switched supply chains which make BEVs way less labor intensive and less expensive to make, and gas and hybrids much harder to assemble and more expensive to sell. As part of the Dieselgate settlement they spent the past year installing a whole new public supercharging infrastructure across the US continent, but by the same token, its now catered to VW vehicles, so they should be very eager to take advantage of it by having all kinds of electric Passats, Atlases, Panameras, Taycans, Continentals and Spurs, Mulsannes, Aventadors, A6s and A8s pull up and charge. Don’t forget the soon coming ID BUZZ Microbus and ROOMZ, the CUV Tesla X matchup..

A faster coming electric Audi mostly definitely means a more faster coming electric Porsche, Lambo, and Bentley too. As the largest car company in the world by output of 10.8 million vehicles, and sales volume, next year as the largest producer of electric vehicles worldwide beating BYD and Tesla combined, VW Group with its 122 output facilites globally that produces around 200 models under 12 different brands, intends to have an electric version for each gas vehicle it makes and sells, to have the electric one replace it. That target is now well underway.

Fairly recently I posted on social media about how the upcoming 2021 W223 Mercedes Benz S Class might be the last Daimler gas based flagship of the Mercedes line. Remember, the W126 S Class from 1979–1992 ran for 13 years with steady improvements. Who’s to say Mercedes might do the same with W223. Recently Daimler announced that 2039 will be the cut off year when they cease all gasoline vehicle production. Now of course that’s 20 years from now, but the market is moving so quickly like it is, with this news with Audi and the A8, with Jaguar XJ already sent to the electric chair, with Audi A8 also soon off to the Electric Tower of London, it seems that the Daimler Queen of the Roads may have her chopping block time like her predecessor, Ann Boleyn once did, much sooner than later, in an electric kind of way.

Photos originally all come from VW Group’s 12 branded websites. Regardless, they are all published here and all under Section 107 of the Copyright Act 1976, allowance is made for "fair use" for purposes such as criticism, comment, and news reporting.

UPDATED NOTICE: I am so grateful that my publisher allows me the generous privilege within reason to express my opinions about matters related to the auto industry. I try to be judicious and respectful about the content. I ask you do the same in the comments section by refraining from inappropriate language and content. Please be nice, there’s no reason to get nasty, this is only about cars. The irony is if you came up on me on the street to recognize me I’d grab a beer or coffee with you and we’d talk about cars for me to thank you for being a reader!

And please keep in mind that the opinions expressed here are solely mine, and not those of Hareyan Publishing or its employees, including my staff colleagues.

What do you think of Al’s crazy ideas on Audi? Al truly is full of himself ain’t he? Please let us know below so we can finally fire him!