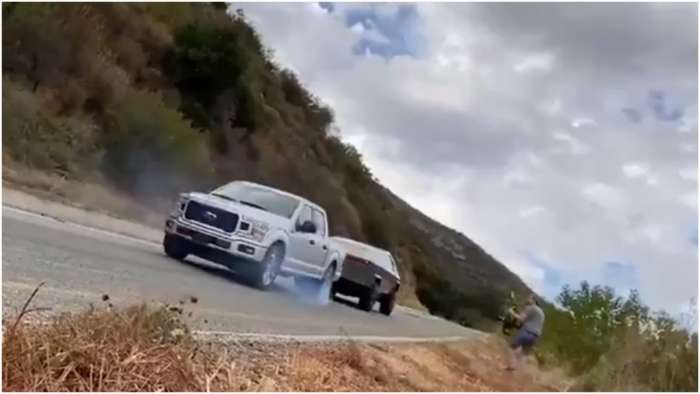 Cybertruck comparison against the Ford F150 and Porsche 911

I think that it is funny when people talk about the F150 truck pull demonstration being an unfair comparison. This was an introduction of the Tesla Cybertruck, not a truck pull competition. The demonstration was not made to definitively demonstrate that the Cybertruck can out-pull any gas or diesel powered pickup truck out there. It was meant to show that an electric truck is tough, powerful, durable and capable.

Not the best examples of these vehicles to compare?

They could have used a Ford F-350 Super Duty Dually powered by the PowerStroke diesel engine, and similarly they could have used a Porsche GT2 RS for the drag race comparison. But the point is not that it is the best performing truck in every area against every vehicle built, the point is that the Cybertruck is more than capable against gas-powered vehicles in it's price range.

Who wants EVs to fail?

It is important to keep in mind that there are powerful interests who want to keep electric cars a tiny niche market. And they have carefully promoted the ideas that EVs are weak, slow, golf carts, or eco-boxes that easily catch fire, and run out of power after a couple miles of use. And so far the new vehicle sales of EVs across the country are still under 3%. Meaning that 97% of the driving and buying public needs to understand that EVs are more than capable of competing against gas/diesel powered vehicles. There were around 3 million trucks sold in the U.S. last year, and the average price was around $48K.

Did the demos work?

Even though Musk's Cybertruck demonstration was flawed, and the styling is controversial, they have been able to secure over a 1/4 million (250,000+) reservations over the past few days for the Cybertruck, including much of middle America who wouldn't have looked twice at an electric vehicle before. So overall the comparative demonstrations were a success. This truck pull contest highlighted the advantages of AWD and EV motor’s instant torque.

Sunny Madra, the vice president of Ford's X venture incubator initially tweeted an invitation for Tesla to bring the Cybertruck out for a rematch against a more formidable Ford truck. Elon’s response was simply “Bring it on!” But Ford quickly back-peddled, issuing the following response…"Sunny’s tweet was tongue in cheek to point out the absurdity of Tesla’s video, nothing more.” Ford’s refusal of a rematch showed that they figured that they might not even win with a AWD, turbo diesel, dually pickup with a load in it's bed. And it showed that despite the Ford prototype EV F150 train pulling demo, that their next EV F150 coming out will only be a plug-in hybrid, and that their full EV F150 is still many years away from being built. Granted, the Cybertruck was just a prototype as well and it's production is also years off, but with this initially strong rush of reservations Tesla might actually accelerate the production of the Cybertruck, just as they are accelerating the release of the Model Y now.

Online comparisons get people’s attention and bring about change

As a supporter of EVs I am very happy to see these comparisons because I believe that the announcement of the Model Y pushed Ford into building the Mach-E, and now after Ford Unveiled their future BEV crossover with much praise, their planned Mach-E production capacity has them sold out for the first year. And that flies in the face of naysayers who say that EVs are not capable of competing equally against ICE (internal combustion engine) vehicles, and that there is no real interest in EVs, beyond a tiny market of big metropolitan cities. Hopefully it will also push GM and Chrysler/FCA in accelerating their plans to build competitive electric vehicles. And also drive the European and Asian automakers to commit more resources to designing and building competitive EVs now and in the near future.

See you in my next story where I am discussing the possible cause of the Honda, Toyota and Hyundai EV delays.

Marc Stern wrote on November 29, 2019 - 8:32am Permalink
From a Ford truck aspect, I honestly doubt that they are very worried. The reason is that Ford will sell more than 1 million F150s over the next year while Elon's truck will sell maybe 200,000 over the next couple. And, remember that Elon has a great problem with slipping deliveries. So, why would Ford be worried? On another tack, Ford's F150 EV truck should be along in 2021 and they do have a prototype electric out there. If they were able to match the Tesla Cybertruck with their EV the results would be different, especially if the test is run on level ground.
DeanMcManis wrote on November 30, 2019 - 2:43am Permalink
You can say that Ford doesn't consider Tesla a threat, but the truth is that Tesla is proving that EVs are competitive, and the big automakers are dragging their feet in bringing them to market and supporting them with advertising and training support. The German automakers completely owned the performance sedan and performance crossover market before Tesla jumped in, and they now offer (or will soon offer) rival EV models. Similarly it was the sales boom of the Model 3 and introduction of the Model Y that drove Ford to (wisely) change their plans and accelerate the development of the Mach-E and F150 EV models. Even though Ford's F150 PHEV is due next year or so, but I believe that we will see the production Cybertruck before we see an EV F150 in showrooms and on the roads. I wouldn't say that Ford is worried, but it would be foolish for them to ignore Tesla's impact on the automotive market and delay the introduction of competing EV models. Ford is visibly ahead of GM, and far ahead of Dodge/FCA in terms of their EV efforts, but they are trailing Tesla currently. Not with the F150 today because the competing market is solely gas and diesel trucks, as it has been for decades, but it is clearly going to be changing over the next couple years.