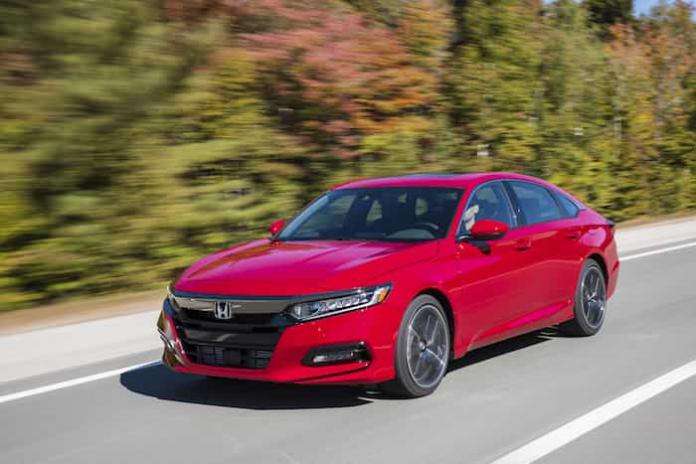 2018 Honda Accord Sport 2.0T Is No Threat to Civic Type R, But Comparison to Civic Si

Admittedly, it really can’t substitute for the Type R which is mostly about going around in a circle really, really fast. There’s no moonroof to gaze through on a starry night during a romantic drive. There are no heated seats to keep your backside toasty on a cold morning. And, the first time you hit a pothole at any speed faster than a turtle can walk, you’re probably going to have to spend $800 on a new wheel and tire. That’s assuming you can even buy a Civic Type R for anything near Honda’s suggested price of about $35,000 given the insane markups dealers have been demanding since it went on sale.

See Also: Deciding Between a Civic Si and Type R

Earlier this year, the 2017 Honda Civic Si was greeted with high praise for its great handling and capable chassis. Some Si purists, however, mourned the loss of VTEC and missed being able to rev the engine to speeds that rival those of a dentist's drill. Others are glad to see an engine that produces higher levels of lower-RPM torque that make the vehicle feel very powerful in daily driving.

Following the Si’s release was the long-awaited Civic Type R with its Nürburgring record-setting levels of performance thanks in part to its 2.0L turbocharged engine. There was hope within the Honda community that the Si would have received a downrated version of the Type R’s engine, but Honda had other plans.

Back down the performance ladder, you have the Civic Si. Yes, its engine is rated at the same 205 horsepower as the last-generation Civic, it doesn’t rev as high, and it lost that sudden power increase and change in sound when VTEC kicked in, yo. Where the Civic Si shines, however, is in its very capable chassis and smiles-per-dollar ratio. Honda tuned a little more power out of the CR-V’s 1.5L turbocharged engine and placed it inside a very capable chassis. The result is adequate - though not outstanding - acceleration, sharp handling, excellent fuel economy, and many small changes that add up to something greater than the sum of its parts.

Next up is the 2018 Honda Accord Sport 2.0T with the manual transmission. It is based on the excellent platform that underpins the Honda Civic and shares a version of the Type R’s engine that is tuned for regular fuel and economy over power. The additional weight and suspension tuning of Accord Sport 2.0T compared to the Civic Si probably won’t let it corner as fast or as flat, but what it should offer is a quiet, compliant ride with the latest safety features.

For starters, the MSRP of the 2018 Accord Sport 2.0T including destination is $31,185. The MSRP of the 2018 Honda Civic Si sedan starts at $24.975. Although the Accord has a larger, more powerful engine, this increase is offset somewhat by it’s added weight of about 300 lbs. I expect the difference to be more noticeable during instrumented testing than daily driving. Although the EPA fuel economy estimates had not yet been released for the Accord as of the writing of this article, they’ll certainly be lower than the Civic’s ratings of 28 city, 38 highway, and 32 combined due to the Accord’s larger engine and added weight.

The Accord is slightly better equipped overall - mostly when it comes to safety. For 2018, Honda Sensing is standard on all Accords - including those equipped with the manual transmission. The Accord Sport 2.0T also adds LED low-beam headlights, LED fog lights, automatic high beams, and a power driver’s seat over the Civic Si.

What the Accord lacks, however, is the Civic Si’s Adaptive Damper System and one very important feature - the helical limited-slip differential - which is very useful for traction, handling, and for reducing torque steer. Even the Civic Si’s 1.5L turbocharged engine will easily spin both front tires all the way through first and part of second gear on dry pavement. I certainly don’t expect the situation to improve with the Accord’s 40% higher engine torque and open differential.

Even after four months behind the wheel of a 2017 Civic Si sedan, I remain impressed with its handling and find the power more than adequate for daily driving. The suspension is firm, yet comfortable enough for long trips. When I stop and consider that this car costs less than $25,000, I’m even more impressed.

While I think it’s pretty obvious the Accord Sport 2.0T poses no threat to the Civic Type R, I do believe it should be compared with the Civic Si before a final decision is made. If you’re leaning on the side of luxury and prefer a slightly larger car, the Accord Sport 2.0T deserves your attention. However, the Civic Si has a lot to offer for $6,210 less. I feel that the gap between these two vehicles is narrower than the width of the price difference and would suggest evaluating both vehicles along with your needs before signing on the dotted line.

Tommy Haupfear wrote on August 21, 2019 - 3:10pm Permalink
What a bunk article and clearly biased towards the Civic. The rear seat leg room in a Civic is a joke and the Accord's torque is just incredible. Of course the Civic wins in handling but the motor is just uninspiring.

LG's New EV Battery Plant Is a Welcome News for Tesla
Tesla Giga Berlin's New Hurdle: It's Not Only the Gov't, but Now Tesla Itself
END_OF_DOCUMENT_TOKEN_TO_BE_REPLACED