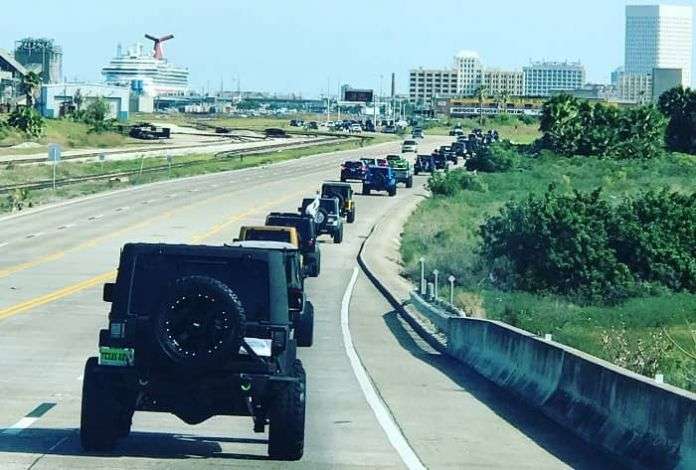 Jeepers are an interesting bunch. You've seen them. Rolling down the street or highway in a caravan or convoy (my friends prefer the term Jeep-a-van) while the passengers in the cars passing by wish it was them. There could be a few or hundreds. Just today I was in a group of almost 200 going on the annual Suds Run to benefit the Ronald McDonald House in Galveston, Texas put on by my great friend Penny Peggy Pam.
Advertisement

One could liken Jeep Wrangler owners to those groups of people who have something in common: lots of energy. Loads and loads of energy. That energy is put to good use.

Jeep Wrangler Owners Give Themselves

You see, Jeepers are a different breed. Most aren't rich, they own Jeep Wranglers (2018 Wrangler debuts online). Most who modify their ride do it a piece at a time as they can afford the next part. But that doesn't stop them from giving. And give they do! A lot of these guys are quite handy with a wrench and so when it comes to turning a wrench they are eager to help. For instance, the lift I put on my 2012 Wrangler JKU. My two buddies Mike and Jason offered their help and we made a day of it. Including the best fried catfish I've ever had! Putting the lift on was a cinch when you have a couple extra hands especially ones who have done it before. My cost? Nothing. I saved a couple thousand dollars because two of my friends knew what it means to be a true Jeeper.

They Give Their Money

But it isn't just that. These Jeepers somehow manage between the Jeeps they own and the responsibilities they have to give back to the communities they are a part of. Like today and the Suds Run. These almost 200 people donated 6700 pounds of laundry detergent and over $13,000 in money to help their fellow man. People they have never met. The benefit... to help those families who are dealing with a child suffering from a terminal or severe medical problem be able to feel human with a clean change of clothes while all their time is focused on that of their dying child.

Somewhere between the lift kits, bumpers, lights, winches, and every other modification you can think of, they are digging deep in their pockets to help. I've seen hundreds of Jeepers on charity runs benefiting major events like breast cancer awareness/Susan B. Komen, Saafe House battered women's shelter, pet food and adoption, the groups who's passion it is to go and recover people who have gotten their vehicles stuck in one way or another (S.O.R.T.), and the biggest I have seen, Jeepers spending DAYS evacuating victims from Hurricane Harvey where they were sleeping in their Jeeps, providing meals, giving rides, and traversing high water to make rescues. I have even have a couple friends who left their dry homes to go help others and several days later they get home only to find their home was also destroyed by flooding. Now that is a selfless act! Not a dime was given to these amazing people, nor would they take it. It wasn't about that. They were given this gift so they gave of themselves. They did it because it was right. They did it because it was their responsibility. I call it loving their neighbor as themself.

Those who have been given much, much will be expected. I can't tell you how many times I have had someone help me add some modification or other to my Jeep. My lift, tires and rims, bumpers, lights, wiring, winch, disconnects, CB, etc. And everyone who had helped me (all different) I asked what I owed them. Their answer was something like, "nothing, just help someone else when they need it". With the exception of an actual shop, I don't think they could take money. I can't. It's just feels... wrong.

Also see: Both The Excitement and Skepticism of The New 2018 Jeep Wrangler

Why Some People Don't Get It

Not everyone can be a Jeeper though. It takes a special breed. Read my previous article on the two types of Jeep owners to see what I mean. But it is funny the looks we get from those who don't understand it. Those who can't feel it. See, Jeepers don't do things small. That's why you see a few hundred Jeeps rolling down the highway going to a charity event. Anyone can give and that is great. But a true Jeeper gives and let's their Jeep be the icon. It's about the charity, it's about showing off their Jeep, but the Jeepers know it isn't about them. They know it is something bigger.

Don't Miss: The Jeeps and Their Owners Who Everyone Forgets: The Unsung Jeepers

Tell me your story. I want to read your comments. Did you rescue or get rescued during Harvey? Post it below in the comments section for discussion. How have you helped or been given help? What did they want in return?