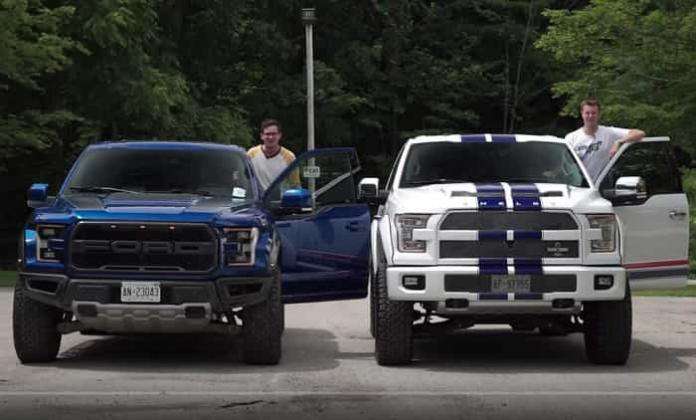 Shelby has made its own version to Ford's off-road flagship truck the Raptor. Shelby’s mad creation does not rely on the Raptor however, it is instead based on the F150 Lariat. Don’t let that be a deterrent though, it’s got some pretty big numbers to throw around.
Advertisement

The Shelby comes with a set of classic racing stripes down the truck but otherwise the only dead giveaway that it’s not just a normal F150, besides the sheer number of Shelby badges is brandishes, and it’s massive, functional, hood scoop feeding the supercharger. The Fox lift, tuned by Shelby, and flares could easily be added to any F150 so it’s not actually truly and eye-catching feature if you don’t know what you’re looking at. The Shelby does come with one quite odd feature, a carpeted bed, guess they don’t expect anyone to really be using it as a pickup truck do they.

One of the few major drawbacks to the Shelby is that it does not come with the same transmission as the new raptor but merely a standard 6-speed automatic, which does have an impact on MPG’s but then again so does 700 HP.

The Raptor does have a few things that make up for the power disparity between the two. The 10-speed transmission is a serious upgrade and on top of it, the Raptor also comes with paddle shifters to allow for more user input and control over the shift points of the automatic transmission, and even if it never gets used it’s still a unique feature to have in a truck as opposed to the more typical employer of supercars.

The other major advantage the Raptor has is Raptor Status, a slew of electronic monitors and gadgets the truck take full advantage of when out into the different available driving modes. These modes also help compensate for one of the biggest complaints among testers and drivers, the turbo lag.

Overall if you ever want to take your truck off road the Raptor seems the obvious choice. And if you don’t want to deal with the hassle of sending your truck to Shelby of finding an authorized Ford Shelby dealer, any Ford dealership will have or can get a Raptor. If you want a shiny, beautiful truck that you can race off the light and burn unsuspecting sports car drivers then the Shelby is for you, not many people expect a lifted pickup truck to bolt off the light like a race horse.

If you just read this whole article and thought to yourself; sure, they’re both awesome, but I want a Raptor and a Shelby combined, well you’re in luck. Shelby will be producing a very limited number, below 150, 2017 Shelby tuned Raptor’s. These trucks look unbelievably aggressive, with armor bumpers, a chase rack and larger tires. Even nicer, fully adjustable, Fox suspension and this version will feature the twin turbo V6 with a little extra power coming in around 525 HP.