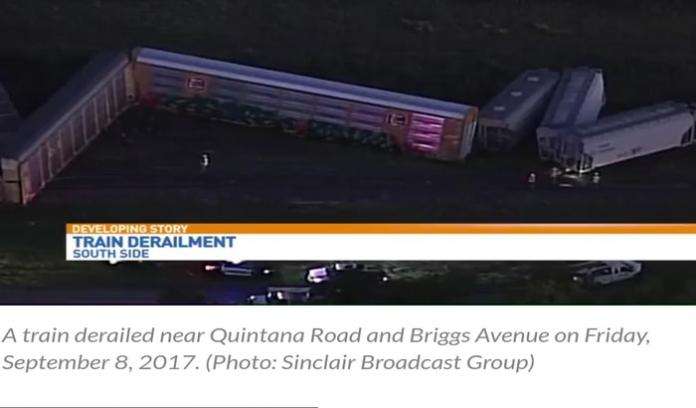 The clean-up continues this afternoon, where a freight train transporting Toyota Tundras and Tacomas derailed on the South Side of San Antonio early Friday morning, causing a power outage for hundreds of people in the area.
Advertisement

The incident happened around 5 a.m. at Briggs Avenue and Quintana Road. The San Antonio Fire Department and San Antonio Police department showed up with a Hazmat crew and several trucks, which is standard procedure for a train derailment. None of the train cars were carrying hazardous material and no injuries were reported.

Rail yard workers were “pushing” or “shoving” between 10 to 12 train cars, then trouble started with a single runaway train.

San Antonio Fire Department Battalion Chief, Russell Johnson explained, “They were shoving cars. What they call shoving cars is when they are getting ready to pull them online. They will pull them apart and then push them together and make sure they are all hooked together. Somehow it got away from them and it started rolling towards the main track. It hit the derailment track.”

About 10 cars jumped the tracks and wrecked, striking a utility pole which caused a power outage for around 6,000 businesses and homes for a duration of about 4 hours. Power was eventually restored around 9 a.m.

Spokeswoman Melissa Sparks of Toyota said there were about 40 new Toyota Tundras and Tacomas aboard the train, and it's too early to tell whether any of the trucks were damaged.

The San Antonio police estimated the wreckage could take several hours to clean up, quite possibly until late in the afternoon.

How Will These Misfortunes Affect the Toyota Truck Industry?

From the devastating floods from Hurricane Harvey, to unpredictable freight train accidents, South Texas just can’t seem to get a break. Thankfully Toyota did not encounter any damage to their manufacturing facilities from the floods, but some dealerships in Beaumont were closed and some of their new vehicles were damaged.

Also look at this story about the upcoming Toyota Tacoma and Tundra shotages.

Buyers and owners of vehicles like the Tundra and Tacoma seem to be the ones taking the biggest hits. Many people were left stranded and lost their vehicles and more in the floods, and even rescue teams who came in their trucks to relieve victims even took some major losses when the waters became too much for their truck to handle. Gas prices in the Houston area have also continued to surge, but hopefully will be able to decrease soon.

Now with Hurricane Irma ready to strike, it’s almost guaranteed that the Toyota industry’s prices of vehicles in the Southern states will begin to rise, and gas prices will remain at an ultimate high. And as these occurrences happen, America will continue to pray for all the victims of these terrible disasters.