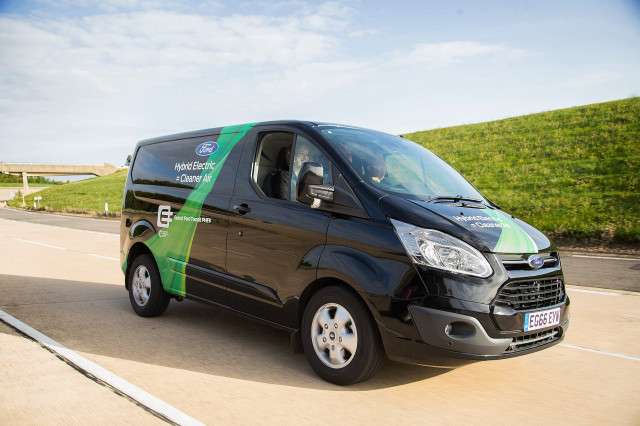 As European countries continue to crack down on emissions from road vehicles, automakers are stepping up with solutions to reduce levels of smog-causing nitrogen oxides, especially in city centers. Ford identified the commercial vehicle segment as one it believes is a prime candidate for electrification, and earlier this month it revealed its Ford Transit Plug-In Hybrid van.
Advertisement

Notably, the electrified powertrain of the Ford Transit does not use the gasoline engine to power the front wheels - ever. Instead, the lithium-ion battery pack and Bosch electric motor power the front wheels exclusively, while a 1.0-liter Ecoboost inline-3 gasoline engine works as a range extender to generate electricity that recharges the battery.

That makes it a so-called series hybrid, rather than the more common parallel hybrid used in Ford's Energi plug-in hybrid models.

Ford is quick to point out that the gasoline engine is only present to top off the battery pack, which itself will propel the Transit Plug-In Hybrid over 50 kilometers (31 miles) on a single charge on the New European Driving Cycle.

With the gasoline range extender, Ford says 500 kilometers (310 miles) is possible, while payload capacity is greater than vehicles powered by a larger and hence much heavier battery pack alone.

The automaker identified the commercial van sector as an important area to debut the new powertrain, and notes commercial vans make 280,000 trips on a typical day in London. Therefore, the goal is to reduce emission levels with the electrified Ford Transit, which creates zero emissions when operating in electric-only mode.

When the gasoline engine is active, it will generate less NOx than a van powered by a diesel engine, Ford says.

Ford officially launched the range-extended electric Transit van at the Cenex Low Carbon Vehicle 2017 event in Millbrook, U.K. It will first build 20 Transit Plug-In Hybrids as a trial fleet, which will be used by a variety of organizations and companies in London.

Additionally, the Ford Transit Plug-In Hybrids in the fleet will be equipped with telematics equipment to extract every ounce of data from the commercial vans' trips.

Ford says this is important to help understand how the vans can be used most efficiently to reduce emission levels. The vans will also be equipped with "geofencing" technology, which can modify the van's powertrain settings based on location.

For example, the technology could ensure the electric-only mode is turned on when entering a low-emission zone in a city center. London in particular now levies a charge of roughly $15 on vehicles that enter the center-city core, but zero-emission vehicles can enter free, a substantial cost savings for business.

The Ford Transit Plug-In Hybrid will enter production in 2019 following the test fleet's trial. In my opinion, perfect market for a plug in hybrid van. What do you think?

steve mackinney wrote on September 13, 2017 - 3:14pm Permalink
How quickly does it charge. What's the expected miles/kwh? Does it require a specialized charging station like Tesla or use standard outlets? Seems like options for larger battery packs for longer range would be useful.

Elon Makes a Cybertruck Statement With an Action, But Quiet in Words
Tesla's Record Month in China: Doubled Registrations in March 2021
END_OF_DOCUMENT_TOKEN_TO_BE_REPLACED