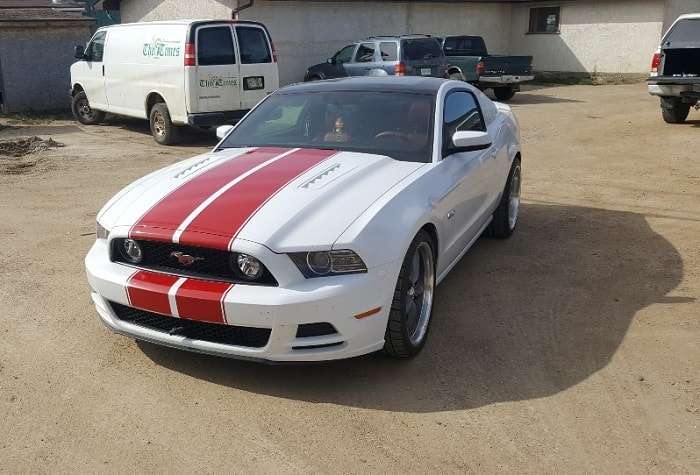 Years ago one day I was in Saskatoon, Saskatchewan, Canada for Cruise weekend in my 1987 Mustang GT. Before my friends and I went out, I went to the local Ford dealer as I always do to drool over the new model Mustangs. And to my surprise I found an Oxford White 2014 5.0.
Advertisement

I pulled beside it, admiring every detail of it loving it more and more by the second. Almost in a stereotypical salesmen fashion I saw a head pop up and instantly start walking my way. My thought was OK great here we go. He came over and said "so you like Ford Mustangs eh?" Then before I had a chance to answer he said, "I'll go get the keys."

At this point I thought there's no way my girlfriend would be OK with me buying this Mustang, but I decided I was gonna go for a drive.

As he was gone I looked inside and saw the beautiful red leather interior. Then the doors unlocked, I got in and it felt like home.

The salesman gave me the keys and said fire it up. The rumble that came from the flowmasters American thunders was not a disappointment. We went for a test drive down a highway and went to turn around.

To my surprise and shock a kid my age turned around in the same spot test driving a Chevrolet Camaro. The salesmen saw it and said he can't pass us. So we pulled up the the corner and he said give it.

I pulled off that corner and seeing that Camaro fade into a small speck in the mirror. At that point I thought this car is mine now. I had claimed it.

Later that night I brought my girlfriend to it and with utter shock she loved it and said buy it. I didn't believe it.

The next day I went back and there was a S550 Ford Mustang sitting there and I took it out for a test drive also. But the classic muscle car look wasn't there for me. I have nothing against the S550 Mustangs, but my heart was content with the S197's classic with a modern touch design.

The papers were signed and the car was mine to pick up the next weekend. I went back to the Ford dealer and picked up my car. And have loved every minute of owning the S197. They happened to have it parked next to the new Porsche 918 Spyder in a Gulf paint scheme. 44,000 dollars didn't seem like much then.

Since then I've done some mild suspension mods and other must have mods to my Ford Mustang.

The best moment of this car for me wasn't driving it. I was doing a Shelby style bumper and quad style tip set up on the car. I knew I couldn't do it by myself. I called my friend Joel to come help. Even being a Mopar man and not liking Fords, he came. He beat me to the shop we were working in. For about 3 hours we pulled the back end of the car apart then installed the new bumper with Shelby valence, followed by Corsa extreme quad style mufflers from hypermotive performance. It was a great time and we had a lot of fun and the end result did not disappoint.

The reason this moment is so special to me is because in March of this year my friend Joel passed away and it was the last time we worked on anything car related together.

Every car guy has a story behind their car, whether it's like mine with a good salesman, agreeing girlfriend or time cherished with friends. My question to you, would you be able to make the switch from the times of old to the new modern car age?