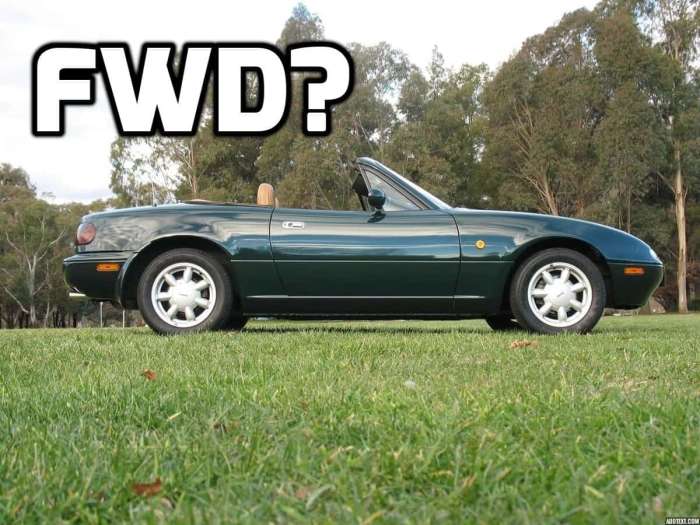 What Would the World Be Like with a Front-Wheel-Drive Miata? Worse. Much Worse.

Mazda's little roadster is a legend. What it's done for motorsports, the enthusiast community, and those suffering from mid-life crises is beyond measure. And that's not even mentioning the hairdressers who have transportation thanks to the cute little convertible. But one of the competing designs which Mazda considered for their interpretation of the British sports car had front-wheel drive. What would life be like if that had been the winner?
Advertisement

These days, the first generation, arguable more than the others, is seen as not the most masculine thing to be driving. Masculinity aside, the first car was not threatening. It wasn't even kind of concerning. It wasn't ugly, but it looked like something which would be considered "toddler-safe." The FWD concept did have slightly more angular lines, but an already curvy, soft-looking car would have been further castrated with the less manly drive. Think about it now. As it is, there are people who give Miata drivers lines about their...sexual preferences... Now remove the RWD, which is about the only thing which gives some macho to the car...

Without a doubt, Mazda's owes a massive portion of its motorsports reputation to the Miata. Spec Miata makes up about 43 percent of Mazda's production-based competitors. The car has made a slew of sports more accessible and more popular. It is worth wondering whether this would have been the case with a FWD Miata.

Miata Is Always The Answer

Drifting, autocross, road-racing, even rallycross has Miatas that show up. The car's design makes in a simple an versatile motorsports platform which facilitates a range of possibilities. Things like Monster Miatas testify to the kinds of projects which Miatas become. I don't think it to extreme to say that none of it would have been possible without the drive going to the back.

What Makes the Mazda Miata Special

The two obvious characteristics which would likely have been compromised would be the rear-drive handling and the weight distribution. It is incredibly difficult to balance having all of the drivetrain in the front half of the car. With the rear drive layout, more weight is distributed throughout the length of the car, which gives the car a balanced feel. Of course, as difficult as it is to make a FWD car balanced like a rear-driven counterpart, it's downright impossible to give a FWD platform the kind of driving dynamic which is created by pushing from the rear rather than pulling from the front.

It should be clear at this point just how grateful we ought to be that the Miata turned out the way it did. The influence it has had on the enthusiast world is profound beyond quantifying, and the great opportunities for fueled fun with a Miata are almost non-stop. Would this have been possible with a FWD version? Or would it have been a Japanese Rietta?

Dean McManis wrote on July 4, 2018 - 12:06pm Permalink
I agree that a FWD Miata would have been a mistake. Certainly the packaging would have been easier to build, and they could reuse the drivetrains out of their various econocars to save millions. But Mazda was smart in recognizing how powerful their buyers base was with driving enthusiasts and weekend racers. And because of their wisdom the MX-5 still commands the market share for 2 seat, convertible, compact sports cars.