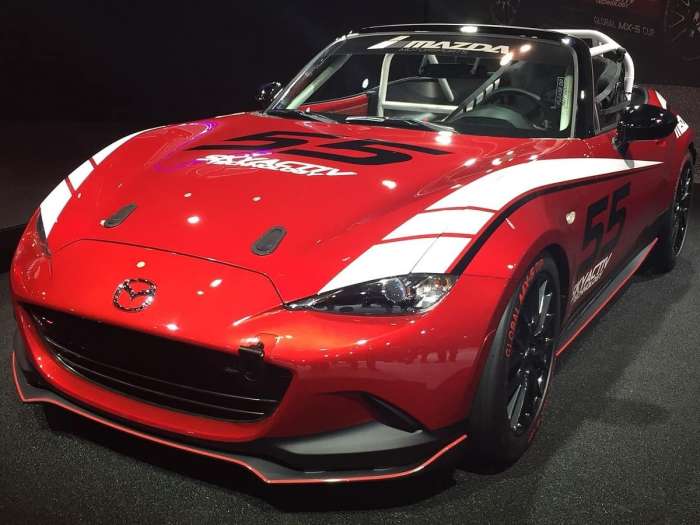 On Top of Great Awards for Winning Races, Mazda Will Give $8,000+ in "Additional Rewards" for Buying a Global MX-5 Cup Car

If you are one of Torquenews's regular readers, you may have read a previous article on Mazda's contingency program, in which Mazda owners can get discounts on parts, and win money for races. Now, Mazda is adding an additional incentive to embark on a Mazda Motorsports adventure. If you buy Mazda's Global MX-5 Cup Car, you'll get over $8000 in rewards.
Advertisement

Yet Another Reason to Buy A Miata

In the loyal Miata crowd, there's an idiom that Miata is an acronym for "Miata Is Always The Answer." Mazda's excellent reputation for engineering and design is sufficient to explain this dogged brand loyalty, but in addition, Mazda Motorsports gives an incredible amount of incentives to aspiring racers and teams,. I've written about Mazda's Contingency Program before, but in addition to this program, Mazda will give you a massive package of awards for buying the race-prepped version of the Mazda MX-5 Miata, the Global MX-5 Cup Car.

A Substantial Package of Benefits

On Mazda Motorsports's website, you can read the list of benefits which come with the car. It's not a short list, but some of the highlights for racers may be "One set of BFG g-Force slick tires...valued at $1060," more than $2,500 off the price of the package of spare parts, and another $2,200 off the price of the crash kit, which includes body panels and suspension parts.

Taking the Edge Off

Mazda's Global MX-5 Cup Car is priced at $58,900, and so an $8,000 package of rewards is by no means an insignificant incentive. For the price, an outside motorsports company called Long Road Racing converts a standard SKYACTIV-powered production Mazda Miata, which has been confirmed to have an additional bump in horsepower next year, into a race-prepped track car, with regulation safety equipment and legal changes to improve the trackability of the already well sorted performance roadster. This is certainly an enticing package, made more attractive still by the added rewards package.

Sound interesting? Well in this case, there's a limit to Mazda's generosity. If you read the details for some of the discounts, you'll see that they read "for the next six Global MX-5 Cup Car purchasers." It's certainly possible that Mazda will extend this limit, but if these rewards interest you, my advice would be to act quickly.

Lexie wrote on June 26, 2018 - 4:37pm Permalink
This is very simple. Here is how it works. You put some stickers on your car, win a race, submit a form, and Mazda (or other contingency partners) give you free stuff.
Lexie wrote on June 26, 2018 - 4:38pm Permalink
Contingency isn't a difficult concept. In this case, Mazda is throwing in incentives for buying a new Cup car, too.

Elon Makes a Cybertruck Statement With an Action, But Quiet in Words
Tesla's Record Month in China: Doubled Registrations in March 2021
END_OF_DOCUMENT_TOKEN_TO_BE_REPLACED