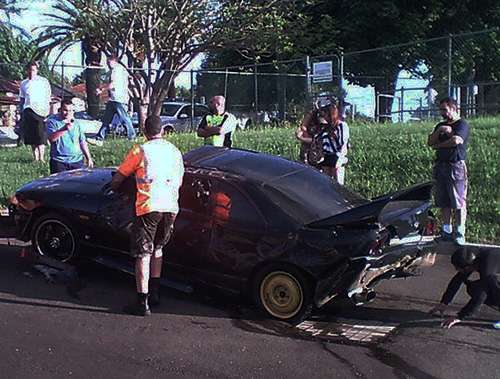 A survey performed by Britain’s best known driving school revealed that roughly 30 percent of students believe they are better drivers than their parents, due a higher degree of care and the lack of certain bad driving habits displayed by their elders.
Advertisement

Many older drivers learned bad habits from their own parents, from a time when the streets weren’t so busy and life had a slower pace. So when you stop to think about it, are you teaching your kids bad driving habits by example?

Somewhere in my files is a quote copied and attributed to a cinematic celebrity that essentially said, “Children seldom hear what you say, but they never fail to see what you do.”

What Desmond Morris called The Naked Ape, in his zoological analysis of human behavior, may pretend to higher communication and learning, but most often simply mimics the behaviors that surround them.

This is an oversimplification, however one that brings up a definite human tendency.

The question arises will these kids lacking their parents bad habits, some of which their age presently precludes, make it to middle age without developing any of those bad habits?

We know one mature individual who you could say has a distracted mind. They can only truly focus on talking, usually on the phone and sometimes even when driving. The son, who is a sophomore in college, is a much better driver even though he tends to text while driving – with great care, mind you.

In another story on Teen drivers and their parents, Torque News revealed how most parents think their kids need more training, but kids think they need better technology so they can do what they do more safely.

SMS technology is now available and slowly moving down the price range of new models, but chances are not featured on the five to ten-year-old cars teens are frequently given to drive.

The RED Driving School survey 500 young graduates during road safety week about driving issues, including insurance, safety and how they see themselves as newly licensed drivers.

A full 74 percent of those queried said they believe insurance companies are unfairly biased again young drivers. The other 26 percent are probably the reason the odds are skewed against young drivers.

Such youngsters were responsible for proving the Nissan Skyline pictured above was not meant to go aquatic despite its fish-like fins. The image was posted by the Highway Patrol and licensed under Wikimedia Commons.

There’s a good chance many kids are better drivers than their parents, but the ones that are not must be avoided if possible – their folks are probably bad enough.

"It's good to see that young drivers are confident in their driving ability and believe that they're better placed to drive safely and competently, said Ian McIntosh, CEO of RED Driving School. "At RED we're responsible for the next generation of drivers and ensuring that, once on the road, they're fully equipped with the driving skills required to be a responsible driver."

Given the battles over school budgets, how many schools now make Driver’s Ed part of a high school curriculum in the US? We unleash something like 4 million new drivers every year – let’s hope they are getting safety training somewhere.

Ultimately it is the autonomous car that will save us all. Then no one will learn bad driving habits from one another. Then the naked apes will have to learn other ways to be rude to each other.

Erik Wood wrote on December 5, 2012 - 8:46am Permalink
Ahhh.. yes - young and invincible... but our CDC just reported that 60% of older teens routinely Text and Drive. I think its starting to become clear that legislation has value in raising public awareness in forums like this one but it will be difficult to solely legislate our way out of this issue. I also read that over 3/4 of teens text daily - many text more than 4000 times a month. New college students no longer have email addresses! They use texting and Facebook - even with their professors. Tweens (ages 9 -12) send texts to each other from their bikes. I decided to do something about distracted driving after my three year old daughter was nearly run down right in front of me by a texting driver. Instead of a shackle that locks down phones and alienates the user, I built a texting asset called OTTER that is a simple and intuitive GPS based, texting auto reply app for smartphones. While driving, OTTER silences those distracting call ringtones and chimes unless a bluetooth is enabled. The texting auto reply allows anyone to schedule a ‘texting blackout period’ in any situation like a meeting or a lecture without feeling disconnected. This software is a social messaging tool for the end user that also empowers this same individual to be a sustainably safer driver. Erik Wood, owner OTTER app do one thing well... be great.
Don Bain wrote on December 5, 2012 - 2:58pm Permalink
Glad to hear this Erik. Keep up the good work! Ain't technology great!?!