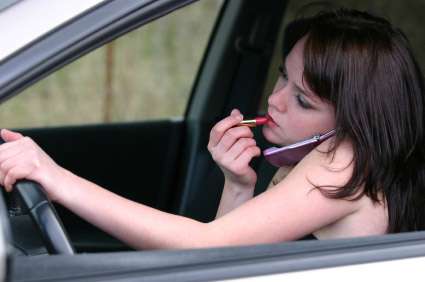 Teens are learning distracted driving habits from their parents

Teenage drivers, no survivors.. Turns out, teenagers learn most of their bad habits from their parents. So that kid you think is completely ignoring you? She's secretly memorizing your every move to copy later, says a survey from SADD.
Advertisement

I predict that the latest poll conducted by Students Against Destructive Decisions (SADD) will go over with parents about as well as a 5-year old dropping an F-bomb in church.

According to SADD, a survey of 1,700 11th and 12th graders (Juniors and Seniors) in school found that those teenagers often witness frequent, dangerous driving behavior on the part of their parents. Further, those teens then often mimic those bad practices and may even use many of the same justifications for doing so that their parents might.

According to the survey, 91% of parents were observed talking on their mobiles while driving and 90% of the teens surveyed admitted to doing the same. 88% of parents are seen speeding and 94% of teens do so. Texting is where the real age divide comes into play, however, with a mere 59% of parents doing it while 78% of teens do. Finally, 47% of parents and 33% of teens drive with no seatbelt (we're free to kill ourselves as we wish, damn you), 20% and 15% of parents and teens respectively drive after drinking, and 7% versus 16% (another age divide) drive after smoking marijuana.

Of course, some guy with a long title of office at SADD, Stephen Wallace, says that "the best teacher for a teen driver is a good parental role model." This despite my father's assurances that the best teacher was "a swift kick in the ass." I'll refer Mr. Wallace to the patriarchal wisdom of my family and let him hash it out for himself.

Either way, your teenagers learn from you, parents. Even if it doesn't seem like they are. Not to sound like some kind of public service announcement, but kids think of you as role models. Try to be the good kind rather than the "don't try this at home" type.