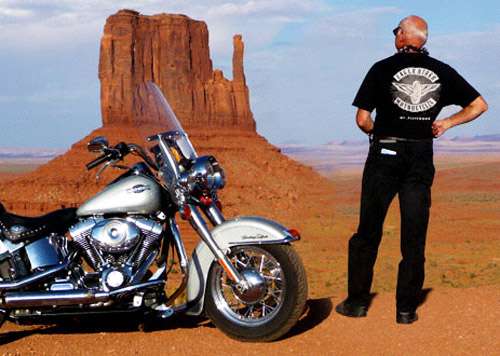 As the original and most successful pioneer of motorcycle rentals, EagleRider has provided its clients "twenty years of living the American Dream on the prestigious Harley-Davidson motorcycle." Contest participants also can win an invitation to EagleRider's 20th Anniversary private party celebration in Los Angeles July 21 as well. All contests are underway and winners will be announced in early July.

"We pioneered global motorcycle tourism in 1992 with a dream, all the money in our pockets and four Harley-Davidson motorcycles in a Los Angeles garage," said Chris McIntyre, EagleRider co-founder and president. "Now, we're an international franchise that offers motorcycle enthusiasts the opportunity to explore tourist destinations around the world on a motorcycle. We want to show our appreciation to our customers, vendors and franchisees."

The by-invitation-only VIP catered party for EagleRider's distinguished partners will feature celebrities, bands, a motorcycle fashion show and VIP accommodations as part of the festivities. Winners of the grand prize in all three contests with their plus one will get to rub elbows with the founders of EagleRider, along with a 3 day self-guided motorcycle tour of their choosing, originating in Los Angeles.

In the first contest, participants submit photographs of themselves riding a motorcycle – to be judged by Facebook visitors and their fans. Naturally, the entrant with the most likes is the winner. Other prizes are awarded daily prizes including t-shirts, gift certificates and commemorative pins. Daily winners also earn a chance to win the grand prize. Those interested can visit facebook.com/eaglerider to join in the fun.

The second contest involves those who rent from EagleRiders by June 30 to be entered for a weekly prize of a t-shirt, gift certificate or commemorative pin with one winner each week. The grand prize will be awarded to one of the 20 weekly winners.

"EagleRider's motto is 'we rent dreams,' so, we're excited to make dreams come true for the lucky winners of these two contests," McIntyre, added.

EagleRider empowers the adventures of motorcycle enthusiasts by offering over 4,000 perfectly maintained Harley, Honda, BMW, Triumph and other models in over 100 locations worldwide. A sizeable network of EagleRider outlets creates the ability to offer One-Way Rentals, Guided Tours and Self-Drive Tours in some of the most popular tourist destinations of the world.