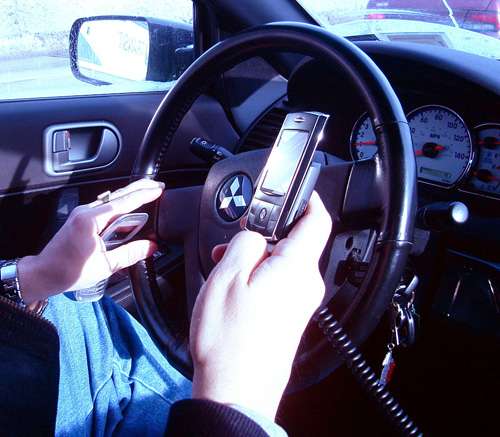 Why use phones in cars when it's seen as unsafe?

Have you ever witnessed a driver do something showing a lack of attention – like turning in front of you or sitting motionless at a green light – and remarked they must be on the phone?
Advertisement

A good many of us will then proceed to use our phones when driving – oblivious to the fact we may be driving the same way – if not adamant that we can drive better than others while on the phone.

According to AAA, if you see someone using a phone in a car there’s a fair chance they will also speed, fail to buckle up and drive while drowsy, or even send texts or emails while driving.

Are you rethinking your phone use yet?

"Ninety percent of respondents believe that distracted driving is a somewhat or much bigger problem today than it was three years ago, yet they themselves continue to engage in the same activities," said Peter Kissinger, President and CEO of the AAA Foundation for Traffic Safety. "More work clearly is needed to educate motorists on the risks associated with using a cell phone while driving, especially given that most Americans believe this problem is becoming worse."

A survey by AAA found 69 percent of licensed drivers admitted talking on a phone while driving last month, despite 89 percent saying they believe other drivers using cell phones are a threat to their safety.

Where is the disconnect?

Those who regularly use phones in their car when pressed will further admit to the following:

On the other hand, those who won’t risk using a phone in car are correspondingly less likely to indulge these risky behaviors:

No one really needs a study to know texting while driving is very dangerous - 95 percent disapprove of the practice. So why will 27 percent of drivers do just that at least once a month? Another 35 percent admitted reading a text while driving last month.

We all also know the younger a driver is, the more like they are to indulge in these behaviors and fortunately more and more cars are minimizing the risks of social communication in the car as they become more connected.

The impact that using a phone while driving has on reaction time roughly quadruples the risk of collision. According to the NHTSA, more than 3,000 people are killed and nearly half a million are injured each year in distracted driving crashes, and that is probably a low estimate.

Some people by nature are risk takers, but in general these are calculated risks. It would seem as a nation, we should calculate the risk of certain behaviors to be considerably higher than we do at present.

Aaron Turpen wrote on January 26, 2013 - 10:26pm Permalink
Of course, those who don't use their phones in the car are likely: 1) extremely conservative drivers; 2) old; 3) boring. :) Fact is, cell phones are just a very tiny percentage of the overall "distracted driving" phenomenon. In fact, they contribute to fewer car wrecks per year than does tuning the radio, talking with someone actually in the car, and eating while driving. Not that laws have to make sense, since they rarely do.
Don Bain wrote on January 27, 2013 - 1:57am Permalink
I'm sorry I overlooked the Libertarian view that everything people do is just fine and that everything governments do are - well - intrinsically evil. One of the most distracting and dangerous things I ever did in a car was smoking cigarettes. Dropping a lit Marlboro is far more disconcerting and distracting than using a phone, eating or tuning a radio, two of which most people have done for generations with relative safety. Another biggie is having a wasp in the car. but obviously that is not a problem government can solve. The point is even though we know certain behaviors are risky, we continue to do them anyway. We need to learn not to do this, but the word is out and the problem persists. It is in the nature of humans to make mistakes and in the nature of governments to try to do something about constituents dying, egged on by the remorseful families left behind. It's all about education, but that part is done. So what do we do now?
Aaron Turpen wrote on January 28, 2013 - 5:55pm Permalink
Well, Don, the data shows that cell phone bans for drivers have not decreased vehicle accidents in any appreciable or measurable way. Face it, they're just another revenue scheme for the cops. So hate on Libertarians all you'd like (I'm not really a libertarian, I'm a voluntaryist), but facts don't back up the idea of "distracted driving" laws that only target cell phone use.
Nicolas Zart wrote on January 29, 2013 - 7:29pm Permalink
We continue to write and educate people. I thought about buying a fully rugged Jeep, convert it to electricity and put a bazooka there for deterrence but I don't even think this would do.
rob wrote on January 27, 2013 - 11:09am Permalink
Thanks for the article. Another question is if communication devices in cars are so dangerous, why are police and military allowed to have them? Libs are working worldwide for a more voluntary approach and exposing self-serving stautes. For info on people using voluntary Libertarian tools on similar and other issues worldwide, please see the non-partisan Libertarian International Organization
Don Bain wrote on January 27, 2013 - 4:27pm Permalink
Have you see the stories on the wrecks cops have because they are looking at the computer screens. This will eventually be less of a problem due to Bluetooth phones and more vocal command systems, but until cars are autonomous, people will still be distracted by something from time to time.
John Goreham wrote on January 28, 2013 - 11:17am Permalink
1 hour ago in a parking lot of a supermarket I waited like a few others as a mom backed her ginormous Suburban out of a parking space with one hand, blocking the row. The other hand was pressed to her face holding a phone. 1) Is she too stupid and disrespectful to just finish the call while parked? 2) Is she too stupid and lazy to link her phone to the vehicle using BlueTooth? Don't tell me that some cars don't have Blutooth, this monster was brand new and easily over $50K in American iron. If the mom had crushed an elderly walker, one of which stood waiting in 20 degree cold while she moved her leviathan, what would her excuse have been? Lib, Dem, Repub., or Green Rainbow (I'm from Mass.), can't we all agree that there is a minimum level of common sense and mutual respect expected of a good citizen? Good article Don.
Aaron Turpen wrote on January 28, 2013 - 5:56pm Permalink
Common courtesy only seems to exhist in small populations. Put a million or so people into a square mile and you have a tendency towards self-centered a-holiness. Regular gas here, btw, is $2.69 and diesel is $3.19 today.
Nicolas Zart wrote on January 29, 2013 - 7:25pm Permalink
Sounds like you live in California. I'm amazed at how many people use their phones with one hands around here, even police officers. Other drink, eat, scratch their noses, put on make up or simply yell at the kids behind. I've learned how to drive in tough European cities where you really get a sense of traffic but California has taught me to stay very far away from the absent minded, spatially challenged multi-ton crushing machine. And yes, I drive a tiny car!