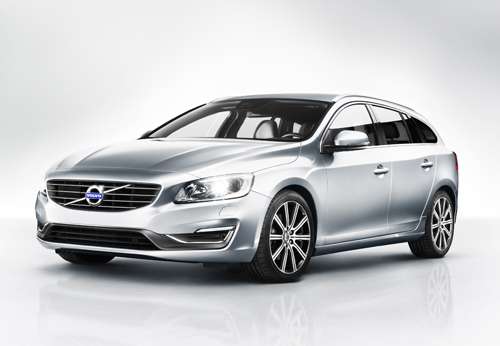 With worldwide sales nearing 65K in 2012, the Volvo V60 Sports Wagon will soon come to America to extend its global following.
Advertisement

The announcement was made at the New York International Auto Show by Doug Speck, Volvo Cars' senior vice president of marketing, sales and customer service, indicating the new V60 will come to the U.S. market early next year, with pricing and specs to be announced later.

At the auto show, the global debut of the R-Design version of the car was on display. Have you noticed how with the widespread switch to highly aerodynamic body styles, many vehicles are beginning to take on an aquatic appearance? This impression is somehow enhanced whenever the vehicles have a silver finish, as does the Volvo pictured here.

With its elegant, curvaceous and smoothly sculpted surfaces, the V60 R-Design emulates the sleek, slippery shape of a submersible craft, distinguished from such only by four multi-spoke wheels and tires – a silvery vision promising both luxury and performance.

"The V60 builds upon our wagon heritage, and it's a beautiful evolution in design and direction for Volvo," added Volvo Cars of North America President and CEO John Maloney. "Many consumers will be glad to see the addition of this exciting sports wagon to the Volvo lineup in America, and this time, we've added sophistication with the dynamic driving performance of a sedan."

The Volvo V60 is designed for those who want the dynamic handling of a sports sedan, but still need a wagon’s versatility. With the new V60, the automaker has attained the next level of design and sophistication, combining nuances of style from its best-selling sedan with the sleek silhouette of an elegant Eurowagon.

The vehicle’s versatility is a function of the next big thing in rear seating, namely the ability to fold flat along a 40/20/40 split, providing several configurations of interior space to accommodate passengers or cargo in a highly flexible manner.

In Europe, the V60 Sports Wagon comes with a choice of seven different gas engines and three diesel variants. We are just guessing the manufacturer may offer the 2.0T, T5, and T6 gasoline engines, and possibly the D5 diesel powerplant in the American models, providing viable options for US buyers.

Chances are the Volvo V60 plug-in diesel hybrid will not be forthcoming for a while, but with the growth of plug-ins in the US market, maybe it will cross the pond sooner than we think.

So how does a plug-in diesel hybrid vehicle sound to you?