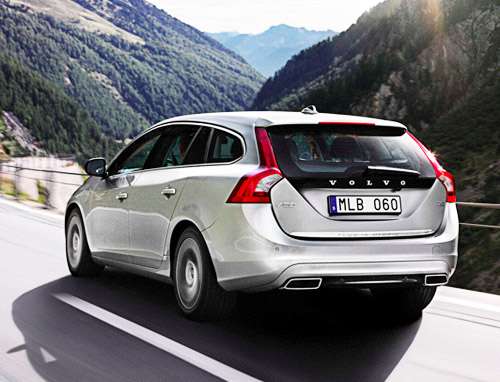 Volvo has announced pricing of what they call their "most technically advanced model ever," the world’s first diesel-hybrid plug-in, the 2013 V60 at 57,000 Euros or $ 74,630 U.S.
Advertisement

(TorqueNews) Volvo touts the diesel-electric powered Eurowagon as an “electric car, hybrid car and muscle car all rolled into one.”

“With the V60 Plug-in Hybrid we boost our leading position in electrification. None of our competitors can offer customers an equally ingenious car. It elevates hybrid technology to an entirely new level,” said Stefan Jacoby, President and CEO of the Volvo Car Corporation. "There is immense interest from the markets. We are convinced that the first thousand cars will be sold even before production gets under way next autumn."

Volvo will initially produce 1000 cars for the 2013 model year, increasing production of the V60 Plug-in Hybrid to 4000 and 6000 annually in 2014. The Swedish company expects 30 percent of their V60 output will go to Sweden and other Nordic countries. Germany, Switzerland, Belgium, France, the Netherlands and Britain will each get from 5 and 15 percent of the models, with the expectation that 80 percent of sales will be purchased as company cars.

"Any customer can have a car painted any color that he wants so long as it is black," Henry Ford was quoted as saying and Volvo is taking that approach to the 2013 V60 Plug-in Hybrid as it is only available in Electric Silver livery with black leather upholstery, contrasting stitching and inlays of blue-grey wood.

The front wheels are powered by a five-cylinder, 2.4-liter turbo-diesel engine producing 215 hp. The rear axle is driven by a motor producing an extra 70 hp. The car utilizes a six-speed automatic transmission and an 11.2 kWh lithium-ion battery pack beneath the cargo deck.

The combination of the diesel engine and emission-free electric power keep the Volvo V60 in the low end of CO2 emissions.

The hybrid electric car is recharged from a standard 230V outlet. Fully charging with 10 amps takes 4.5 hours. This can be cut to 3.5 hours with 16 amps. A 6-amp charger will take 7.5 hours to power the battery, still achievable overnight.

"The on-demand possibility to choose between the car's three different temperaments makes the V60 Plug-in Hybrid superior to all other hybrids on the market,” stated Jacob. “Thanks to the Pure, Hybrid and Power buttons, the V60 Plug-in Hybrid is the perfect choice for the uncompromising customer who wants minimum carbon dioxide emissions combined with maximum driving pleasure."

Tesla-Funded Research Reveals One of The Biggest Mysteries of EV Battery
Tesla Tesla Buyer Nets a Whopping $12,000 Discount After Asking for Reduction
END_OF_DOCUMENT_TOKEN_TO_BE_REPLACED