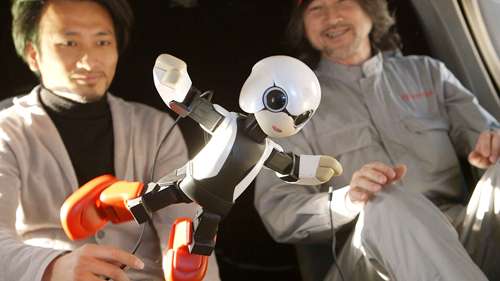 Toyota's Voice Recognition to get big boost from Kirobo in space

Toyota’s Voice Recognition system is probably one of the best at interpretive voice recognition, handling nuances of accent and variations of basic commands fairly well, but to make it even better a robot named Kirobo will travel to the International Space Station to learn to talk with astronauts.
Advertisement

In order to take the voice recognition aspects of its automotive system to the next level, Toyota collaborated with Dentsu Inc, the Research Center for Advanced Science and Technology (RCAST), the University of Tokyo and Robo Garage Co, Ltd. to install the proprietary software into Kirobo.

Kirobo is a 13.4-inch tall robot that will board the Kounotori 4 cargo spacecraft slated to lift off from the Tanegashima Space Center en route to the International Space Station (ISS) on August 4.

Additional technical support was provided by the Japan Aerospace Exploration Agency (JAXA). Kirobo has undergone testing and training in zero gravity along with other trials in preparation for the journey.

After Kirobo arrives at the ISS he will spend the next three months acclimating to his new environment. Commander Koichi Wakata, Kirobo’s best human friend, will arrive in November or December.

This means Toyota will have participated in helping create the first chat between a human and a robot in space. The two will have half a year to catch up on things on Earth and what its been like for Kirobo aboard the ISS.

Then, next summer, the scientist will return to Japan where the current state of human/robot conversation will be evaluated at length. Perhaps, thanks to these efforts, our cars will better understand the things we say in the days to come.

If Kirobo is a reflection of his makers, he will probably spend the next six months wondering what Commander Wakata actually meant.

Kirobo will return to Earth in December 2014 to reminisce about his space adventure and watch old Astro Boy cartoons. He’s hoping his friends at Toyota will install some of those cool sound effects. He will also catch up with his twin Mirata, that will remain on Earth to help trouble shoot any problem Kirobo might encounter aboard the ISS.

Kirobo’s dream is “to create a world where humans and robots can live together.”

Stranger things have happened and will, no doubt, continue to do so.

Tesla Contemplates A New Strategy for China Retail even As Sales Boom
Jay Leno on Elon Musk & EVs: “I Think He Should Get ... Credit"
END_OF_DOCUMENT_TOKEN_TO_BE_REPLACED