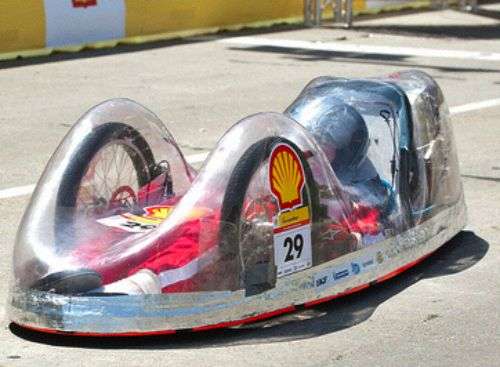 It’s all about pushing the envelope of fuel-efficiency to its maximum limit. In the fifth year of the Shell Eco-marathon, students from the U.S. and Canada convened in Houston for a two-day event to design, build and test fuel-efficient vehicles that travel the greatest distance using the least energy.
Advertisement

For the third consecutive year, students from Quebec’s Universite Laval won the competition with the phenomenal achievement of 2,564.8 mpg in the prototype class. They beat last year’s performance by 77 mpg.

In the UrbanConcept class, the team from Louisiana Technical University in Ruston, La. took first prize with a best run of 646.7 mpg.

"Every year, the competition at Shell Eco-marathon Americas gets a little tougher," said Anthony Bernier of Universite Laval. "With more teams participating this year, there are a lot of really smart and innovative fuel-efficient ideas to be seen on and off the track. We put a lot of time and hard work into our vehicle this year and are very proud of how we did. We are excited to be Shell Eco-marathon Americas champions for the third year in a row and to have beat our mileage achieved last year!"

The Shell Eco-marathon is intended to challenge students to think outside the box with innovative fuel efficiency solutions. In that spirit, an e-mobility category was added to the competition this year. That grouping included both Prototype and UrbanConcept vehicles powered by electric motors using hydrogen, solar or, for the first time, 'Plug-in' battery sources. Other fuels in the internal combustion powered vehicles include gasoline, diesel, GTL, biodiesel or ethanol.

Shell Eco-marathon is part of Shell's Smarter Mobility program, aimed at meeting the needs of increasing demand on energy for transport. While alternative energies such as hydrogen and advanced biofuels have real potential, supplies of these energy sources are insufficient to make a significant difference for the next few years. With an eye on the future of transportation, the students compete with their innovations to find ways to more wisely use energy.

The 62 teams entered 56 Prototype entries and 12 UrbanConcept entries. Some teams had multiple entries in different categories.

• In the Prototype class there were 39 vehicles powered by combustion engines included 32 by gasoline, three by ethanol, three by diesel fuel and one by biodiesel.

• 17 of the Prototypes were powered by plug-in electricity, three by fuel cell/hydrogen technology and five by solar.

•The UrbanConcept class competition consisted of nine vehicles powered by combustion engines including seven by gasoline and two by diesel fuel.
• Three more UrbanConcept vehicles were powered by plug-in electricity, one by hydrogen fuel cell and one solar.