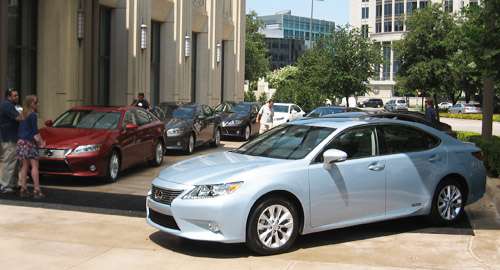 Occasionally as auto writers, we have the opportunity to drive both traditional internal combustion engine and hybrid electric variants of the same model, allowing a comparison of the virtues and vices of either mode as it applies to driver’s needs.
Advertisement

One such opportunity occurred recently during the media introductions of the sixth generation of the gas-powered 2013 Lexus ES 350 and the initial debut of the hybrid variant, the 2013 Lexus ES 300h.

Interestingly, in the case of the entry-level luxury sedan, the gas and hybrid versions are equivalent in many aspects, so the subtleties that distinguish them are clues to which best suits your values and lifestyle.

Personal values
Much of the choice between a gas and hybrid version of the same model will spring from the potential owner’s view of global warming as a reality, the value placed on reducing imports of foreign oil and to what degree they feel a need to contribute to a more sustainable world. However, this is not what the entire decision process should be based on as there is much more to consider.

You might pick the Lexus ES 350 out of brand loyalty as there are already one million ES models on the road from the five previous generations. Or, if you place a heightened value on trunk storage capacity, the gas model has 3 cubic feet more room for your luggage or gear. If fuel economy is important, you’ll certainly want the hybrid, but if sheer power is what you value then the Lexus ES 350 would again be your choice.

Driving modes and lifestyle
The hybrid Lexus ES 300h is ideal for the medium to long commute from the ex-burbs or suburbs in or out of the city daily to a driver who still wants a luxurious ride. Those with shorter commutes may prefer the gasoline model as efficiency is not necessarily as much of an issue, without denying themselves a finely appointed vehicle.

Whether your tastes run to the ES 300h’s Nuluxe and Bamboo or the ES 350’s Leather and Birdseye Maple textures and veneers will push your decision one way or the other.

Those that say it takes five to seven years to get your money back on the extra cost of a hybrid are overlooking possible fluctuations in the price of gas and the retained value at trade-in time.

Performance
The performance and handling of the both the Lexus ES350 and ES 300 are fairly equivalent, with only about one second between the pair’s zero to 60 times. The gasoline-powered ES 350 takes that slight lead. Other than that, the way they corner, accelerate and come to a stop is very similar indeed.

If you drive the ES 350 in Eco mode and the ES 300h in Sport mode, you’d be hard pressed to know the difference except for the utter quiet of the hybrid model until you depress the accelerator pedal. In this category, the choice is simply based on one point alone: is one-second quicker acceleration more important than 15-mpg better mileage? Either it is or it isn’t!

Craftsmanship
An interesting point during the technical presentation in Dallas involved the concept of Takumis or master craftsman. Only 250 Lexus employees have attained this level of expert artisanship and they are all Japanese.

One example of this Takumi craftsmanship comes in the soft interior materials covering the dashboard, center console and other tactile surfaces. To become a member of this exclusive guild, applicants must be capable of folding an origami cat face, using only their disfavored hand. This level of skill and exacting precision goes into every Lexus vehicle and is visible in the crisply pristine stitching running throughout the interior.

At one Lexus intro an executive said the fit and finish was such that a marble placed in the lip between the hood and front fender should roll from one side to the other without falling off. This is the impassioned pursuit of perfection and fortunately it is standard on both models.

Pricing/Taxes
Pricing for the 2013 Lexus ES 350 and ES 300h have yet to be announced but hybrid technology is still paying the early bills so the hybrid model could still be $3,000 to $4,000 more. Unfortunately, the hybrid tax rebates have expired as the onus is now on electric cars for federal tax subsidies.

In the long-term
Whether to buy a gasoline or hybrid model also depends on how you think the value of used cars and the price of gas will change over the next three to 10 years, depending on how long you plan on keeping the vehicle.

Used cars are now at heightened value do to a higher demand than supply. As the economy turns and more people buy new, the supply of used cars may expand, creating downward pressure on used car prices. Hybrids and other high-mileage vehicles tend to retain more of their value over time.

It is difficult to imagine a scenario in which the price of oil will decrease significantly – other than half the world switching to electric vehicles tomorrow and we don’t recommend holding your breath while waiting for that to happen.

The most likely scenario is that gas may remain stable for a time, but very few people really expect to be paying less for it in five years, no matter who wins the next two elections.

The final word
Bill Camp, Dealer Education Administrator for Lexus College, told us the company expects a full quarter of sales to be the hybrid model, a result of the growing popularity of high-mileage vehicles.

According to Brian Bolain, Lexus National Marketing Communications Manager, the 2013 Lexus ES 350 and ES 300h are aimed at accomplished, independent professionals who want to be noticed and make a statement, but who tend to get ahead by making choices with an open mind.

The Lexus buyer is expected to value family, image and style, as well as the environment. He or she appreciates rewards for hard work, yet also values practical applicability to the world we live in.