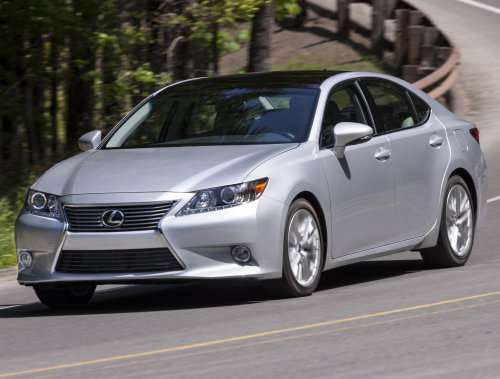 The Lexus ES lineup shares a great many components with popular Toyota models but while the early days of the ES sedans were criticized for being too much like the Camry, the newer versions have taken strides to clearly differentiate the two – a point that is very evident with the 2013 Lexus ES350.
Advertisement

The Exterior
The 2013 Lexus ES350 introduces the industry to the 6th generation of the ES lineup and unlike the first five generations which were based directly on the Toyota Camry, the 2013 ES350 is based on the upcoming Toyota Avalon. Also unlike older Lexus models that were pinned with the stigma of being a dressed up Toyota – the 2013 ES350 is clearly a model of its own, sharing a great deal in terms of design with the pricier Lexus models like the new GS350.

The new exterior design of the 2013 Lexus ES350 begins up front with a fascia design that shares the spindle shape with the front end of the new GS350 sedan. Like the GS, the 2013 ES350 sports a sedan of projection HID headlights underlined by a sharp looking LED light bar with a set of smaller, round fog lights mounted towards the outer edge of the lower front fascia. Overall, the front fascia design of the new ES350 looks very much like a miniaturized version of the GS350, with the exception of the vents mounted inboard of the fog lights on the GS350 that do not appear on the ES350.

The GS-styling continues across the hood, through the roofline and along the back end right through the rear fascia of the 2013 Lexus ES350. The lines of the new front spindle grille flow up through the hood with a raised section of the hood widening as it nears the cowl on the new ES while the side body line, sitting very high on the fenders, doors and quarter panels give the car a very upright, sporty look. The greenhouse area is long, flowing smoothly back into the short trunk which is punctuated by a subtle spoiler molded into the trunk lid. There is also a hard body line running along the lower rocker panels that, while not quite as sharp as the GS350, continues to bolster the classy-yet-sport look of the new ES350.

The exterior design of the 2013 Lexus ES350 does a masterful job of taking the design cues of the current Lexus lineup and applying them to this smaller, front wheel drive sedan. Now, people are far more likely to say “that looks like a GS350” than they are “that looks like a Camry”.

The Interior
The 2013 Lexus ES350 is based on the Toyota Avalon which is slightly larger than the Toyota Camry on which the previous ES lineup was based. This means that the ES350 is slightly larger than the old model in every dimension externally but on the inside, the new ES350 gains a noticeable amount of leg room for rear passengers. The rear seat design is very similar in the ES350 to that found in the GS350 and shy of Lexus PR folks, someone looking at a picture of both rear seating areas will likely have a hard time picking which is which…and that’s a good thing for the 2013 ES350.

In the front seating area of the 2013 Lexus ES350 is still very similar to the GS350 but with slightly less elbow room and knee room. However, the design and amenities are there; which really shows what a great “entry level” luxury car the new ES350 is compared to the rest of the luxury industry. This includes bucket seats that are comfortable but with deep bolster areas, the ES350 provides a great firm position for the driver and front riding passenger during spirited driving. The two gauge cluster (also similar to the GS350) is flanked by a large infotainment screen which is controlled by the computer mouse-like panel found next to the shifter. I have experienced this control system on a variety of Lexus products and I have loved it in every case…with the ES350 being no exception. From an advanced navigation system to a premium audio system featuring satellite channels, AM/FM, auxiliary input and Pandora radio – the 2013 Lexus ES350 leaves very little to be desired for the driver and passengers.

The 2013 Lexus ES packs all of the luxury and technology that you see in the other (more expensive) Lexus models – further helping to bolster the individual reputation of the new ES lineup.

The Drive
So the 2013 Lexus ES350 looks great on the outside with design cues from other higher line models in the Lexus lineup and it offers all of the bells and buzzers inside but the most important factor is the drive. Our man John Goreham talked last week about the new 2013 Lexus ES300h Hybrid which offers incredible fuel economy in this sexy entry level luxury sedan but for those who want more grunt out of their new Lexus – the ES350 could be the car for you. Click here for more on the 2013 Lexus ES300h Hybrid.

The new ES350 is powered by a 3.5L V6 that sends 268 horsepower and 248lb-ft of torque to the front wheels via 6-speed automatic transmission. While this drivetrain may not offer the exceptional fuel economy of the ES300h, the ES350 packs enough power to offer that fun-to-drive factor that has become so important in the luxury segment these days – enough power to allow the ES350 to dash from zero to 60 miles per hour in just 7.1 seconds en route to running a quarter mile time of 15.1 seconds (based on Toyota company figures). The ES350 also offers an electronically limited top speed of 130 miles per hour and while we didn’t get to test those kinds of speeds during our short test drive- I can attest that the new ES sedan will very willingly eclipse any posted speed limit in the US. Also, Lexus expects that the ES350 will offer 21mpg around town and 31mpg on the open road – numbers which we found to be very accurate during our short testing time. The ES350 also features a choice of Eco, Normal or Sport driving modes that either improve or back down on the throttle responsiveness in an effort to improve fuel economy.

On top of offering strong acceleration, the 2013 Lexus ES350 presents a nice smooth ride that you would expect from a luxury sedan but at the same time – the new ES350 seemed confident on twisty roads. The suspension had a little body roll to it but it should be kept in mind that this is a “basic entry level” luxury sedan and not a sport model so while it didn’t corner like the GS350 F Sport; I didn’t expect that it would. The ride around town and on the highway was very quiet, with very little of the road’s roughness transferred through the suspension or through the steering wheel so the comfort of both the driver and the passengers is safe from the rough surfaces of America’s highways.

The Final Word
The 2013 Lexus ES350 is an all new entry level luxury offering for Toyota Motor Co. and unlike past models that could be accused of being a chromed out Camry – the new ES350 is a luxury car with a personality all its own. The Lexus brand has done a fantastic job of applying the sharp designs (both inside and out) of the Lexus GS350 to the new ES sedan and while the same drivetrain has made the trip from the 5th generation to the 2013 models; the new, lighter construction and revised suspension system allow the new ES350 to handle better, perform better and achieve better fuel economy figures.

Toyota vs Tesla: Which Stock To Buy These Days
For Some Former Daimler Managers Daimler Is Authority, While Tesla Is Like a Startup
END_OF_DOCUMENT_TOKEN_TO_BE_REPLACED