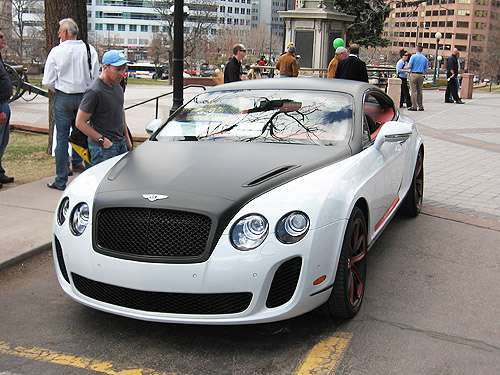 The 111th Denver Auto Show, the second oldest in the U.S., still doesn’t get all the sexy debuts, reveals and concept cars of the better known national and international shows, but continues to add special events and new features while drawing ever-increasing crowds from seven states.
Advertisement

The 2011 Denver Auto Show increased its footprint to 500,000 sq. ft., a 25 percent increase. Proceeds were up 24 percent and media coverage climbed by 60 percent, largely thanks to the presence of Camp Jeep who will return again this year. Chicago would not even talk to Chrysler about this feature because of this year’s pending Democratic National Convention in the same Windy City facility.

Camp Jeep takes up a considerable piece of floor space during the 2012 Denver Auto Show where participants can experience riding in Jeep vehicles over a course simulating the offroad navigation of rocks, inclines, declines and splashing through water,

The show runs from March 21 to 25 in the Denver Convention Center, where the Big Blue Bear is still trying to look in, but the two weeks before will be full of events leading up to the show itself.

A special event over the past few years has been the Green Car Parade, which actually refers to a display of hybrid, electric, high-mileage, clean diesel and flex fuel vehicle in the rotunda drive of the State Capitol building. Last year this event even included a Bentley anxious to point out its flex-fuel capability – just as the Fisker Karma shows you don’t have to appear plebian to go green. It will be held on March 18 this year.

This year selected green cars will be touring the state in the week leading up to the Capitol showcase in an event named the Green Car Convoy. Members of the Rocky Mountain Automotive Press, now numbering over 60, have been invited to participate by driving the cars throughout the state in three separate jaunts. Torque News is very likely to get first hand reports from this ride and drive opportunity.

A day and a half of meetings will inform attending dealers of the latest and most effective way to use online marketing, search engine and social media expertise to promote sales during the 2012 Innovative Dealer Summit March 21-22.

Completely new this year will be an Automotive Career Fair running during the show, allowing attendees looking for a new or better job to confer with 25 new car dealers, 25 vendors and 35 suppliers to the automotive market. Interested applicants should bring copies of their resume.

A returning feature this year is the Dub Show Tour, a display of pimped-out, tricked up cars, many of whom belong to sports celebrities.

Another new feature will be the Hispanic Day at the 2012 Denver Auto Show sponsored by the local affiliate of Telemundo. Latin performers and celebrities from local radio and TV will be on hand to welcome a demographic that is nearly a third of Denver itself.

Another fascinating aspect of the 2012 Denver Auto Show will be an exhibit of classic cars from the LeMay Museum. The four-story museum on a nine-acre campus in Tacoma Washington will be one of the largest automotive museums and collections in the world and Denver is lucky to get an advance look at these classics.

The Clear the Air Foundation will also have an automotive recycling exhibit to illustrate their collaboration with the Colorado Dealers Association that invites area dealers to demonstrate their civic pride by donating old gas-guzzling smog-mobiles (called gross emitters) to the foundation. They make sure the engine, shell and frame of each one is crushed and shredded, never to pollute the air again.

Salvageable parts and systems are sold to parts recyclers. Money raised by the Clear the Air Foundation’s efforts goes to support scholarships for students pursuing automotive or related technology courses of study.

Though not the most celebrated, the 2012 Denver Auto Show will continue its growth and influence among a growing part of the automotive market in its 111th year. Denver is only the 16th largest market in the U.S. by population, but the 8th largest in terms of dispensable income. Auto manufactures should take note of this and plan accordingly.

Aaron Turpen wrote on February 27, 2012 - 10:23am Permalink
I have yet to attend a Denver show that sucked. Everything from big rigs to Deloreans to the latest releases and ride-and-drives from manufacturers is there. Always awesome.

LG's New EV Battery Plant Is a Welcome News for Tesla
Tesla Giga Berlin's New Hurdle: It's Not Only the Gov't, but Now Tesla Itself
END_OF_DOCUMENT_TOKEN_TO_BE_REPLACED