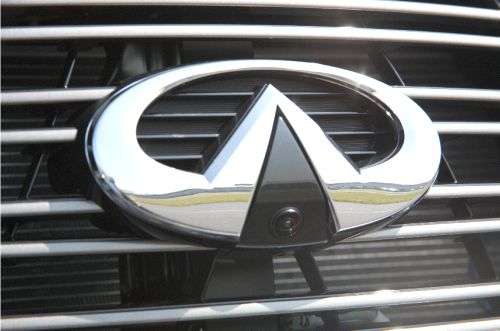 In addition, the Predictive Forward Collision Warning System uses millimeter-wave radar to detect the deceleration of the second vehicle ahead, alerting the driver in advance of a sudden drop in speed of the vehicles before them.

Acceleration Suppression for Pedal Misapplication
In car parks or other confined areas, in order to help preclude collisions with obstacles like walls resulting from a driver's misapplication of pedal controls – hitting the accelerator instead of the brake or over-accelerating – Nissan has developed a function so a vehicle can tell if it is on a road or in a parking lot by using image data from the Around View Monitor's (AVM) four cameras.

When the driver presses the accelerator pedal to the floor, this function allows the vehicle to accelerate if it is on a road, and does not in a parking space. This system also detects obstacles via sonar, automatically applying the brake to avoid or lessen impacts when the vehicle is about to contact or collide with nearby objects.

Using the AVM and sonar system helps reduce the risk of accidents occurring through misapplication of the accelerator and brake brought about by driver error. Nissan aims to bring this technology to market within two years.

This system has three functions to be installed in new models from 2012, followed by global distribution: Blind Spot Warning, Lane Departure Warning and Moving Object Detection. The latter activates when using reverse, detecting moving objects such as pedestrians near the vehicle. When a moving object is detected, the driver is warned with a buzzer and display signals. Nissan plans to apply this function to the AVM in the Elgrand, as part of minor changes planned this November.

Predictive Forward Collision Warning System.
To help avoid vehicular pileups resulting from the rapid deceleration of vehicles in front and out of sight, a sensor in the front of the vehicle analyzes the relative velocity and gap existing between the two vehicles before you. When the system determines the need to decelerate, it warns the driver with a buzzer, a visible alert and also by pre-tensioning the seat belt.