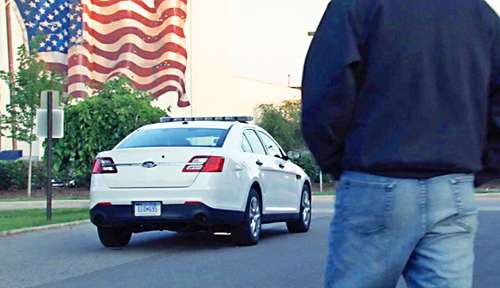 Ford is adding new technology to its Police Interceptors to raise security levels for constables working in squad cars – especially late at night – removing the threat of surreptitious approach from behind.
Advertisement

When on, the system uses its sensors to continually monitor the rear of the cruiser, setting off an audible alarm, rolling up windows and locking all doors if an intruder is detected.

This system is officer activated, so it need not be deployed in a situation where normal foot traffic would set it off continually. It has its true value for officers parked on dark residential streets, filing reports from the Ford Police Interceptor or using the onboard computer to research current cases.

The system has a patent pending and is the design of Randy Freiburger, Ford police and ambulance fleet supervisor, who developed the idea after spending long hours on patrol with police officers – learning firsthand the security concerns of officers working in their cruisers during day to day patrols and investigations.

“I can tell you from personal experience at night that officer security is a critical concern,” said Freiburger. “Unfortunately, there are people with bad intentions who sneak up on police officers. This system builds upon the Ford Police Interceptor DNA that puts safety and security at the top of the list.”

Cops routinely have to file reports, monitor onboard computers, radar guns or other enforcement tools, while performing assorted tasks in their vehicle. Ford’s Surveillance Mode provides an extra level of security to guard against blindside threats – especially during darkness when visibility may be difficult.

The system results from collaboration between Ford and Intermotive Inc, of Auburn CA, to develop and sell the system as an option, along with other new law enforcement products.

The system can be installed at the Crown facility near Ford’s Chicago Assembly Plant, where police lights and other accessories are generally added to the Police Interceptors, or at local customization shops via direct connection with Intermotive.

Torque News salutes Ford’s efforts to keep our Boys in Blue safe – Lord knows their job isn’t easy and they aren’t overpaid, so most of them are out there to make our world safer.

For the record, its not just the boys who wear blue these days – Ford’s new technology helps protect our Girls in Blue, too!