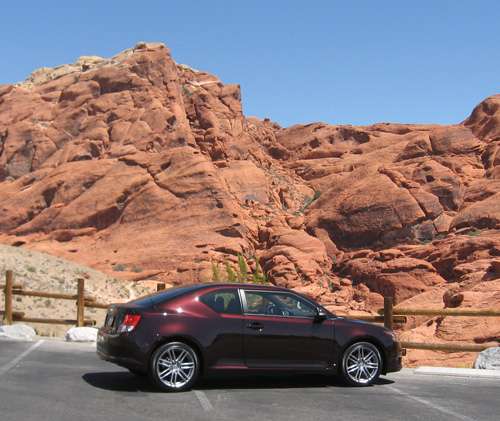 The series hosted by auto authority John H. Davis, had its first show January 3, 1981. The program is produced by Maryland Public Television and runs on PBS, Discovery Velocity, V-me as well as the American Forces Network.

The awesome prize for the one entry per person sweepstakes is an unforgettable Las Vegas excursion including an exotic supercar tour of the spectacular Red Rock Canyon, just a short drive outside the urban oasis.

The winner and their guest will also spend two nights at the fabulous ARIA Resort & Casino in CityCenter, right next to the Mandarin Oriental Hotel. The dates are set for December 4 – 6 this year and cannot be altered. The prize is awarded in collaboration with MGM Resorts International and World Class Driving.

Having been privileged to take a 2011 Scion tC (pictured above) through the canyon some time ago, we can guarantee it would be a lovely place to drive an XKR-S, R8 V10, 458 Italia or LP560-4 – though the press release does not specify what the exotic car will be.

World Class Driving is an outfit that rents exotic sports cars from Audi, Bentley, Ferrari, Jaguar, Lamborghini and Mercedes Benz – perhaps the winner gets a choice of available models.

• Supercar road tour through Red Rock Canyon from World Class Driving – a 30 mile round trip in which you might get to drive three different exotic cars, based on their usual retail packages.

• Two tickets to view the classic cars of The Auto Collections. (A showroom of classic cars from the 1920’s to the present available for purchase – an amazing array including everything from a 1928 Mercedes SSK replica to a 2007 VW Beetle.)

• Dinner for two at Dal Toro Ristorante Italiano and Exotic Cars, located in the Palazzo, where an evening on the patio can be augmented by fireworks from Treasure Island and music from Magic Island.

A prize even the most blasé enthusiast would be ecstatic to experience. The best part is this is not one of those social media contests requiring you to be the most popular this or that.

Each participant gets on entry at this site motorweek.org/sweepstakes or at MotorWeek's Facebook page, where an entry form must be filled out in either case.

The sweepstakes runs through October 29. Those entering must be 21 and legal residents of the 48 contiguous United States and the District of Columbia, with a valid US driver's license. The ultimate winner will be selected from all eligible entries received in a random drawing on or about October 30. No purchase is necessary. To look over the official rules, click here.

Also if you’ve been missing this American auto show, find out which public television station in your area airs MotorWeek at motorweek.org with the find you station button.

Puh-lease DON’T share this – it will cut into my chances of winning!

Tesla Contemplates A New Strategy for China Retail even As Sales Boom
Jay Leno on Elon Musk & EVs: “I Think He Should Get ... Credit"
END_OF_DOCUMENT_TOKEN_TO_BE_REPLACED