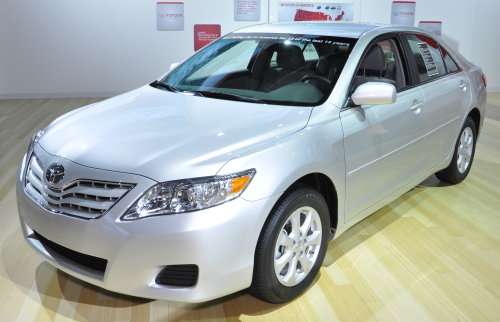 The Most American Car: believe it's the Camry?

For the third consecutive year the ubiquitous Toyota Camry has taken the title of Most American Car despite new competition entering the race. The Toyota sedan is built in Georgetown, KY and Lafayette, IN and has fended off challenges for the honor by newcomers including the Ford Explorer, the Chevrolet Traverse and the GMC Acadia. It is closely followed by the Honda Accord and the Chevy Malibu, which take second and third respectively.
Advertisement

The listing is based on an annual Cars.com’s survey of vehicles focusing on the level of parts made domestically, point of final assembly and units sold to U.S. buyers. The annual report is titled the American-Made Index by the auto site aimed at auto consumers.

"In today's global economy, there's not an easy way to determine just how American a car is," said Patrick Olsen, Cars.com editor in chief. "Most cars built in the U.S., for example, are assembled using at least some parts that come from somewhere else. Additionally, many U.S. automakers assemble vehicles in Canada and Mexico, while foreign automakers have opened plants on U.S. soil. Our index is another resource that car buyers can use to help guide their purchase decision."

Toyota also has the Tundra at ninth and the Sienna at sixth in the top 10, equaling General Motors, who also has three cars included for the first time since 2009. Those are the Chevy Malibu at third, the Chevy Traverse in eighth place and the GMC Acadia wrapping up the list in the number 10 slot. Honda took two spots in the top 10, while Ford and Chrysler placed one each.

"Despite the disaster in Japan, and General Motors usurping Toyota as the world's largest automaker, we're not surprised to see the Camry in the number one position again," said Olsen. "The Camry remains an incredibly popular vehicle, and higher total sales require a higher number of U.S. factory workers and a larger number of U.S. suppliers – all of which contribute to Toyota's ranking."

The Ford Explorer debuted on this year’s list at number 4, a result of 85 percent domestic parts content and Chicago assembly. Chrysler had two models in last year's ranking, but returns this year with only one, the Ohio-built Jeep Wrangler.

Only vehicles with domestic-parts content rating of 75 percent or higher are eligible for the American-Made Index.

For more information about the American-Made Index, visit Cars.com.

almprin06 wrote on June 28, 2011 - 8:09am Permalink
The domestically built Toyota Camry and Honda Accord benefit the North American economy the most, as this list demonstrates. Thanks to Toyota and Honda for employing North American companies and workers to build their cars. Meanwhile, Ford imports the Fusion and Fiesta from Mexico. Uggh.
Rob wrote on June 28, 2011 - 9:49am Permalink
The thing these sort of surveys always seem to forget is where the PROFITS from the car go. Camry and Accord? Japan. Also, the Tsunami affected both Camry and Accord production more than it did the Malibu and Fusion. What does that tell you?
Bobby wrote on June 30, 2011 - 11:26am Permalink
The Camry is about as American as the shit the CEO of Toyota left in the crapper the last time he was in Kentucky. Where do the profits go again? Oh, that's right...Japan. Cars.com has an agenda to kill American jobs and companies, they've been smearing the Big Three for years. Anyone who believes this kind of tripe needs to get their heads examined. Cars.com = Traitors + America haters