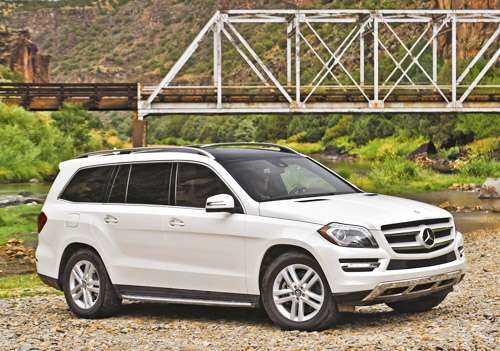 Fresh from a redesign and only now marking its second generation, the Mercedes Benz GL-Class may have a retro look, but it’s definitely looking forward with state-of-the-art safety technology that not only sees impacts before you do, but notices if you’re getting drowsy, too.
Advertisement

That’s because the launch of the new GL ushers in a stellar new safety system, Collision Prevention Assist, which uses a sensor to measure the distance to a preceding vehicle as well as stationary objects. If a risk of collision is imminent, the system charges the brakes while alerting the driver with both sonic and visual warnings.

Other Safety Innovations
Other new cutting-edge safety features include Active Lane Keeping Assist (ALKA), which uses the unique methodology of simulating rumble strip vibration in the steering wheel when the car begins to drifts from its lane with no signals. It kicks in at 38-mph by recognizing white and yellow lines defining pathways. This works with a windshield camera and computer image analysis. ALKA also has intervention feature, wherein braking will automatically correct the car’s course if the initial warning goes unheeded.

Active Blind Spot Assist (ABSA) monitors both blind spots behind and beside the vehicle, providing visual and audible warnings when a vehicle’s in the blind spot, activated by the turn signal. ABSA also incorporates ESP intervention feature if the driver fails to respond.

Besides preparing seatbelts, The Pre-Safe system automatically moves the front passenger seat to a better position for protection on some models, while side windows close to support the side-curtain airbags, and in the case of an impending rollover, the sunroof closes.

All GL-Class models come with four-wheel independent suspension and height-adjustable AirMatic suspension. The GL550 can be easily identified by the flared fenders, aggressive aprons front and rear, chrome trim and 21-inch AMG wheels.

Active Parking Assist
The electric steering contributes to the availability of optional Active Parking Assist, making parallel parking stress-free. When you slow to about 20 mph, the GL even helps you look for a parking space and when a space of adequate-size parking space is detected, an arrow appears next to the “P” icon in info center. When reverse is engaged and Active Parking Assist is activated, the system initiates automatic steering as the driver controls acceleration and braking at speeds below seven mph. After two forward corrections allowed by the system, the wheels are straightened. It also includes an automatic exit feature, if desired.

Sporty Interiors plus versatile cargo options
Inside the plush SUV, you’ll find heated power front seats, genuine wood trim and a power glass sunroof. Other options include a huge Panorama sunroof with a fixed panel over the third-row and multi-colored ambient lighting.

One or both third-row seats can be stowed at the push of a button, providing a totally flat cargo space. A manual Easy-Entry feature comes standard, permitting access to the third-row seats from both sides. Power storage is optional in the second row seating.

The optional hard drive based navigation system, can incorporate SiriusXM real-time traffic info and Zagat restaurant ratings as well. All GL-Class vehicles can have the enviable option of an 830-watt 14-speaker digital harman/kardon Logic7 audio system plus a rear-seat entertainment system including two eight-inch screens, wireless headphones and an integrated DVD player with dual-source versatility.

GL350 BlueTEC – Impressive Fuel Economy
Viable in all 50 states (which is presumably says you can own one in California), thanks to an innovative AdBlue exhaust treatment system that meets the most stringent emissions limits. The diesel-powered GL350 BlueTEC delivers impressive performance, low exhaust emissions and great fuel economy – 240 hp and a whopping 455 lb-ft. of torque. The model features an innovative 3.0-liter V6 diesel engine developing the torque of a V8 and fuel economy rivaling some four-cylinders. Equipped with the latest Common Rail Direct Injection technology, this electronically injected and turbocharged diesel engine is changing American perceptions of diesel power.

The Mercedes-Benz Alabama Plant
Along with the M-Class, the GL-Class sport utility vehicle is produced at the Mercedes-Benz plant in Tuscaloosa, Alabama, which began production in 1997 with the first-generation M-Class. Since 2001, more than $600 million has been invested to expand the facility.