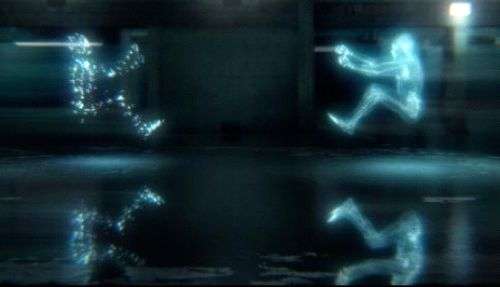 The Lexus Crash Test Genius is no dummy

In the Lexus ad, at first all is darkness, then a human avatar of 119 points of light slides through space as though riding an invisible conveyance when suddenly a much more detailed human form constructed from 2,000,000 points of light, comes in to view from the opposite direction – the two forms collide.
Advertisement

Viewed in slow motion, there is no comparison between an ordinary crash test dummy and a Lexus crash test genius in the throes of an accident.

The spot, titled Light, is intended to illustrate how the Lexus digital crash test model provides an exponential leap in understanding how the human body is impacted by a collision and, thus, the ability to design industry-leading safety technology.

The new marketing campaign made its debut just yesterday, to demonstrate the commitment to Engineering Amazing and its pursuit of future technology. The new commercial continues the advertising campaign from June that highlighted the Lexus Hybrid Drive Technology and Lexus Driving Simulator.

"When a company makes a bold statement such as Engineering Amazing it better be able to back up the message with true examples," says Brian Smith, vice president of marketing for Lexus. "Light picks up where our last campaign left off, once more demonstrating how Lexus goes to great lengths to engineer vehicles that we call future-forward."

Light is the most recent commercial providing an inner glimpse of Lexus by revealiong the simulation technology enabling the fabrication of technologically advanced vehicles. The spot clearly implies how much Lexus can learn from the wealth of data generated by the digital model's response to a collision.

Narration reveals the automaker's rationale by stating, "When you pursue industry-leading safety, you don't just engineer breakthroughs in simulation technology, you engineer amazing."

Lexus will also release a behind-the-story video providing more information on how the digital crash test models provide engineers a better understanding of the human body. The broadcast spot debuts is now in major coverage of broadcast and cable television, satellite radio and a host of social media sites. Billboards will further publicize the campaign with 28 boards in 11 markets, and Lexus will also take over D.C. Gallery Place with three digital units, including a wallscape.

In addition to traditional television and print placement, Lexus is deploying correllating digital media to add depth to the Engineering Amazing message.

For the first time, Lexus will develop an iAd, one of Steve Jobs only ideas that has yet to take flight on golden wings. Lexus is using iAd's functionality to create an engaging experience whereby users can see if they have what it takes to drive an LFA supercar by testing reaction time, focus and concentration with interactive mini games.

In keeping with the theme of engineering the future, Lexus has partnered with MSNBC Digital Network to sponsor The New Tomorrow. The online hub encourages consumers to upload innovative solutions to a solvable problem and "Turn What If? Into What Is."

The individual or group with the best solution will have a chance to attend the renowned Startup Weekend, with the chance to turn their winning idea into reality. Consumers can begin submitting ideas on Sept. 14, and the winning idea will be announced on Nov. 17.

For more information on how Lexus is engineering amazing, click here

Anonymous wrote on November 9, 2011 - 9:04am Permalink
Misleading commercial at the least from an engineering perspective. First, 119 points, I have no idea where you get that from, unless you are comparing to real life dummies and tests. There is no such dummy that exists with 2 million data points, except in SIMULATION, on a computer. If you are comparing a real life dummy test to a computer simulation that is apples and oranges. Manufacturers have been running simulations of steadily increasing complexity since the 1990s; as a record of fact and history, GM was the first to develop the H-3 dummy under Harold "bud" Mertz, with all safety regs being developed as a result. Lexus is simply a follower like all the rest. Simulations returning terabytes of data (millions of data points) were being run int the late 1990s on Cray supercomputers at the Warren Technical Center. The key is NOT how many data points; the key is HOW ACCURATE your assumptions on the computer are to replicate what will happen in reality. That is still art. If you have a million data points and a shoddy model it is useless against a well correlated, strong foundation model with only a few data points tracking the actual testing results. Another example of Lexus marketing trying to look intelligent and being technically incompetent - if your engineering approved this message (which I doubt they did), don't expect me to buy any of your cars.
Anonymous wrote on November 20, 2011 - 3:56am Permalink
I applaud you sir.